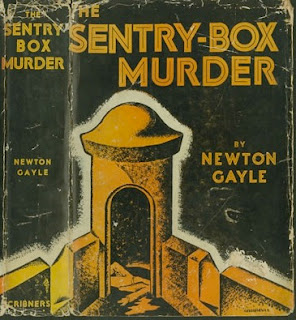 Newton Gayle is now a virtually forgotten author, but there was a time he was very well known: the 1930s. Almost a century has passed since then, and no one remembers Newton Gayle. Nevertheless…

Newton Gayle was a pseudonym, used by a couple of writers (Muna Lee and Maurice Guiness) for a series of five novels, also set in Puerto Rico. The reason for this unusual location is that Lee was the wife of the Governor of Puerto Rico, while the latter was an executive of Shell, one of 5 multinational oil sisters, in Puerto Rico. The five novels, set in the USA, Great Britain and Puerto Rico, had some success in their time, but after the fifth, the partnership broke up, and each of the two authors chose their own path: Muna Lee also wrote non-genre novels. detective, his partner instead wrote three in the sixties, under the pseudonym of Mike Brewe.

ours is the second in the series and the first to be set in Puerto Rico.

The Calypso ship owned by Lord Dampier is forced to stop in Puerto Rico to refuel. On board among others are investigator Jim Greer and his friend Robin Upwood, who will tell the story. In Puerto Rico, they find Richard Piper, a former American diplomat and now Agent of the Atlantic Shipping Company, who, with the help of his beautiful wife Kay, is responsible for guaranteeing a nice vacation to the many tourists who land there every two weeks. This time there is a varied company in which US Senator John Monarch, his wife Melita Avery former actress, nephew Elmery Coulton, the well-known American businessman Blaise Grassington, Fergus Mac Kelvie legal of Monarch, plus the American lady stand out. Stella Tophet. Piper in addition to acting as Cicero around the island, has prepared, as done on other occasions, a treasure hunt that will involve them in the headquarters of the island's fortress, the Castle of San Felipe del Morro, known as "El Morro", in San Juan de Puerto Rico: a series of clues will be located in various parts of the fortress, including the dungeons, the walkways of the patrol, and even the sentry box; each clue will provide the key to find the next one, until reaching the end, first.

The treasure hunt takes place and everyone is involved, until it happens that in the sentry box, watched by two soldiers, Monarch is found dead, shot in the face: however, no one has seen the murderer come out, nor is it clear how Monarch was killed. (or killed himself) because the gun is not found.

Directing the investigation is Greer who assists Colonel Oakley Chief of Police.

At first, the first to be accused is his friend and narrator Upwood, because a lady, in the dungeons, at first glance attributes to him a voice that spoke of a crime to be committed, but then later retracts the his statement.

Greer hears everyone, reconstructs the facts, sends requests for information about the various members of the cruise to Washington; then he finds a pack of three shirts, with something written on the cuffs, behind a bush, near the party's residence, and reconstructs the fact that Monarch, the night before the treasure hunt, was seen terrified coming out of that bush, and then ask for a gun first from Mac Kelvie and then from Grassington, who became friends during the cruise.

What had he heard? Someone threatening him with death, with the voice of a dead man, someone from a company that he had forced to fail and then had taken his own life.

To tell the truth, there is also the story of a ghost that manifests itself in El Morro, and there are those who would like to attribute to a supernatural cause, something that will then be rationally explained.

Greer will be able to figure out how Monarch was killed, and who killed him, by practicing an almost perfect plan, after a whole series of people have been discarded, "after being first observed in a special light". 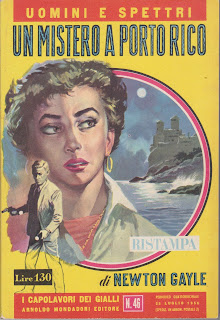 The novel is a little-known Locked Room, from 1935.

In the John D. Carr biography by Doug Greene, The Man Who Explained Miracles, there is no reference to this novel, strangely I would say, because at the time it had some success: sure, it could also be that Carr hadn't read it, but the reason could be attributable to a series of evidences: in essence the method of killing is not peculiar to this novel, if anything a procedure already seen in the expression of one of the crimes in The Greene Murder Case is applied, and not to chance can be said that the novel is in the wake of the Van Dine School, because the same James Greer, seems to be a pale heir of Philo Vance, even if he manages to come to the head of the mystery with rare sagacity, and the investigator assisted by friend narrator, who helps the police chief, leads directly to Philo Vance, Van Dine and Markham.

And after all, if we go back in time, precisely because of the mechanism used to kill, we can say that the couple of writers have borrowed methods even further back in time, those used in novels in which, for example, "the room killed ". So if the murder weapon refers to other novels, the inventiveness in presenting it is original, especially since its disappearance is explained by the crime itself. If anything, having revealed it many pages before the solution removes the bite and tension from the climax, which decays, being only increased in the final closure.

Another fact that could perhaps explain why Carr never mentioned him (despite Muna Lee was the second American writer to join the Detection Club), can be explained by the fact that the murder weapon, it is said in the novel, is difficult to carry. on him, yet someone wears it; and although the sentry box is structured in a certain way, presenting a circular chamber (the sentry box is the turret in which the sentry finds shelter) and three loopholes placed in the semicircle of the walls, it is not clear or explained how the murderer would soon have time fixed the deadly device.

The pair of authors, indeed, during the novel, invents many false leads, which lead the reader to hypothesize that various subjects in turn may be the killers, generating an interest that does not fail, up to presenting 4 possible turns in the final solution in turn murders, perpetrators of 4 different situations that enter the solution as a corollary, as regards ... the package of the three shirts behind the bush, the gun disappeared on the ship, the false construction of the page with compromising annotations, and the annotations on the floor plan with the postcard of the sentry box of El Morro: one of these four will be the killer. The least likely. And therefore the most surprising.

Beautiful novel from the golden age of mystery!