Gilbert Keith Chesterton : The Wrong Shape, 1910 (from The innocence of Father Brown, 1911) 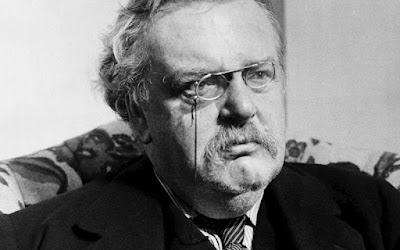 It was a long time I wanted write something about Gilbert Keith Chesterton, the great English
Catholic writer, author of phenomenal books, like that about  St. Thomas Aquinas, which earned him the appreciation of the Pope, Pope Pius XI (the Pope forgotten, who was about to utter the historic encyclical against racism and anti-Semitism, when he died in 1939 before signing it).
In appreciation, Pope Pius XI appealed Chesterton with the title of Defensor Fidei , a title that was not disclosed in England as it would  appeared humiliating that a British subject was called in the same way inherited from the kings of England, since Henry VIII. But so is the story: Chesterton, who converted himself to the Christian faith, gave so many proofs of true conversion in his writings to earn to himself  the praise of the Vatican. 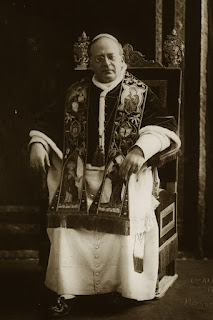 At his death to officiate the ceremony of the funeral was called another Catholic writer and prelate, Msgr. Ronald Knox, author of several mystery novels.
The conversion to all effects is on 1922. But evidently it had to take place in stages, and already some time earlier, at least a decade: in his writings were hints, not so hidden, to a desire to convert. Even those among his writings, that would appear less suited to this: I'm speaking  about the Father Brown stories, detective stories centered on the figure of Father Brown, a very keen Catholic priest in his reasoning, who knows go down the hearts of men and discover the worst atrocities by the force of Faith. The figure of Father Brown was conformed to that of the priest who worked in him the conversion, Father John O 'Connor, Irish Catholic, who stood close him until the death. However, while the protagonist of his Father Brown stories is a scruffy little man, always with an old umbrella, the original was not so scruffy. 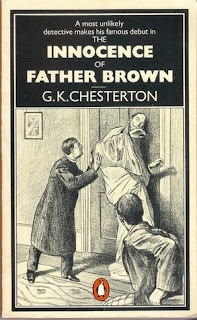 To Father Brown were dedicated several books, once the character gained an unexpected success: The innocence of Father Brown is the first of them. It’s formed by the first dazzling tales: The Blue Cross, The Secret Garden, The queer feet , The Flying Stars, The Invisible Man, The honor of Israel Gow, The Wrong Shape, The sins of prince Saradine, The Hammer of God , The eye of Apollo, The Sign of the Broken Sword, The three tools of death'. The first four of them to be published, were put together to form a collection called The Father Brown stories, then extended to bring together all the stories. The most metaphysical of the first stories, an authentic masterpiece, like The Blue Cross, is The Wrong Shape.
The story begins with a description: it’s showed a low building, coloured white and pale green, with shutters and a terrace, with umbrella sheds, and with a strange T-shape. In this – it’s a summer villa, just outside of London, to the countryside -lives the poet Leonard Quinton, famous for his exotic poems, in which he often speaks about havens and eastern hells. Here is also hosted Father Brown, because his friend Flambeau had been a friend of the owner in Paris. Just arrived, the priest warns at the atmosphere, a strange, wicked aura. And perhaps the same T-shape, a T imperfect feeds his doubts. This T-shape, is such that the leg of the T, the shorter arm, is made up by only two elongated and interconnected rooms: “..the first of these two rooms was the study in which the celebrated Mr. Quinton wrote his wild Oriental poems and romances. The farther room was a glass conservatory full of tropical blossoms of quite unique and almost monstrous beauty, and on such afternoons as these glowing with gorgeous sunlight”, where Quinton, aided by narcotics, dreams and ponders his outbursts of fancy.
In the villa, the poet hosts an Indian guru who enjoys hospitality there, supplying the poet inspiration for his poems. Besides him, other few people: the wife of the poet, a woman who for many years caring for her husband who has exceeded opium to describe dreamlike states it caused, and now it has become sullen and by unstable nature ; instead she is a lovely creature, serious, poised and with a great mass of golden hair, but, as Brown says, “That woman’s over-driven,” said Father Brown; “that’s the kind of woman that does her duty for twenty years, and then does something dreadful”.Finally there is the brother of the woman, Atkinson, a parasite which appears dressed in white, with a garish red tie askew and a hat on the crown of the head, which is always on the hunt for money to squander, without a job and an occupation. He’s detested by the poet's physician, Dr. Harris, a little man with a mustache, very ordinary-looking but capable.
Father Brown felt something evil there. Attributes it not only to the shape of villa but also to the Indian holy man, a magician. Wrong shape for him has also a strange dagger with a wavy blade, made not to cut but to torture, in the tall grass of the garden: “Why, look at it,” cried Father Brown, holding out the crooked knife at arm’s length, as if it were some glittering snake. “Don’t you see it is the wrong shape? Don’t you see that it has no hearty and plain purpose? It does not point like a spear. It does not sweep like a scythe. It does not look like a weapon. It looks like an instrument of torture.” Father Brown look at the Indian holy man, and at his Indian writing: “They are letters and symbols in a language I don’t know; but I know they stand for evil words,” went on the priest, his voice growing lower and lower. “The lines go wrong on purpose—like serpents doubling to escape” .Father Brown scowls, getting lost at a mystical fog. The same his friend Flambeau recognizes before to the astonished doctor, that when Brown seems lost in mystical discourses that seem crazy, bad things happen then. In a way Father Brown  is a psychic. In front of the doctor who denies his allegations, Father Brown says that while the house is ridiculous in shape but it is not wrong, that dagger is wrong: it is the prologue to the wrong forms.
At that moment Quinton greets the onlookers because it has to go for the usual afternoon nap. Mrs. Quinton comes home, and the doctor goes by his client to make sure he sleeps well and takes the tonic, but in that while the inept brother manages to sneak in the study before the door is closed, so to check an half pound to same  Quinton until before the poet falls asleep.
The clouds are gathering and air manifests the typical electricity announcing the impending storm: Father Brown and Flambeau see the Indian holy man who passes in front of them; for them he’s like a bird of ill omen . As they see him once again stand in the garden near the house, gets out of breath doctor Harris learned who accuses the brother-in-law of Quinton, to have done something  against Quinton: in fact he has seen through the window that his client lies in an unnatural position. Worried, rushes toward the house, followed closely by Father Brown and Flambeau, while Atkinson remains behind. 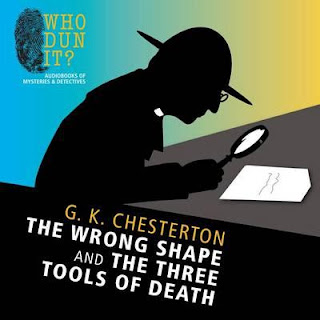