I want point  that because I will thrash out its contents, I will give the story solution:  whereby those who have not read it yet, please do not read this analysis. 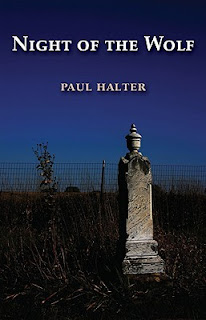 In 2000, at the dawn of the new millennium, Paul Halter wanted to bring together a series of short stories he had written in previous years in a collection, which he called La Nuit du Loup. Later, in 2006 was published also an edition in English - entrusted to the John Pugmire that two years earlier  had translated the works - which, however, was noticed to be different from the original. In fact, while collecting La Nuit du Loup had 9 stories, instead THE NIGHT OF THE WOLF  contained 10.
Going to see well, however, you  notice not only the obvious presence of a story in most, but also the addition and replacement of others. In fact, the story Un Rendez-vous aussi saugrenu for the untranslatability into English of the used form of French that did not fit to be otherwise translated without losing the characteristics on which it was based , was replaced in the edition in English, by the story  L’Abominable bonhomme de neige (The Abominable Snowman), while to it even was added another, Le Spectre doré (The Golden Ghost). 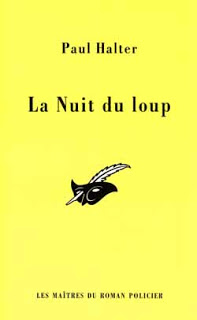 One should not think, however, that the stories were kept in a drawer and then published for the first time on the occasion of the publication of the anthology; several of them had been translated into other languages: 2 (The Tunnel of Death and The Night of the Wolf) had appeared between 2005 and 2006 on EQMM, with John Pugmire translation, while that of Peter Schulhman had appeared in 2004 always on EQMM, The Appel of Lorelei; in addition 5 short stories  had been translated  by Titian Agnelli and published in Italy on"Il Foglio Giallo", the publication of “Il Club del Giallo”, an association ( extinct a decade ago) that twenty years ago still brought many fans and to which also belonged Paul Halter as an honorary member: Ripperomanie and  L'appel de la Lorelei in 1999, La nuit du loup, Les Morts dansent la nuit and La Hache in 2000. Why were these stories chosen?
Paul, consulted by me  several months ago, explained it in two short lines, whether it was by chance he preferred that story among all other of the anthology to give a title to his anthology:
«Cher Paul, depuis quelques années, je dois votre collection La nuit du loup, mais je ne l'avais jamais lu seulement l'histoire qui a donné son nom à la collection (comme je l'avais lu quelques-uns des autres). Je suis restée muette. Nous sommes face à un chef-d'œuvre, avec trois fins différentes, chacune plus étonnant que les autres. Je me suis senti la même forme d'aliénation je me suis senti à lire La quatrième porte. Vous avez appelé la collection La nuit du loup,  idéalement lacer l'histoire éponyme, je pense. Je dois penser que vous considéré comme le meilleur des neuf ? »
«Oui, Pietro, vous avez raison !Enfin oui et non...J'ai bien aimé cette histoire de loup, avec une chute un peu fantastique... La meilleure? Je ne sais pas... Peut-être ex-æquo avec La HACHE, LA LORELEI et LES MORTS DANSENT LA NUIT. Mais d'aussi loin que je m'en souvienne, j'ai dû emprunter son nom pour le recueil de nouvelles, sans doute par ce que c'est celui qui me plaisait le plus. »
For those unfamiliar with the French, Paul essentially says the stories he remembers with more pleasure among all stories of that anthology were La Hache, LA LORELEI et LES MORTS DANSENT LA NUIT, and that I have reason to think that in essence, having been named the anthology with the same title of a story, exactly that story was undoubtedly his favorite.
This judgment, own by the author, takes out all the arbitrary ratings, appeared on various sites, according to which, one more than another or another, were the best. I personally in addition to La nuit du loup which is an absolute masterpiece, equal to some story of the most inspirational Carr (The Door to Doom, for example) I think another very good is Les morts dansent la nuit, which is reminiscent of the atmosphere ( a crypt containing the family tombs) The Burning Court or The Sleeping Sphinx by Carr or even La chambre du fou by  Halter, but it is an entirely subjective judgment.
Here the contents of the first edition:
L’Escalier assassin
Les Morts dansent la nuit
Un Rendez-vous aussi saugrenu
L’Appel de la Lorelei
La Marchande de fleurs
Ripperomanie
La Hache
Meurtre à Cognac
La Nuit du loup
And here's the English edition, in which the original index was changed:
The Abominable Snowman
The Dead Dance at Night
The Call of the Lorelei
The Golden Ghost
The Tunnel of Death
The Cleaver
The Flower Girl
Rippermania
Murder in Cognac
The Night of the Wolf
What kind of stories are presented?
Obviously Locked Rooms and Crimes Impossible, although there is also some story  who escapes this classification posing itself like a freer story.
If we are going to analyze them quickly, accumulating all the stories, both by  the French edition and by the English edition, we can try a quick classification:
Classic Locked Room
La Marchande de fleurs (appearance of Christmas gifts in a sealed room)
Murder in Cognac (poisoning at the top floor, closed inside, of a tower)
Les Morts dansent la nuit (Classic Locked Room: crypt sealed from which horrible laughs come)

Variation of Locked Room on the snow

L'Escalier assassin (a crime accrued on a sliding scale, about half of the same, given that neither from the right nor from the left was someone who could kill)

Ripperomanie
Un Rendez-vous aussi saugrenu
La Hache
Certainly it’s not sufficient an article to describe and to analyze all the Halter’s stories, so I will say only that the protagonists are different: Owen Burns, who is located in stories of the past, is a character modeled after Oscar Wilde, who even in Italy is not known because none of the five novels in which he is, was published. At that time, however, only two they had been, however, already quite sufficient to assure him fame: Le roi du désordre (1994) 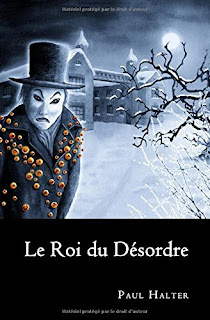 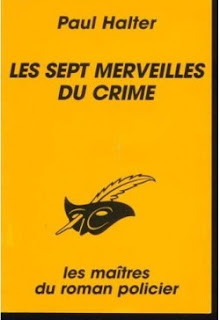 Alan Twist is living adventures dating back to the 30s-40s. However you note that both Burns and Twist  in these stories are not accompanied by their shoulders: Stock and Hurst. 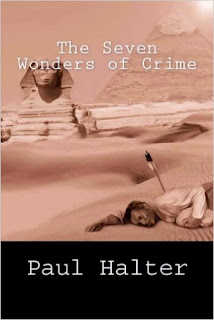 Despite the presence of the two characters, none of them appear in the best story ever, I do not hesitate to call a masterpiece. If there is a perfect story in Halter, no doubt, in my opinion, it is La nuit du loup.
The story begins with a father who is scolding his little children to not even know how to hunt all alone. And while his companions are intent to divide a deer, his little implore the father to tell a story. And so the old man, though reluctantly, tells the story of Pierre Loup, a friend of his and of his death in impossible circumstances.
Pierre Loup was a man who lived in a wooden house, equipped with laboratory, in the middle of a clearing in the wood. In the nearby village of Malmont, who in Lorraine is at the foot of the Vosges Mountains, close around a church, under a blanket of snow that seemed to protect it from the outside, they spoke softly praying that the werewolf, who had killed twenty  years earlier, didn’t  return to claim victims.
Loup was disliked by the local community because since many years one of his favorite sports was to establish extramarital affairs with many women in the country, so that he had become unpopular and he lived in a house in the woods in the middle of a clearing, together with a dog; his only friends were the Commissioner Mercier and the widower Dr. Loiseau.
During a night it happens that to the door of the Commissioner Jean Roux knocks a small man, so old that age was not definable, dressed in well-made clothes, but covered by snow that asks him to take shelter by the blizzard, on that night. At first, the Commissioner can not decide: but even if he doesn’t  explain for which cause in a snowy night like that, one man is still around, his conditions reassure him. And so, after having refreshed and heated, while the one having in the hands a thick grog, fixes a big dog wolf sleeping on a mat, tells him the impossible story  to explain of the assassination of Pierre Loup: two days before , his former superior Commissioner Mercier had heard barking in the night; a few hours later, Dr. Loiseau, he had woken up because he was worried that from the area where  lived Pierre Loup had heard screaming and shouting in the night.
So in the light of a lantern they had penetrated into the wood, despite Loiseau walked lame (with the stick) because his dog had bitten his ankle, and here, in a clearing all cloaked of snow, they found the door of the cottage of old Pierre, wide open: from the path where they were, to the house, were visible imprints of animal, probably of a wolf. Only those. In the house they found the horribly disfigured corpse of Pierre, as if claws and fangs had torn him, with a dagger driven into his back.
Commissioner Roux indicates to Dieudonne a  wolf dog sleeping  and suggests it could be responsible of the master’s death if the master was just torn to pieces,  but he was also stabbed and so, even if  the dog had been to tear him to pieces, then who had stabbed him should have left footprints, which instead were not found.
In the snow nothing in addition to their footprints to the house, the prints of a large dog or wolf, and of course the holes produced by the stick whom Dr. Loiseau had used. Nothing else. 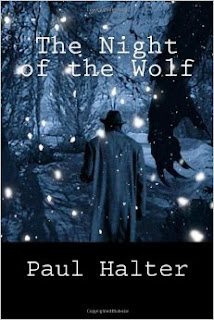 
If we should believe the rational solution, the culprit has to be only Loiseau;
but if we give credence to the fantasy story, also the solution it becomes.

And why should we not think that if Loup is really a werewolf, can not really be this thing his son, whom had been indicated so from Mercier and Loiseau?
Dieudonne could  want to protect the son "handicapped" by Loup: a great big son with a brutal force, but with the brain of a child. We suppose  the child had discovered who had killed her mother many years before and had conceived a plan to revenge his mother, killing  who had killed really her (his father, Loup) and blaming that man who had betrayed her (Loiseau): also so the thing would make sense. To put it succinctly: if history is processed in a real universe, it may have only one development, impossible as it may seem at first; if it is processed in a fantasy universe, the solutions can be varied.
That's because I speak of a true masterpiece.
I notice  also that Halter could have thought to use the solution of this tale for a following novel  perhaps varying it in something: in fact, how could we not remember the solution into A 139 pas de la mort ?


Even there we have a variation of Locked Room and the solution directly relates to the solution of La nuit du loup: in fact, the 2 wooden rafters long  1 meter  in which are fixed four large nails, short in length, leverage the same solution used here: very low stilts that in the story have to confuse the tracks so that you think the tracks are made by the doctor's stick tip, and at the same time support the weight of man without any chance to fall to the right or left).

In short, everything and the opposite of everything in the universe by Paul Halter.