Joseph Commings: Ghost in the Gallery, 1949 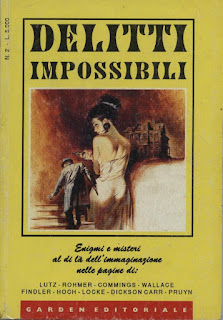 Joseph Commings is an author that every lover of Impossible Crimes and Locked Rooms should know.
Born in Mount Craven in 1913, Commings dreamed all his life to become famous. But in life you have to have luck, and Commings not had it, although he’s considered by critics as one of the greatest authors of stories with impossible crimes, like Hoch, Rawson or Carr. He created the colossal “Senator Brooks U. Banner”, the equivalent of “Dr. Fell” by Carr, who made his debut in the tale Murder Under Glass of March 1947, published in the magazine Ten Detective Story. Later began publishing stories in another magazines: Ten Detective Aces,  The Mystery Digest Magazine. The most important magazine was E.Q.M.M., but while subjecting his works to Dannay, he did not have the good fortune that they were upheld. Disappointed and depressed, Commings wrote other stories with Banner in 1957, when the Mystery Digest Magazine welcomed his works in his pages. If the collaboration with this magazine went on until 1963 -since 1961 he was also chief editor - until 1968 began one with another magazine, The Saint Mystery Magazine, for which he published a few short stories.
Failing to get along easily, he wrote also porn stories, as his dreams promptly crashed; and also his hopes that someone would offer to pubblish his novel with some locked rooms or impossible crimes, which never happened. It is known that at least a novel with locked room he wrote, but then he burned it because no one was agree to publish it. Since 1979, the fortune he thought to minimally be favorable, and finally another tale with Banner, written together with Hoch, could be published. He died at Edgewood in 1992. The last tale written, The Whispering Gallery, remained unpublished until 2004 when it was published in the anthology Banner Deadlines, by Douglas G. Greene Publishing House, Crippen & Landru.
Ghost in the Gallery, was published in 1949 by the magazine Ten Detective Aces.
The story begins with a plot twist, and already in this denotes a certain originality: Linda Carewe has killed her husband DeWitt Carewe. After have killed she runs into the arms of her lover, Borden Argyll, an accomplished painter. A classic. She has killed him giving five grains of arsenic. It is not murder to wickedness and greed even though in this case would resort assumptions, but out of necessity: she married her husband eight months earlier, having known a year before. In the knowledge that never became true in love but rather a sort of disturbance, they were merged various instances: the man's wealth and his economic modesty, and age: he forty years, she twenty-three. But what had attracted her was his energy inhuman: sported a confidence that she had not, and produced wealth where others failed. However on him were rumors about his demonic nature which although not true testified that doing the good deed was not his prerogative.
Obviously Linda is surprised when she sees him entering the gallery, where are she and Borden, just her husband with a cruel grin, who accuses them not to have murdered him because he is immortal or nearly so, and challenges them to conclude their enterprise . Having said that, he  disappears around a bend of a corridor. They follow him, so much for stopping in front of a door on which is written “Administration”. The glass door, permits to see everything inside the room: there is, Satan himself, DeWitt Carewe behind a desk. Only him. No other exits except the one behind which they are. Turn off the lamp that is on the plane. Argyll in turn strikes a match and opens the door. Linda does not want to because she fears for the life of Borden but what is the surprise when, after turning on the light in the room they don’t find DeWitt but Phillis Remington, the model of Borden, just killed. But DeWitt? Where did he go? How did he get out of the room, the door of which was guarded by his wife.
While they are racking their brains,  comes to the gallery the director, George Honeywell. Questioning, they find out where it comes from him, that is, from his room, he did not see anyone. In other words. Carewe has disappeared. As they walk in the gallery are facing a picture painted by Borden in supernatural subject: is a werewolf who has the appearance of DeWitt Carewe intent on to tear the flesh of a woman with the features of model murdered. It turns out then that the two had been lovers even before he got married to Linda, and she was blackmailing him because they do not blurt out to his wife who had continued to see each other after marriage. The motive of the murder then would blackmail.
Honeywell going to call the police and in that moment Linda hears a strange noise, like a Venetian blinds which are lowered. Except that in the gallery, Venetian blinds there are none.
The hours pass, and the police are not in charge of the arcane. Borden decides to turn to Senator Banner, an expert on crimes impossible: he knows him because he has portrayed him long ago.
Banner is introduced into the gallery by a policeman that there works.
After explaining everything to Banner, even the strange noise, he comes to know that nearby there is a room where the Chinese shadows are projected. Unrolls the screen and see ...
Needless to say, behind the screen, he finds the corpse of DeWitt Carewe, hanged. Resolved the disappearance. Il corpse was in a space of just thirty centimeters between the screen and the back wall: suicide or murder? 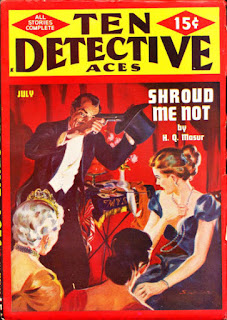 Senator Banner solves the riddle by explaining how it was possible they didn’t find Carewe in room while they had found the body of his mistress; and it does so by applying optical physics concepts. In this it seems to me that the explanation comes close to that of one of two murders at The Hollow Man by Carr. And he explains how the same Carewe and her lover have been victims of a ruthless puppeteer, who killed them, pretending to be in agreement with him to cheat his wife.
The story is a gem, a masterpiece, chosen along with other stories, by Adrian Jack & Robert Adey for their highly successful anthology The Art of The Impossible, has not only a great mystery of the Locked Room solved brilliantly, that essentially no meet any of the three temporal instances, valid to explain a crime in a locked room(before crime committed, the crime that takes place in the moment, crime committed after) because the disappearance of DeWitt Carewe happens elsewhere, and the special nature of the door, of the dark and of the faint light, causes the creation of a illusionistic effect that you may believe that DeWitt is in a room rather than elsewhere. No, the story also has an amazing atmosphere.
Commings since the first lines creates the conditions so that you may believe in DeWitt as a human being by the demonic nature: his appearance; the rumors about his demonic nature (vampire or werewolf); the place where Linda had met him for the first time, a forest, in which the earth and the sky was the same pale color (the color of death); the rustling of leaves that Linda should have interpreted as a warning about the nature of that human being who was in front, when they had met.
Not only.
It seems to me extraordinary that Commings, with a parallelism, a rhetorical figure of undoubted charm, creeps before the murder is fulfilled, even before the crimes are committed, the very idea that death lives there: in Autumn the afternoon is rainy and gloomy; the heavy shower  makes the Honeywell gallery, covered with marble dark green (a marble used in cemeteries), of the same colour of a tomb. And that the same crime and the murderer's disappearance, are to be charged to the facts of a supernatural nature, to be related with the pretended demonic nature of a human being of which have been previously hypothesized characters. In essence, the whole story is an illusion.
Until the final explanation, everything that happens, has the purpose to be misleading: the alleged nature of DeWitt, the murder committed in his detriment by his wife (we are in another case in which arsenic is used as the murder weapon without being, impetuously crime mean: in fact arsenic kills at a distance of at least three days, and not immediately), the first murder and the disappearance of De Witt, the second crime, the noise Linda hears, the painting that is almost the representation of crime that is claimed to be just occurred (the killing of Phyllis by DeWitt), the dislocation of DeWitt, the killing of the model. His same motive is offered to the reader, before you understand that he was the murderer.
It’s clear that this story is not a real whodunnit but a real howdunnit: in fact approaches more properly to the mystery of the French type, at which as is not important identifying the murderer as is important explain how the murder was committed, because it will the explanation to nail him. It’s also clear in order that this happens it is necessary there aren’t many suspected but extremely few, as in this case.
Two other things seem interesting in this tale: how the killers are introduced (the alleged and actual), and Senator Banner.
The alleged murderer, DeWitt Carewe, we mentioned how he is introduced in order that you rightly think that he is an human being by demonic nature. That makes use of his limbs to perpetrate an impossible crime: perhaps that the devil can not disappear from one place and appear elsewhere? The rest is to be of supernatural (divine or demonic) beings have the gift of omnipresence. However, even the true murderer is introduced in a certain way: he has a bald head, a round big face, a prayer robe, glasses tied with a black lace. A description that is very close to that of Dr. Fell. Possible that the murderer is likened to Fell? It can be if you see him, not so much the ruthless murderer, when the human being who achieves an almost perfect crime, that sublimes the very concept of Locked Room, to do one that calls the murder the most extraordinary explained by the same Fell in The Hollow Man.
Also Senator Banner, too, is described in a characteristic way: the paunch, the shirt green striped mint and white color, the figure of King Kong, red suspenders, his greasy tie as if it had been soaked in the soup ( and it had happened just that !!!). Which does he resemble to? I think to Merrivale, the Grand Old Man, who very often is ridiculed in his appearance before as usual he solves the most mind-blowing puzzle: in order to the paradox succeeds and it’s enjoyable, it is necessary that the crime is solved not so much by a Philo Vance who in the long time is unpleasant but from which would seem to be the only person not able to solve it: Senator Banner in this case.