Anthony Abbot : About the Murder of A Startled Lady ,1935 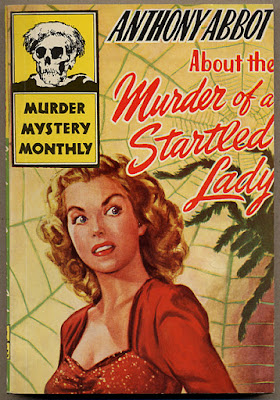 In America, at the time of Van Dine, Abbot was one of his most important followers.
He wrote eight novels since 1930 :  About The Murder Of A Startled Lady, 1935, is the fifth.

Anthony Abbot (very name Charles Fulton Oursler ) was a knowed writer and pressman: with other writers, connected to S.S. Van Dine, he partecipated to a legendary mystery (legend, certainly not a masterpiece, but more like a curiosity): the novel was born from a bet, in 1935, during a dinner with the then U.S. President Franklin  Delano Roosevelt. The same Abbot was present, which with his real last name was  Director of the New York Newspaper "Liberty": He thought from the innocent subject of the U.S. President could have derived a novel, and then alerted a number of writers to write the chapters:  The first chapter was the turn of Rupert Hughes, Samuel  Hopkins Adam the second, then came the turn of the same Oursler; then succeeded the comedienne  Rita Weiman, and the famous S. S.Van Dine. Finally John Erskine.
The work was serialized in Oursler's Liberty Magazine in 1935, and the book was published in 1936. After thirty years Erle Stanley Gardner (creator of Perry Mason) remembered the story and he wrote a final charter, an Appendix in which Perry Mason and Paul Drake pulled the threads of the story. The book was reprinted in 1967 and retitled The President's Mystery Plot.
But we go back to our novel, to About The Murder Of A Startled Lady .
The story begins with a seance: Mr and Mrs Lynn, self-styled spiritualist, refer to Professor Gilman, a scientist who converted himself to parapsychology, had learned from a spirit of a crime happened long before: a certain Madeline would have been killed, dissected and closed in a box thrown in the waters off a popular beach.
Thatcher Colt, High Commissioner and Chief of Police of New York, only for the sake, without believing all the mediums and the like, secretly sends his men and a diver to check the news, and to his astonishment, the case is found , and in it they find a totally decomposed corpse, a skeleton in short, at a lot of pieces: 200 or more bones.
In Colt's own house is reassembled the skeleton, but are not data that may be valid for identification: the clothes are almost completely destroyed, the case is cheap, the victim's teeth are perfect.
The victim was shot through the forehead, and in fact the skull is a rattling noise when you shake: is the bullet of a caliber 32. And since it does not appear to have been any complaints regarding disappearance of a young woman, Colt decides to rely to Imro Fitch, a failed sculptor but a genius at the same time that mixing anthropomorphic knowledge and sensibility of an artist basing on accurate anthropometric relationships, reconstructs the face as it presumably would have been.
Fitch makes a true work of art and life to the skeleton. Also, basing on the few remnants of clothing, he find any similar clothing, one that should have been wearing Madeline in his last days of life. From here begins the survey itself: you get to the victim's identification: Madeline Swift, 22 years.
Close relatives of the girl revealed a strongly suppressed family. Father and paternal grandfather fanatical religious: the grandfather, manufacturer of amulets; the father, a dealer in sheet music and records; her mother, a milliner, enslaved to his father; her sister, Verna, had been hospitalized for exhaustion nervous. In short, an environment that could not stand the exuberance of Madeline, girl described so old too modern for that environment (a reaction?): Smoked, drank and collected stories of love. Until .. until you fell in love with a certain Alfred Keplinger, a university student. And here was derived from a furious argument with his father, who did not want her daughter frequented such an individual .. Well .. the first motives emerge and the first suspect.
Apparently the girl was frightened by whom? It is not known. He said that a mysterious person followed her: policemans find a taxi driver who had brought the girl, but he does not know where she went but he knows from where he had taken her in the car: the house is that of an influential Democratic politician, Daniel O 'Toole, connected to the District Attorney, whose elections are short term.
Then, interrogating Keplinger, we learn that he was a medical student, who tells how her Madeline was misunderstood. But does not say everything. Colt finds out and put under surveillance, the switchboard of the building where home is here and confirmed his suspicion: the young man talks to his sister he did not say anything. Bottom line: Keplinger is stopped.
From the investigation you transpire that some of his entourage and even a politician, harbored resentment. And that the same seance had been rigged: Colt discovers that the voice had revealed to the medium where to find the chest with human bones, he had not felt in a trance nor had dreamed, but had a presence in her room . The strange thing is that when she heard these things she was alone: there was no one else, not even her husband, and the door was closed by a bolt inside. An inspection is done: if at first you think of a concealed microphone and connected to the antenna cable, it turns out that the branch was covered with a cobweb, a sign that was placed at the corner of the window at an earlier time 'arrival of Lynn. This leads to looking further at Colt's room, finding a removable panel and a hole in it that communicates with the adjacent apartment.
So as you can see, many suspects and little evidence.
Colt understands who the murderess, but has no evidence.
Then he tries going for broke: relying on improvisation. Who could he be?