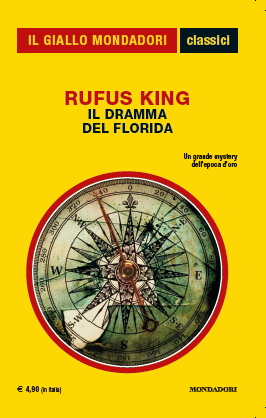 I imagine that many have realized that Rufus King is one of those writers that I like very much. And not just because he could write very well (he was a born writer), but also because he is one of those authors, who were acclaimed in his time, and then just as quickly forgotten. But if by other authors, it may also include, in his case, it becomes a puzzle: why Rufus King was forgotten?

Rufus King probably I think (and I wrote in my essay published two years ago on the Blog Mondadori) in the first fifteen years of its production, was a highly original author, or at least enough to be copied as a model, but then paid other authors in the meantime risen to the headlines, library duty, changing the tenor of his stories and his characters conforming to the characteristics of others.

But since I'm basically a romantic, I love to remember those who have been forgotten, in my opinion not a good reason: so I am pleased to recall Rufus King. Murder by Latitude, is remembered as one of his six novels most characteristic and emblematic: some will have identified some characteristics typical of gay work. Of Rufus King, nothing is known because he was so reserved that in comparison, Derek Smith, "was well known." And his photos are few.

The features gay, are scattered: I'm not going to list them: if they will be in or not I'm not interested. The fact is that the characteristics of gender (masculine friendships, but not both) are mentioned in the novel several times for various male characters, although the most recognizable is that between Gans and Swithers (but also hinted that there is between a character and a sailor of engine room).

Beyond this the novel has a characteristic typical in Rufus King: the wise use of power, that insinuates itself at first, then becomes palpable and finally spasmodic, with surprising end and never predictable. Even here, the suspense is the host.

Gans, the radio (the radio operator of the time we would have said) is found murdered on board the steamer "Florida": why should someone kill a radio operator? To prevent it from passing a dispatch of utmost importance to Lieutenant Valcour, the Metropolitan Police of New York, on board too, along with other passengers. Embarked, because even if you do not have the physical characteristics, he and other police authorities know that among the passengers is the murderer of Larry Lane, a rich man, killed in the toilet of a nightclub in New York and robbed . The killer was also seriously injured friend of Lane, but he has survived and he has helped to make the identikit and emphasize the physical data of his assailant. Now the killer is on board the Florida, because he wants to get to Cassie Poole, rich lady of high society, previously married to their first marriage Lane. Cassie after having divorced (and others) from Lane, was married to Ted, a man much her junior, met at the beach. The killer wants to kill her? He will really kill her? But why?

You will find that Cassie at the time of her first husband, had adopted a child for a short time, Toody, who then had, at the age of nine years, repudiated, along with his aunt, while paying an annual check.

There's a testament that Cassie should not have done, in favor of her new husband, who forces the killer to make a widow, to make void the last testament, and instead re-reverse the previous. For Valcour it is one of the most difficult investigations of his career: to discover the murderer, among false rumors, strange disappearances of objects (a silver thimble, a long needle and embroidery scissors snap, pitch), among reluctances,  among smugglers of jewelry and phoney characters identified, while the ship is abandoned to itself, in the sea.

The ending is really surprising: in some ways, is very similar to the final catharsis of The Twin Siamese Mystery by Ellery Queen, another vandinian writer as Rufus King. Some critics argue (I think that may be right) that the name Queen could be the answer to Rufus King.

In the novel of the Queen, Ellery and his father are in a villa ( where it wears a dark tragedy), which is located on top of mountain ledge ,while below the flames devour the woods and there almost to attack the house; here the characters are on a ship which is at sea, which is isolated in the sea (because the radio operator died), and whose rudder was damaged and whose instruments (compass) has been deliberately altered, so that it goes drifting: here is the final cathartic is the crash on the rocks (which allows the ship to run aground), but then we will be questioned  until (Valcour, Sohme the captain and the player .. ) about why the sky should show the route, is not that usual: the stars are not what the captain had seen many times before; in Ellery Queen novel there was the rain that saved the house from the fire, that throughout the novel had been the background increasingly present of the drama of the villa. In both cases, the characters of the plays are saved, but in both cases, the killers commit suicide.

It is not clear who might be the murderer or murderess (is the magnitude of the writer), until a few lines from the end, because Rufus King, hides and conceals clues to his liking, generating tension, modifying it and literally grow through various interventions :for example when he pointed to one of the characters as Dumarque, unusually for his height, wears  high heels. Rufus King heinsinuates doubts. The chapters are intentionally very short so as to break the speech several times, are deliberately  presented false suspects, but why?  The murderer is a great actor, has a strong will, generated hatred resentment and greed. And then the ending will be tragic.

It presents the objects stolen, some of which we see that fall within one of the assassins, but others do not: what is it for? They are used to generate tension.

Before the murderer is a man, then you know that woman, then that could be a woman disguised as a man, then another.  Slender male hands, hands and torsos hairy manly, heterosexual and gay friends, men face feminine, masculine women from hard expressions, men who use high heels, like women: you could say that this novel is a classic of ambiguity.

In some ways, the isolated ship at sea, on which two murders are perpetrated (the second one with the needle, dials a novel  by Ellery Queen with Drury Lane: in that novel the needle is dipped in curare whereas here it is forcibly inserted into the neck and broken in), prefigures a kind of enlarged locked room, and the elements that sweep the sea, though accelerating voltage, also serve to isolate the action on board the ship, and to prevent the murderer along with others, of course, could save themselves.
And the presence of different latitudes, each call to a different chapter, means that the ship while moving, may be localized on the sea only by means of the calculation of the latitude and not through other means, for which it is properly isolated in the middle of the sea. And from there you can not escape. The use of various latitudes, also serves to focus the reader's attention even more on the events aboard the ship.

For the rest ... a masterpiece.