An alternative analysis of the novel
(Spoiler..but not too much)

In 1933, two Queen wrote the novel “The Siamese Twin Mystery”, which prevailed in their production for several reasons, as one of the best novels ever of their first creative period.
Its plot is complex: Ellery and his father, returning from a vacation in Canada, are trapped by fire in a forest on one side of Arrow Mountain. Their only hope is to climb to the summit of the mountain. On the top there is the home of Dr. John Xavier, a prominent surgeon, and his strange family. But inside the house, Ellery known an atmosphere of suspicion: several rings were stolen from inside the house during the previous week; an unknown woman is hiding upstairs, and there is a monstrous creature that runs at night. The next morning Dr. Xavier is found dead from a gunshot in his office in front of him a card solitaire and torn half of a six of spades in his hand. The murder is followed by that of his brother, found holding a jack of diamonds in his hand. The climax is reached when the fire reaches the house and all take refuge in the cellar, and here takes place the last phase of the drama, with the discovery of murderer by Ellery, and the solution of the story.
As you can see, there's enough meat to put on the fire, though honestly, it should be recognized that the novel, despite being one of the best novels of the first creative period, however is less intricate and mastermind of “The Greek Coffin Mystery”, which instead is recognized by many and also from the same Nevins, such as the  the investigating novel more complicated, more and better built and breaking brain that has been published in the United States during the Golden Age of detective novel. 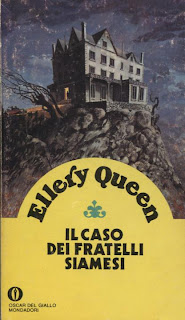 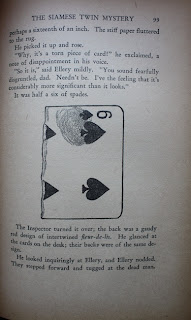 But Xavier who also reminds us of? We remember also the leader of the X-men, the telepath, Professor Charles Xavier. Stan Lee may have looked at Ellery Queen? We note curiously, as not only Xavier recurs in the saga of X-Men (X once again), but also its double: his half brother, the evil first and then redeemed "Phenomenon", which coincidentally is called Mark Cain. Strange, is not it? Moreover we can also say that the two Xavier (John and Charles) are very similar, such as John Xavier is concerned with the separation of Siamese twins, united brothers monstrously due to a dysfunction gene, Charles Xavier takes care of humans born mutants because of a particular gene: the gene X. And should we look for even more nitpicking, we might say that the 2 Siamese twins are no more than the mutants. So ..
In the sea of ​​the interesting things about this novel, I jumped to mind another thing I want to point out at the right hand of John Xavier was found a fragment of "Six of Spades."
Why clutching a fragment instead of a full playing card is already a thing that made me think and then it is not covered: an assumption that for me  would be spontaneous is that John Xavier had snatched the playing card and had shaken the fragment in his hand so as not to see within the holding something unusual that might have been a card, however, she, although crumpled, still would not have been visible, and he, a doctor, and  diabetic, would have to assume his immediate rigor mortis.
However there is another curious thing: in the novel there is a drawing of a six of spades split into two fragments: the first, in that tight fist is not wrinkled and represents two whole seeds and bits of two others, the other, the crumpled, two whole seeds and roots visible other half divided by two. Now, in the Tarot, the six of spades is a warning for a mistake that could be done but that does not last very long (the mistake of having first identified the culprit, then having wrongly acquitted him and finally having nailed him again?). But if we examine the two fragments, we are faced with a fragment that is worth two of spades and one that is worth four, and now the two of spades is a division (love or friendship), the four, a difficult decision that you are for taking: the difficult decision to separate the two Queen? However, in the first chapter of Part Two, "The six of spades," says Richard Queen, John Xavier used a playing card with which he was playing solitaire (the murderer when he was shot two bullets in the stomach: yet the symbolism of the two , almost as if when someone wants to intervene to separate the union of two, they themselves do not want to be separated): The six (of Spades) is between the seven of diamonds and the five of diamonds, remembers the Inspector Richard Queen. 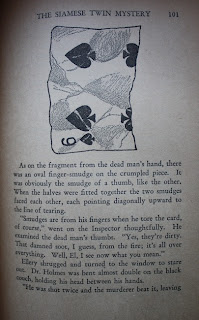 In Tarot, the five of diamonds means “atmosphere of friendship or business friendly”, while the seven of diamonds means “to make a decision on something that has not previously taken into account”. It seems clear reference to having to make a difficult decision of a division that has not ever wanted to take into consideration and that will lead to an atmosphere of friendship or friendly working: Once separated, the two cousins ​​worked on writing many more novels , dividing the tasks and avoiding nevertheless to be together. Arbitrary interpretation? And is just a coincidence that the Voodoo Queen of New Orleans was Madame Laveau, and Laveau as final ending sounds like Carreau, Queen of Diamonds?


But we must remember, the piece of card of playing John Xavier held tight in his fist is the one with only two seeds of spades: so .. division. The second piece of card of playing had been crumpled up and thrown away, what means "decision difficult it is to take"; in other words, the last word for the division (of the two cousins​​?) had already been taken. And the decision was held by the right hand while his left hand has nothing in his hand: that is, even assuming one could say that the right hand wanted the division, the left hand didn’t not. Right hand, left hand, which belong to the same person: other representation for two different entities (Dannay and Lee) that are part of a whole (the company town Ellery Queen)? This would lead us to the final question for the moment, in the absence of evidence of a biographical nature, remains unanswered: which of the two cousins ​​wanted the separation, and who didn’t want it ? We know that Dannay was pretty introvert and had trouble in the family while the other was his cousin. But you could imagine everything and its opposite, in the absence of objective biographical data.
Finally there is the meaning of something else, I turned in all its importance at the end of the book: the Six of Spades to know how to interpret well, could also be a way to identify the murderer. In fact, oddly, Ellery Queen stops to the value of the card of playing, the SIX, and to acrostic it indicates. In fact, Dr. Xavier before he die accuse SIX of having murdered. He stops and goes no further than this. Strange. Very strange. And I suppose that Dannay originally had thought Ellery to disclose to the other, but then he didn’t. What? Why SIX of spades and not diamonds or flowers or hearts? The shape? The meaning of Spades = Death? To me there's more. It has connected with the French terminology, already used in the Carreau = Diamonds. In French, SPADES is said PIQUE. Now, what is the strange disease which has affected the murderer, and you will see that underlies the whole novel? Kleptomania. In other words, there is someone who steals during the novel objects: rings, but also of insignificant value. And what animal is commonly designated as a thief? The Magpie, which is commonly appealed Thieving: Thieving Magpie. And what is the scientific name of Magpie? PICA PICA. PIQUE-PICA: interesting, right? But also more interesting is that term “PIQUER” in French can mean “TO STEAL”. So, accusing the card of spades, you wanted to accuse someone who had stolen.One thing that certainly also Dannay besides me must have thought at the time, because the reference is not random but it seems too direct. And why do not recalls Ellery Queen at the end? Perhaps for not repeating the fact that he was distracted by other things during your adventure? Ellery often end up doing the wise guy in his early novels, which tend to argue and quibble too much, to take the crabs and then eventually be forced to turn back: it does not happen only here but elsewhere. Or may be it's the sign of a previous draft  not used at all? I do not know.                                                                                                                                                                          Pietro De Palma