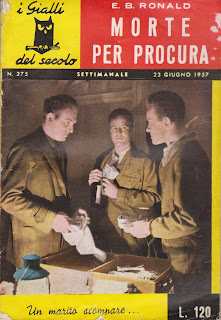 When we are talking about hardboiled, we talk about America. But ... have you ever heard English Hardboiled? It makes no sense, given the image of England given us by many Mystery authors. And yet ...
A novel, I would say one of the few novels that have interpreted and applied the atmosphere of American cities to those Londoners, it is what I present here today: Death by Proxy, by E.B. Ronald. A totally unknown name to most people, but so was the undersigned.
A first indication on the alias (if they are not news, it must be for strength pseudonym), I found it in A Dictionary of Literary Pseudonyms in the English  Language of T.J. Carty: E.B.Ronald (Death by Proxy, Cat and Fiddle Murders), was the pseudonym with which signed some of  his novels Ronald Ernest Barker, British publisher, novelist, who was born in 1920 and died in 1976.
And other fundamental news were taken from the American blog of my friend John Norris. In fact, only in the folds or in the appendix to the novels in their original language, you can find biographical information, not mentioned elsewhere .
Reviewing another novel by the same author, he was described as a Scottish man who lived in England. At the time of publication of the only mystery which he wrote, he was the head of the Association of British publishers. Under the pseudonym E.B. Ronald, signed some hardboiled novels of atmospheres, transferring the American cliché to British ones, including precisely Death by Proxy.
Other details can be found elsewhere. For example that in the mid-50s, he wrote a book about the industry of book, commissioned by UNESCO: A Study of International Book Trade. Others on the publication "Who Was Who". 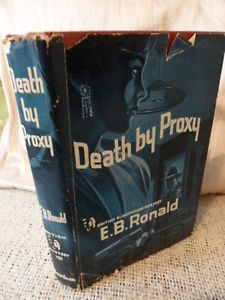 Rupert Bradley, a London detective, is contacted by Veronica Hedley, to track down her husband Philip, missing for a few days. She didn’t call the police because she suspected that the absence may be due not to  clean grounds, since her husband recently brought to home large sums of money, incompatible with his professional duties like commercial adviser. Veronica is the sister of William Carmichael, industrial of cordage who has his  warehouses at the port on the Thames.  His offices occupy the first floor of the building where he has his studio Philip. The only that might be able to know something more, is Miss White, the private secretary of Philip, which is not his lover, but she is just a secretary, who ignores what happened to his principal. However, Rupert does not give up and therefore asked the office key toVeronica Hadley, at night, he enters the offices to try proofs, only to find in a room, tied to a chair, a man, shot in the neck, thing that has deformed his facial features, and with the tips of his fingers burned by the flame of a candle (tortured?).
The wife, who had previously withdrawn the job to Rupert saying that her husband had put in contact with her (but the detective thought he was lying), recognizes her husband into the morgue.
From here begins the tightened investigation by Rupert, who relying on the friendship of Marshall, an Inspector of Police, is unable to carry out an investigation in contact with the police, which will take him first to know those whose names had been found among the notes  of Philip (people who feared for external things to their business relationships, or only knew him professionally), then Peggy Hedley, the beautiful sister of Philip who falls in love with him (reciprocated ... a bit), then he transits through the Belvedere Arms, night clubs, where a waiter "John" will direct him, through a false telephone box, which has a secret door in her background that pops open, a wing of the building, destined to the brothel, and where there are rooms in which microphones and cameras, filming the revelations and intimate attitudes of wealthy clients who are then blackmailed. On the third floor of the building, will access to a bedroom with women's and men clothings, which will identify in that of Carmichael, industrial-law of Philip and brother of Veronica. The double life of Carmichael: industrial cordage and owner of a brothel , where probably they  smoke hashish and cannabis, of which Rupert has felt the smell going up in the brothel.
Investigating about the life of Carmichael, even going at his home and interrogating his wife Carole, he will come to the warehouse, discovering a cannabis trafficking and being saved from certain death by an insurance agent, such Radcliffe, which operates on the basis of a policy life turned on a short time of the disappearance and death of Philip. However Rupert thinks that Philip is not dead, and will witness it the body fished out in the river, this time really by Philip. In a frantic finale in which the pretended architect of everything will die apparently committing suicide, but actually forced to kill himself from the real killer, having substituted a harmless pill for gastritis with one containing cyanide, will prefer to kill himself not before it was revealed the true identity of the corpse without name.
A strange hardboiled, which mixes consolidated cliché (penniless detective, tough but sensitive to women, involved in fist fights and beatings, a diet only of Whisky and fried eggs and potatoes, frequenting sordid environments) to some less (setting in streets notes the London center, brothels with acquaintances in high places, hashish international traffic based on contacts inherited by British soldiers stationed in North Africa), in a set not at all obvious, that maybe sometimes makes us smile, but by no means boring.
If the rhythm is smooth, the dialogues give us a detective, who despite consolidated borrowing clichés from areas already historicized, by brand Hammettian and Chandlerian provenance (in Death by Proxy, there are traffic in drugs and blackmail by complacent prostitutes, and in Chandler’s novels there are blackmails, traffics, prostitutes and brothels), speaks like an English man and not like the classical Philip Marlowe, despite
Rupert hastens to declare a few times that he lived in America and a some American accent of Alabama has remained, as a false Yankee connotation that he uses for his investigations.
The final is not at all obvious and indeed gives us an evil murderess, with no inhibitions, totally amoral, which recalled to me another novel by Chandler, Farewell, My Lovely, even for the end that makes the murderess. This type of murderer, is very present in Chandler's novels: just you  read over that Farewell, My Lovely, even The Lady in the Lake and The Long Good-bye to figure out what I want to say.

Email ThisBlogThis!Share to TwitterShare to FacebookShare to Pinterest
Labels: E.B.Ronald