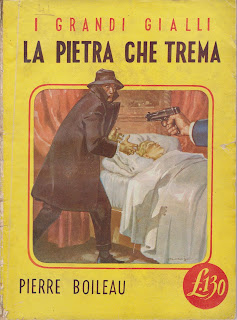 La Pierre qui tremble (The Stone Trembling) is the first of Boileau novels: it is a novel that narratively speaking is closer to 20s than 30s. Begins with André Brunel (the character that will animate all or almost all of Boileau novels) which appears here for the first time, that in the train that is taking him on holiday, he realizesthat a suspect is opening one after the other, the compartments wagon where he is, to look inside. Watching him and watching him discreetly but closely enough
Brunel understands that the attacker came from Brest, having collected the ticket he had fallen in the struggle: that is, he had organized things to leave from Rennes and return to Brest after having possibly killed the girl. He droops because that's where he is on holiday, the sea, the attacker started to kill the girl. Who knows if it will succeed again in his attempt .. For that, Brunel promises as soon as possible, after having rested a few days, to reach the young girl to the castle. When it will happen, he will be in time to foil another attempt to murder the girl, this time perpetrated in the woods that surrounding the castle.
At this point, he promises to her and her boyfriend to settle at the castle until she will bemarried to Jacques: even knows Dr. Nicol, the doctor of the Count, and the Count same Kervarech, Jacques guardian.
The mysteries do not cease: while Denise, Jacques, Count and Brunel are in the lounge where Denise is playing the piano, Brunel seeing toward the door, the first light through the keyhole of the door and then darkness, someone realizes that, at the beyond the half-open door, he turned off the light and it is there lurking: do you understand that they must act. He gives instructions to others present there and then with a leap opens the door in time to see a shadow that flees at the first floor of the new castle. Having no other way out, locks himself in the bathroom. The bathroom has two entrances: one in the hallway and one in Jacques' room. But while both of overseeing and two outputs, and according to the count outside armed (who shot when the fugitive appeared at the window), the intruder, after opening the bath taps, flees. From where? Through the gutter?  When they barge into the room, they do not find anyone. And the other exit is still closed inside. The Count is always there in the garden, he shot the first time and scrutinizes the windows, so when they tell him that the fugitive is gone, he does not believe his ears. Brunel can not understand how it could escape. But it is not the only thing I can not understand.
Denise then Brunel tells how a few nights ago, finding sleep and remembering the bad experience lived by train, she had wanted to breathe a bit the air of the night, and in the park she had found Jacques dressed all who moved stealthily and from him she has known about a threatening secret of which he could not to warn the girlfriend.
Brunel wants to understand what  Jacques was doing in the park at that time and therefore he decides to watch him at night, discovering that at night goes away in the direction of the old tower, the only remnant of the ancient castle, which accompanies the new building where the family lives. Managed to climb himself, he witnesses a strange scene: Jacques in the tower met with the Count and there repeats a series of phrases, absolutely identical to those he utters his interlocutor. Then everything is resolved with a big laugh and a final toast.
Brunel is increasingly astonished: he does not understand anything of what is happening around him. 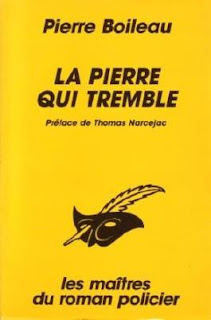 Things at this point tangle: a home disappears, the valet Jacques, Yvon. And Annette, his girlfriend, another maid, to raise the alarm. They find him lying in serious condition, on the cliffs, stabbed. Yvon is dying, but nevertheless sets the castle and at one point her let us and shrinks in terror: he saw Jacques standing at the window: he fears that he might kill him. A flash and Brunel, fearing the worst, rushes towards the house: Jacques is no longer there. There are no other exits than that through which Brunel is going up on the first floor, and yet no sign of Jacques. Since in his room there and the bathroom door was locked this time on the side of the room, he decides to go in the hallway that leads to the other bathroom door, but even here there is Jacques. Go back to not understanding where it can be released. Find then down, poor Jacques with the skull shattered by a blow but still alive. However he does not understand how he can be got there, he had come on to the house in less than no time and certainly had not seen leaving the young, nor her attacker from where he had entered.