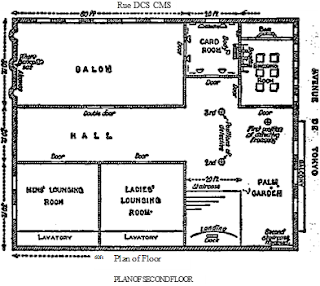 Many people have already tried their hand at the tantalizing game of elaborating a list of Locked Rooms, the best ones according to their taste and knowledge, and from the comparison between the various lists, some firm points emerge that it will be worth considering.

John Dickson Carr is humanly considered the greatest and unsurpassed Master of Locked Rooms, the one who sounded out the genre by inventing novels with the most absurd and electrifying situations. So, come on, anyone who wants to draw up a list of Locked Rooms, cannot fail to confront Carr. Especially since he was not only a specialist, but a great novelist, with a great narrative technique, and with breathtaking descriptions and atmospheres, which, due to their density, lent themselves well to being dramatized on the radio. So a great writer, who can give you serious headaches.

For what reason? For one above all: if the list will include Carr, of course it will have to be copious, far exceeding the number 50; if, on the other hand, one wanted to prepare an essential one, in my opinion one would have to exclude a priori Carr, who is a separate case. In fact, creating a list, in which to insert one or two of Carr's novels would not only be an understatement but also unfair, because each great Locked Room of him is a speech in itself, which deserves to be remembered. Moreover, it has happened that in the case of a very famous list, that of Lacourbe, for a sort of national chauvinism or national pride that we want to define it in this way, six seven novels by Carr have been contrasted with six seven by Halter.

Now here, we touch on a controversial point, because Paul Halter is the greatest writer of Locked Rooms, after Carr and Hoch (the greatest in the genre of short stories), and therefore lends himself well to being remembered and perhaps compared. This touches me even more, because in the past I made an interview with Paul, whose friendship I enjoy, and therefore I find it somewhat problematic to talk about it: But since I have already experienced the discourse elsewhere, and I have discussed it with him ( in French, of course), I don't see why I shouldn't repeat it here: for me the greatest is Carr, without a shadow of a doubt, and he is unsurpassed for one very simple aspect, namely the fact that he was a well-rounded writer, the whose novels had not only very complicated problems, but also great atmospheres and great killers, that is, the psychological nature of the perpetrator was very well analyzed. In Paul's novels, on the other hand, if virtuosity in itself reaches absolutely unusual peaks, perhaps even higher than Carr, it loses a lot in the characterization of the characters, because very often his characters are either psychically ill or are women or boys, there are no that is, well-curated characterizations of murderers except in exceptional cases, even if the atmospheres are also well developed. It is a bit the same thing that could be said, obviously in smaller areas, for Clayton Rawson, a writer who, as an illusionist he was, has created some extraordinary examples of Locked Rooms, including the absolute best brain breaker in my opinion. together with The Hollow Man , that is Death from the Top Hat: in fact, even though he is a master of insoluble problems, he is lacking in something: in his case in atmospheres, which are rather cold.Lacourbe, on the other hand, in his list of 99 Chambers (which are actually more) places the two in a sort of confrontation, limiting the consideration of the others in some way. In his case, then, there is an exorbitant presence of French classics, to the detriment of the Anglo-Saxon ones, and the almost absence of Chambers elaborated by writers of other nationalities: for example. there is nothing of Italian.

This is also another controversial point: in fact in a list that respects itself, and as impartial as possible, both French and Anglo-Saxon literature should be present, because the French in the 1930s created some extraordinary examples that are however very little considered in the Anglo-Saxon world due to the lack of translations, which John Pugmire is doing little by little, but an isolated case. And so if Hoch's list does not present even one, Lacourbe's list presents many, perhaps too many.

A further point should then be examined: is it right to draw up one that contains all the best rooms ever, or only the best ones translated into the language of the nation in which you live? Well, I would be inclined to indicate briefly one that is absolutely, and in which the novels are cited not on the basis of a ranking that would be inappropriate for the presence of Carr's novels compared to the less numerous other writers, novels of Carr who would inevitably end up with higher votes than others, but to a list of titles, all equally important.

A further reason for reasoning concerns what is meant by Locked Rooms: commonly, by Locked Rooms we sometimes also mean the so-called Impossible Crime. In fact, many authors consider the two terms to be essentially comparable. For me, on the other hand, these are two distinct things, due to the elements they contain: the crime that is impossible in itself, although it often takes the form of a sleight of hand or an illusion (see Lord of the Sorcerers for example, or The Emperor's Snuff-box), it is not a real Locked Room: in fact, for one to rightly speak of a Locked Room, it is necessary that there is not only a well-marked temporal element (which perhaps can exist alone in the Impossible Crime: eg. Tour de Force by Christianna Brand) but also space: I would say almost above all space. That is, it is necessary that there is a well-defined space, in which a murder or a disappearance of something took place, without the conditions for which someone could have gone out: therefore we will have a room closed by door and windows, with inaccessible chimneys. and without trap doors and secret doors; or a house surrounded by intact snow, or a crime that took place on a beach with sand without footprints around it. Or it must have happened outside in front of the eyes of those present without anyone having seen the killer (The Black Spectacles). Or it even happened in the rain, without there being wet footprints (in a novel by De Angelis).

Following Lacourbe's false line, which mind you I deeply respect, perhaps even for having published all of Carr's radio plays in French, I could draw up my own list in which to include Italian novels as well; however, like Lacourbe's list, mine too would end up being chauvinistic, as it would end up that an Italian list, with even Italian novels, would end up excluding novels of other nationalities, perhaps more deserving.

So in the end, not drawing up a list of 100 novels, like Lacourbe, but trying to remedy his moles and aiming to be as super partes as possible, I will draw up my essential and essential list of 25 (+ 1) novels, only with Locked Rooms, and not with Crimes Impossible, in which I will go against many common thoughts, including an Italian novel (translated into English by Igor Longo, and published by Locked Rooms International)

Considering the Master to be a unique and unrepeatable case, I will put his novels in the head, and then to follow, distinguished according to the alphabetical order, those of other novelists

I know that every reader who will read this list will have to object and present their own inclusions while excluding some novels I have included. However, I tried to be as impartial as possible, and nevertheless I have to justify some sensational exclusions:

Derek SMITH : Whistle Up The Devil

Edgar WALLACE: The Clue of the New Pin

Alan GREEN: What a Body!

Peter SHAFFER : The Woman in the Wardrobe

Anthony WYNNE: The Case of the Gold Coins

J.J. CONNINGTON : In Whose Dim Shadow

Rim of the Pit by TALBOT: as I wrote in an article of mine several years ago (taken up and made his own in one of his theses by an Italian scholar, without citing me), although the novel is beautiful, it has a very big flaw: that of inserting apparently impossible things, explaining them not in an exhaustive way and often climbing on mirrors (as Halter sometimes does); for the rest I refer to my article: http://deathcanread.blogspot.com/2017/06/hake-talbot-rim-of-pit-1944.html

The Chinese Orange Mystery by Ellery Queen: it is not a Locked Room, as it would seem, but an impossible crime: the reason is that the chamber is not closed, but open.

Invisible Green by John Sladek, I personally did not like it, because the solution is too far-fetched even if it is magnificent: the best solutions are those that seem crazy and then come down to nothing or almost nothing and that can be simply replicated. I liked Black Aura by Sladek, even if the solution is too complex there. And above all, a masterpiece is the short story By an Unknown Hand.

Tom inserts Mr Splitfoot, by Helen McCloy probably for the sound effect, not knowing that, however, the same was invented in exactly the same way (and therefore I would speak of derivation) by Charles Ashton (I wrote it in the related article). In the same way I do not insert a novel that I liked very much like The Gilded Fly by Edmund Crispin, because the solution derives (I don't know whether deliberately or not) from the novel I have quoted by Gensoul & Grenier.

The Tokyo Zodiac Murders by Soji Shimada, is not mentioned, because despite being one of the most beautiful novels I have ever read, for the delusional fantasy, its locked room is nothing special, referring to the one invented by other authors.

One final reflection. I was undecided whether to include among Italian locked room writers, the Vailati novel or De Angelis novel: De Angelis's is much more novel than Vailati's, which focuses only on the Locked Room, but while in “L’ Albergo delle Tre Rose” (The Hotel of the Three Roses) the Locked Room, despite being there, it is only one of the three crimes, and is not even mentioned as such by De Angelis obviously not interested in the impossible crime in itself, in other case (The Flying Boat Mystery) the whole novel is based on the crime and the solution is phantasmagoric, a sleight of hand.