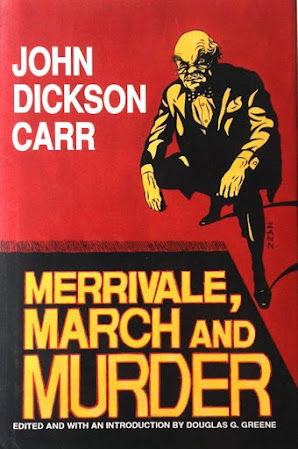 The Diamond Pentacle is among Carr's best short stories ever.

It dates back to 1939, a period characterized by intense production, both for novels (The Problem of the Wire Cage and The Black Spectacles, with Doctor Fell, The Reader is Warned with Merrivale and Drop to His Death, written together with John Rhode, without a fixed character), and short stories (New murders for old, Strictly diplomatic, Harem Scarem).

It was published under the pseudonym Carter Dickson, in the Times on November 15, 1939. It was later included in the March Merrivale and Murder collection, which, edited by Douglas G. Green - dates back to 1991 - costs $ 193 .. used. I had the opportunity to read the story thanks first to Doug, but the scan in some parts was unreadable, and then thanks to Arthur Vidro.

The story is not about a murder or an injury, but in any case something absolutely impossible if not explained with the common reasoning: that is, how someone can enter a locked room from the inside, leave tangible evidence that he has entered, and leave it.

In essence, the plot is summed up in this: Dick Mason and Sheila Lake spend a week together in Broadlawns, the Bart Lake estate. They have known each other for about a month and they fell in love. She doesn't know exactly what he does. On more than one occasion he has shown interest in his speeches, especially recently, for the jewels that are stored in the wall safe in Sheila's room and in particular the Pentacle of Diamonds, donated by Uncle Bart to Aunt Martha. Even if the girl believes that the young man's worries about a possible theft are absolutely useless, because the safe is of the latest type, and what's more she always locks it from behind, and in the house besides her and Dick, there is Major and Mrs. Prentice, however the skirmishes go on. Dick is not fully convinced of the goodness of Aunt Martha's invitation, who has never been able to see him, despite the fact that Uncle Bart immediately sympathized with him. Sheila begins to have some suspicions towards Dick, who at some point bets with her that if he will prove to her that he can get into her bedroom during the night, even though she locks herself from the inside, she will take the steps to transfer. the jewelry in a safer place. The fact is that what the young man predicted happens promptly. The next day, another complication also happens: Agnes Prentice tells her husband (they are friends of Uncle Bart and Aunt Martha) of how she discovered that Bart has hired high-ranking detectives to find out who Dick actually is. So when the hosts return from Scotland and Major Prentice picks them up at the station, he reports the situation to the landlord and then they decide to confront the young man and the girl who doesn't answer the calls. When they enter the young woman's bedroom, they find her in a negligee while the clothes of him, are still wet. Cornered, Dick will tell another story, which concerns the subtraction of the Pentacle, yes, but not done by him, and in his defense he will tell the facts as they went, he will demonstrate them and so with a certain happy ending, (his and girl) ends the story. It is not known how Uncle Bart and Aunt Marta behaved.

I kept quiet about so many things.

First of all, Carr's story, twenty pages, is delightful.

There is Carr's usual way, old romantic, when he has to talk about the relationship of an engaged couple: there are skirmishes, the young man and the young woman have met and have been flirting for a month already, and he already wants to put things together. clear about the possibility of keeping the girl (after less than a month!). There is the embarrassing situation when they discover them in the girl's bedroom, locked from the inside, with her in a negligee that lets you see something and he is not at all embarrassed even if with damp clothes on, as if at night he had gone out without an umbrella .

Carr, with his usual style, succeeds from the very first pages, with Dick's allusions to a possible theft, with his allusions to the famous escapologist Mephisto, with his repeated request to transfer the Pentacle from the very secure safe to another hiding place, to instill doubt in Sheila (and the reader) that Dick is a jewelry thief. Except then, with one of his usual pirouettes, to overturn everything, providing the explanation of his fears about the Pentacle and why he did not want him to continue to stay in Sheila's room, to want to protect her. From what I am not saying, because then I would take away the pleasure of the average reader to find out.

Obviously, the Pentacle of diamonds in the safe is not there. Dick has it, but he's not a thief.

Let's leave out the rest, to make some notes on the story itself.

In that 1939, in the context of the four written stories, this is the most detective one, in the strict sense: Harem Scarem is an adventurous tale, Strictly Diplomatic has a plot that pertains to espionage, and New murders for old is finally a tale of the supernatural . Strictly Diplomatic would also have an impossible situation, but between it and The Diamond Pentacle, the pearl is the latter in my opinion: first of all for how it bases the story to explain the lack of the Pentacle from the super-safe safe; why Aunt Martha, while not digesting the young man, invited him in the absence of her and her husband to their house; and how Dick explains after explaining everything else, that gem about how he managed to break into a door hermetically closed from the inside, entering the room and then leaving, closing it behind him.

The solution is absolutely extraordinary, but in a certain sense it loses its boom effect if the reader has already read all of Carr's novels: I say this because, as happened other times in Carr, the solutions and plots of some stories become the basis for the creation of novels. And here too, the solution of the locked room of The Diamond Pentacle will be found years later in the explanation of the third impossible suicide in The Case of the Constant Suicides, as it is: not only in the explanation, but also in the object with which here Dick, the murderer there, will have made possible the impossible closure of a room from the inside. Here, if we want, the impossibility is double, because in addition to having closed the door behind him, Dick first opened it. Since the trick to close the door is the same, carried out with the same tools, Carr systematically excluded the story from his anthologies.

In my opinion there would also be another gem: when Dick Mason justifies himself in front of Bartholomew Lake and Major Prentice, telling his truth which is almost the opposite of what he was charged up to that moment, he exclaims: I've made a remarkable ass of myself, ”he said. "I’ve been the world’s most whacking fool; but now, by thunder and Long John Silver, there are limits! "(page 14). When he swears in recalling Long John Silver, it may have been because he points out a person's ambiguous conduct. Long John Silver, I remember, is the pirate with the wooden leg and the parrot perched on his shoulder, from Treasure Island, by Stevenson.

Ultimately, whoever manages to find the story, and has the novel to read, will have to decide which one to read first.

But not reading this story, it's a real… crime!