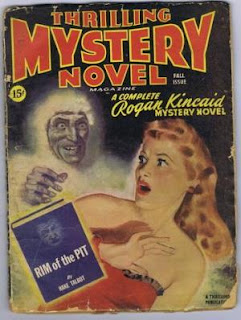 Henning Nelms was born in Baltimore in 1900. He taught dramatic Literature at Middlebury College and Pennsylvania State University, and conducted several theaters. He did several jobs, including the profession of lawyer, a family profession, since his father had also been (as a shepherd of the Episcopal Church); But he had also done the sailor, the editor, the accountant, the director of an advertising agency, the prestigious. With his true name he signed books about theater, drawing, and a handbook of illusion and prestige.
Similar to Clayton Rawson, he wanted to try to write mystery novels in which he transfigured his illusionist knowledge, and with the pseudonym Hake Talbot he signed two great classics of the mystery: The Hangman's Handyman (1942) and Rim of the Pit (1944); as well as two short stories: The Other Side (1940) and The High House (1948).
Rim of the Pit has always enjoyed a certain fame: it has been (and still it is today) praised or attacked. Talbot wrote a novel that had to astonish: it is understood from the beginning:

"I came up here to make a dead man change his mind."

In short, a bumpy entry!


It begins with that "I came up here to make a dead man change his mind", that expresses already a lot and already introduces one of the subjects of the work, the windigo, the evil spirit. In fact, in the phrase  “I came up here to make a dead man change his mind” (expression recalled by Carr in his famous phrase, which he formulated when Talbot's novel came out in the types of Bentam: “From the first period: I came here to induce a A dead ghost comes back ... or maybe he does not come back at all. A flying ghost drops apparently as he hits and goes to the attack. No angels, but demons and sorcerers seem to be dead. Dancing on the tip of this needle ... The edge of the abyss is a magnificence “), the adverb "up" can be understood with reference to two things: referring to the place of the spiritual sitting, that is a cabin in the mountains , And / or referred to a place anyway higher than that in which it resides.  Grimaud Désanat, if it is an evil spirit, he will dwell in hell. Moreover, his evil indole is also witnessed by the name Talbot furiously gives him: in fact, in Grimaud Désanat, the beginning of the word Grimaud, "Grim", is the same as Grimorium (black magic book), and moreover the adjective "Grim" in English may mean "horrible", "left", "hateful", "fierce", "macabre"; while Désanat can be understood as a sciarada, formed by the union of two words: De and Sanat, then Satan's anagram, Satan. So .. "Grimaud of Satan or Grimaud from Satan". But ... Grimaud is not quite a Talbotian name, but invented by Carr: it is the surname of that Charles that appears in Carr's Hollow Man. Another connection with the great John?
Rogan Kincaid is a gambler with a lively and adventurous life behind him, who suddenly, when needed, is a detective. Landlord of vast mountains, covered with trees, Grimaud Désanat is dead. Luke Latham, a wealthy sawmill owner, would like to convince Grimaud's widow to sell the forests, but she is reluctant to do so, interpreting the will of her husband who has left them. But Latham does not deny and obsessively tries the widow, as long as she agrees to initiate a spiritual session, in which she will play the part of the medium, having specific powers. Some people will be attending the session, including Rogan, Latham, Ogden, Latham's partner, and a Czechoslovakian magician, Svetozar Vok, who should unveil the tricks of the medium. 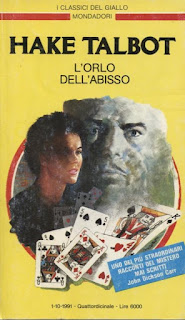 The spiritual session begins, and at some point the voice of the medium changes, taking a different pitch from her and assuming a male timbre; then immediately after, happens the apparition of a malignant face suspended in the middle of the air, so malignant to horror the present:  is Grimaud Désanat, who curses his wife for changing his wills.
Immediately afterwards, in the horror of the onlookers, the spectrum vanishes seeking refuge at the top floor. Meanwhile, the widow-medium faints and if anyone had some pretense or a supposition that it was a trick, he must recur as there is no trace on fresh snow that can prove the existence that someone not known else has arrived in the meantime, not seen, in the cabin. Meanwhile, however, Vok reveals some of the tricks practiced by charlatans and fake mediums.
At this point, the impossible happens: the medium is killed in her room by the windigo, the evil spirit in which Désanat has turned, and no trace is found on the snow covering the window sill. Subsequently, there will be a second murder, this time outside, without any traces found, and Ogden, Letham's partner, will die. In the end Rogan Kincaid will solve the arcane, demonstrating the murder was not supernatural but human.
In America, the novel was originally published in paperback on the Pulp Magazine "Thrilling Mystery Novel" in the 40s, then in the Bantam Paperbacks in 1965 (as part of "The World's Great Novels of Detection" series chosen by Anthony Boucher), and in the 80's, always in paperback, by International Polygonics, Ltd. In recent times, also republished by Ramble House. 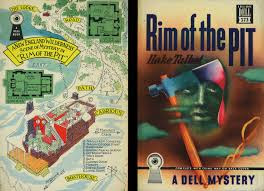 Certainly a lot of the fame, derived from the enthusiastic judgment expressed by Carr:
“From the very first sentence, I came up here to make a dead man change his mind, we are into the realm of nightmare: Miracles gather and explode. A dead man returns – or does not return. A flying ghost, apparently, swoops down and attacks. No angels, but goblins and wizards seem to dance on the point of this needle. But gently: have patience! Everything is explained on natural grounds, un a marvel of ingenuity; and all the clues are there…Rim of the Pit is a beauty. Don’t argue with it; read it”
Now, that Carr was convinced about the absolute goodness of the work, and with him those who embraced his argument, it is not in question; It may be to see if in fact the novel merited  entirely the fame  .
I’m somewhat disappointed (I think it was understood) maybe because I had been excited by Talbot's other novel, written before this. Of course I'm aware that I'm so against all the series of enthusiastic judgments that you can read here and there, but I do not care to be an out of line opinion. So ..

First of all, nothing can be said about the aspirations of this novel: it tries the difficult way of the nystery novel that goes hand in hand with the supernatural one, as J.D.Carr had already done with superb results in The Burning Court and Melville Davisson Post in several stories. In fact, in the intentions of Talbot, until the last, one should not be understood whether the crimes were committed by supernatural beings or in flesh and bone; and even this is widespread everywhere in all websites.
I must say, in truth, that all that concerns illusionistic magic (phantom appearance, tricks, and anything else) is treated with mastery, and some peregrine thinking if and how the ghost may have appeared, peeps, I admit . And how the crime could have happened, given the restrictions imposed, typical of novels like this (intact snow, absence of footprints, etc.). So nothing to say about that.
I disagree about the axiom for which the Talbot novel was written by taking as an example Carr. It does not seem to me that Rim of the Pit can only remember Carr: at the same level of novelists, it seems to me that much more of Talbot's carriageway, for example Alan Green. In spite of some aspects that actually exist in the novel, Hake Talbot seems to me much closer to Clayton Rawson, as more than anything else tries to focus on the quality of the enigma: a novel I would ideally associate with this could be No Coffin for the Corpse by Clayton Rawson, in which there is an impossible disappearance and an equally emblematic appearance. And as I say this, it would seem to me that another novel that could have been taken, for example, could have been the Winslow & Quirk Into Thin Air, reviewed in this space some years  ago.

The fact is that it seems to me (where instead others don’t think this ...) that this novel has an inadequate atmosphere: it is frosty, claustrophobic yes certainly like the environment in which it is placed (and some American critics rightly refer to The Plague Court Murders by Carter Dickson (also the one reviewed here), but it can not captivate in the manner we would think; this judgment I have compared to that of other friends who read it, and many among them think the same thing : it's also a matter of style. In addition, and this in my opinion is a further limitation, if not even a wrong choice, Talbot inserted at the beginning of each chapter a quotation from magic books, treats, or anything else: this escamotage ends up removing any residue of supposed supernatural truth, since the continuous recurrence of something related to the atmosphere that one would like to create ends up to make sure that of supernatural there is nothing (the reader who buys the novel knows it is a human crime, but at least during the novel he would like to be carried on the wings of fantasy elsewhere; instead ..).
In addition, when Rogan Kincaid unmasks the assassin saying that the gun that had shot blancks to Windigo, and the silver bullet that had been found in Ogden's deadly wound, had been Kinkaid to put it in the wound when he Had pretended to extract it, and that Ogden had not been killed by a bullet but by a stab and accuses X of having killed him, he doesn’t believe as Carr, to provide a clear and acceptable explanation of the crimes, that instead remains cumbersome and unresolved, to testify that not always, climbing on the mirrors, you can then climb them. In short what in a much more specialized environment than mine, others say: "The actual impossible murders (there are two) are well set up but less convincingly resolved, though they're certainly original. In my opinion it's very good, but not great."


In this he differs even from Rawson, who, as is well-known, has never been too much praised for the style of writing or for the atmosphere, but essentially for the quality of the puzzles he was able to create, being able to explain them In the best possible way, despite some of them, for example Death from a Top Hat are remembered like some of the most complicated puzzles ever conceived, often very close to pure illusionism. Then, if someone looks  for other things, like locked rooms, and the same mechanisms used by Carr to mislead the reader (in The Hollow Man), here he is going to observe them. Only the judgment expressed by so many critics and novelists, that is, in their list of the best Locked Rooms overall, this novel by Talbot was the second after The Hollow Man by Carr , it seems to me a bit unbalanced (and heavily influenced, from the positive opinion, expressed by Carr).