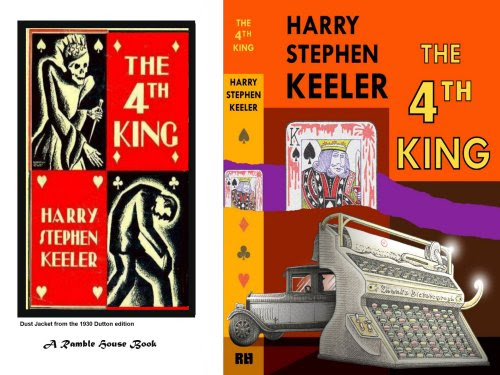 The Fourth King, is the answer to an intriguing plot. The story takes place in Chicago in 1929, but it is not, as the place and time might make it seem, a story of gangsters, in short, hardboiled. No. It is a story with a classic plot, very ... I would say.

A long article is published in a Chicago financial weekly, accompanied by photographs of thirteen kings of finance. After a short time, three of them receive a deck of French cards each marked, from which kings are missing: from the first one is missing, from the second two, from the third three. The missing kings are directly related to the deaths of those to whom the deck was sent: one died poisoned, another by drowning, the third by accident. Nothing suggests, however, that the origin of death could be other. One fine day a letter arrives, accompanied by a pack of French cards marked, like those sent to the other three, to a wealthy Chicago industrialist, J. Hamilton Eaves, who, however, had not been indicated in the 13. The industrialist, of the National Industrial Insurance Company, is advocating the sale of a new device, called a "dictatograph", a complex tape machine, a kind of telegraph, which allows the dictation of something, for example a business letter, to be poured onto tape, making it more ' quick and easy paperwork, and eliminating the presence of a stenographer. He acquired the rights to sell the invention from a certain Shanks, who died, leaving heir to a sick brother, unable to compete with the cunning of the industrialist. In reality, contrary to what Shanks thinks, the invention is a bluff, a red herring, and this is what Eaves and his employee, the technical designer Fowell, are convinced of, who is also involved in demonstrations of the machinery. and who knows its material limits, and who in turn is the inventor of a certain type of phonograph record, destined to make a fortune later on, but still of an unknown purpose.

Eaves, increasingly worried as he has received a threatening letter, calls Fowell and proposes a singular plan to overcome the one who threatens him with death: he asks his employee to take his place and go to his house, while he, Eaves, will wait for the blackmailer in his office, determined to expose him. At stake, for which Fowell accepts, is the return of a certain signed statement in which Fowell accuses himself of the theft of $ 5,100 in stocks and shares, contained in a sealed envelope, which disappeared from the double combination safe. Eaves that only he, the secretary and Eaves himself know. Eaves could not have been because the theft made it impossible for him to complete a project that would have earned him well over  $5,000, and therefore, thinks Fowell, who knows he was not, could only have been the secretary he is in love, whose mother was cheated by Eaves, and who therefore would well have had reason to take revenge. However, the plan does not go through as it should have done: in fact, while Fowell takes the place of his boss at his house and spends the night with Eaves' stepson. He, Eaves is killed. Just Fowell, who went to the office will find him the next morning, killed with a switchblade. A detail that will have its importance is that the box of mints that Fowell had left is almost completely finished and smells like mint not from the telephone receiver located in the Eaves office that can receive but not telephone, but another device.

Fowell knows that Eaves has locked his self-guilt plea in the safe, the combination of which was changed by Eaves after the theft, and therefore is virtually inaccessible unless they break into the safe. What a surprise then, when it is found in the pockets of the deceased! And made public by the police. His status as a thief may, however, fail, because his beauty, whom he got in trouble for, knows everything, and therefore could testify to the police, that one day she had seen, in Eaves' room, after the lunch break. , a fake telephone worker fumbling at the safe: he was a dangerous burglar and thief, who had made other similar strokes. But this time too Fate seems to throw another trick at the poor employee: in fact, his beauty is found drowned. But when she has now lost all hope, her girlfriend materializes in front of her: instead of her she is dead, indeed, it seems she was murdered, her friend of hers, engaged in turn to Eaves' stepson, Pettibon .

Pettibon also tries to lure Fowell: in exchange for the destruction of the famous letter, and the withdrawal of the theft charge, Fowell will have to try to convince Shanks about the paucity of the invention in order to grant him its definitive use, in exchange for a few pennies. But this has no effect, despite Fowell having tried in every possible way to convince the recalcitrant Shanks, and therefore Pettibon does not return the message. At this point Fowell decides to improvise himself as a detective, to get to the head of the matter and save himself: he goes to rummage through the documents in his boss's office and discovers a suspicious obligation and a letter to a non-existent Jeggs. The suspicious paper, headed to a chemical instrumentation company, will lead him to the trail of a former great Russian chemist transplanted to America. Hence another series of vicissitudes up to the end.

Excellent novel by Keeler, The Fourth King, shuns any schematic classification: for example, it does not belong, like many other novels of the time, to the false line of Vandinian novels, but pursues its own design, albeit very bizarre. If we want, the investigation is of the classic type, and the detective is not an esthete, or a bored rich man or a policeman or a scholar or a man of letters, but a person who improvises himself to escape an unjust accusation and to more to an unjust sentence. In a certain sense, it is very similar to certain novels by Mignon Eberhart, in which there is a damsel in danger who improvises herself as a detective or for whom someone takes action; here too there is the person in danger, but it is a man (Fowell) even if the woman in danger exists: only for a moment, because almost immediately the death of Avery is reversed in the death of Roslyn Van Etten, the friendly heiress by Avery. But why would the killer kill the woman? The solution can be found in the nature of the plot of Keeler's novels.

In fact, Keeler, born in 1890 as Agatha Christie, enjoyed a fair popularity in the 30s, but then with the war and post-conflict events, dying in the 60s in complete oblivion, from which he was redeemed following a series of articles by Francis Nevins Jr., the critic who would become most famous after the conquest of the Edgard for the publication of important essays on Ellery Queen.

The fact is that Keeler is the strangest writer who ever lived; and also the most surreal. His imagination was the most delusional that was possible: examples are his novels, in which horror, deformity, physical anomaly, dementia, coincidence, chance, are re-evaluated in detective literature, which inherited pour always the exactness of the Sherlockian mathematical deduction. In this, Keeler's approach is still a sort of revolution, a reaction to the established schemes. Probably the plots so absurdly conceived, with demented or freak elements and full of circus monstrosities, or imaginative solutions but to the highest degree, must have disconcerted the masses, accustomed to quite other novels. The fact is that Keeler's plots, so bizarre, so full of red herrings, false, double and triple identities, coincidences, fit well into the fiction and society of the 1930s, carefree and frivolous, which did not imagine the horrors of war in a few years. So Keeler's horrors, deformities, insanities (interned in a marriage by his mother, after he graduated in electronic engineering) fit well into the context. But in a few years they would be overtaken by much more horrors, and so the streak of surreal madness would no longer be adaptable to a world that grew too quickly and much more leaden.

Coincidences were part of his system: the plots of his novels leave little to description, because they are as dense as ever and indeed full of false clues and traces that seem of no use but which will instead lead to the capture of the culprit.

Also in this novel there is that structure of the plot, which Keeler invented calling it "webwork", a spider web novel:

“It was in fact the so-called“ spider web narrative structure ”, based on complex, convoluted and engineering diagrams that took the place in his preliminary notes of the more banal schematic scales. Keeler's art in fact vented into intertwining implausible and apparently inexplicable stories with other equally unlikely stories and apparently devoid of any connection with the central framework of the story. The author's dizzying ability lay in knotting all the threads of the plot at the end to create a phantasmagoric web of facts or KoinKidenze, as the author himself ironically nicknamed them, able to explain the inexplicable and stun facts and elucidations. even the most fussy and demanding reader. Double or triple identities, unlikely acknowledgments, multiple person substitutions thus dominated, in a singular and kaleidoscopic theater or fair of the absurd, which ultimately had the purpose of creating an ironic and very singular comédie humaine "(Preface by Igor Longo in The Marceau Case by Harry S. Keeler - Shake Editions, Milan, 2009, pp. 8-9).

In fact, there are several coincidences in The Fourth King too: the American heiress, Pettibon's fiancée, is a friend of Avery; Avery's trip to Roslyn's place is canceled due to a novelty; the heiress takes her stepfather's car that had been rigged to release the gas; the killer manages to block the mechanism with an old rusty nail, placed near the pedal of the car; the girl thinks it's an old nail and she throws it away, they restart the trap that clicks and kills it; the dead girl has the same wide eyes as the other person; the label that leads to the whole chain of events, which Fowell sees on a marked deck of cards, is taken from the envelope containing the checks and shares that Pettibon gives to the Russian paying him for silence, of which Fowell remembers because it contained his drawings; and so on.

The characters of Keeler's Romans are never intensely described but barely hinted at: in fact they have no  other nature than the mechanical one, they are puppets placed there to justify the plots of Fate, all that harvest of coincidences and causal facts that determine the strange trend of the plot.

The ending, in line with Keeler's others, is something unexpected: all the threads connect in solving the puzzle.