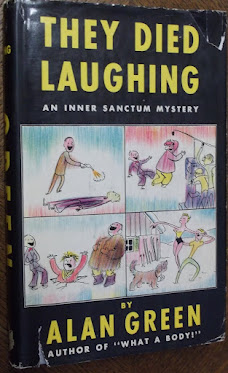 Surely after a prodigious debut like that of Green's first novel, which deserved the conquest of Edgar for the best debut novel, it would have been difficult for anyone to repeat themselves at the same levels. Indeed, the underlying verve of They Died Laughing, published in 1952, is the same: brilliant prose. It is certainly difficult, in itself, to be able to blend a brilliant style and comic verve with crime! The result is a black comedy, very black, which ridicules the glossy world of comedians of the twenties, thirties and forties, with their substratum of ineffable vices.

“They Died Laughing” deals with a crime that takes place in the context of a television recording of a trio of comic actors, very famous until the Great Depression of 1929, who since then had had ups and downs, to the point of seizing the opportunities given by the diffusion of TV at the American public, agreeing to work in the pay of commercial firms, in real sketches.

The trio is formed by Junior Watkins, Elroy Schneider, and Baby Blue. To the two men who already work in pairs, when you add the woman, success is at home. Of the three, however, the star is Junior: everything revolves around him. For a long time, Junior has even had an affair that everyone knows about with Babe, and even her husband Bo Llewellyn, a former circus athlete, who doesn't give a damn about his wife being in love with the manager, because it's all over for a long time the two spouses are together as a couple, but it's just a screen, even if they respect each other and still love each other.

One fine day, the advertising agent of the firm "Dormer, Porter, Hormer & Plant", that is, Mr. Hormer, who acts on behalf of the Glassay Grocer, who pays them for their television sketches, finances a new one, which it will have to take place at the well-known "St. Bernard" hotel. Actually, the television shooting was an idea of ​​John Hugo, grandson of Arthur Hutch, that whoever had the good fortune to read Alan Green's first novel, What a Body! in 1949, he has already met. In fact in this second novel, some of the characters of the first recur: Arthur Hutch is the owner of the hotel, being the brother-in-law of that Merlin Broadstone, who obsessed with diet and beauty of the body had created a SPA of high level on an island, as well as being the owner of many hotels, he was later murdered, and he, Hutch had become the main heir, being the husband of his sister) had also been the one who he had resolved the matter, yet leaving all the credit to that clumsy inspector John Hugo who had fallen in love with his niece; later, Hugo had also married her, and retired from the police, he had become Hutch's main collaborator in the management of the Hotel. Hugo basically dealt with advertising: he had invented the gimmick of the Saint Bernard dogs who brought a flask of liquor for the use of the Hotel's customers, and now he had proposed to have the television comic trio exhibit, right in the spaces of the Hotel in the middle to the snow, to sponsor its winter activities.

After filming has started, the crime suddenly takes place: Elroy Schneider, warns Huth and Hormer that she has seen through the window, Watkins dead, in his bedroom, locked from the inside; the strange thing is that Watkins was claustrophobic and therefore he would never lock himself in. They break down the door, because in fact the door is closed from the inside, and they find him sunk in an armchair with a bullet hole in the forehead, without any ticket and above all without a weapon. There would also be a way out, but it is a window at the top that communicates with the corridor, but it is also closed.

Almost simultaneously with the discovery of the body, under the door of the vice president of Glassay, Hulburt, a sheet is slipped on which communicates how Watkins had been seen passionately kissing Francy Wilson, a singer and actress with whom he is in love. Watkins was indeed an unrepentant Don Giovanni: in the past Wilson had obtained a job from him, of which he however took a large part of the salary, and moreover she had had to have sex with him to obtain it and be able to pay the debts of housing. He also took unpaid leave with Elroy's and Celeste's daughter, Gloria Ann. And then there was the romantic relationship with Babe Blue. Basically, no one would have had reason to kill Watkins, because with him the greatest form of income would have disappeared and the trio would have dissolved, and therefore only the passionate motive appears, even if this too deflates.

Everything will make sense after the second death occurs: that of Elroy, who apparently committed suicide, with a .38 caliber pistol among those used during the sketches to shoot at the cards. In fact, on the forehead of the victim, in addition to the bullet hole, there will also be a sign, given by the wick of an exploded blank cartridge, like those used in all the shots of the sketches. Why a blank cartridge other than the real one? 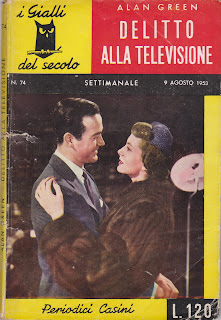 The reconstruction of Hutch will once again be the overturning of his nephew's theses, and the following will also assume importance: the contents of tampered blanks, owned by the late Watkins; the health conditions of Babe Blue; a sign stolen from the hotel theater; an attempted robbery in Watkins' room; Watkins' movements in the train, taken to get to St. Bernard. It goes without saying that the killer will come unexpectedly at the end.

Green is always very biting in his social criticism: after all, the trio of comedians, with their husbands, with their lovers, with their vices, with their weaknesses, express the golden world of American cinema and television of that period, following the Great Depression of 1929.

From the point of view of the structure of the detective novel, while not reaching the heights of the first (whose solution was close in complexity and virtuosity to those of Carr), the solution of this second novel is based on an overturning of what is said about two single crimes, so much so that the solution of the first crime and the framing of the fugitive from the room locked from the inside, automatically leads to the solution of the second death, but not in the sense that one would expect.

Very interesting is the question faced with the blank cartridges, and the action of the wick, to overturn an argument made up to that moment, as well as the burglary noticed on some cartridges, to manually remove the mechanically inserted wick, empty them of black powder and fill them with heroin. The trafficking and use of heroin is therefore another subplot in addition to that of Watkins' gallant adventures, which however does not load the novel with the typical atmospheres of the hardboiled novel, because essentially the traffic, limited to the troupe, finds its origin in personal events painful,

In itself, once explained, the locked room solution is trivial; nevertheless, the novel, which up to half has little rhythm, in the last twenty thirty pages, acquires a considerable one, to the point of nailing a clever but also compassionate murderer.