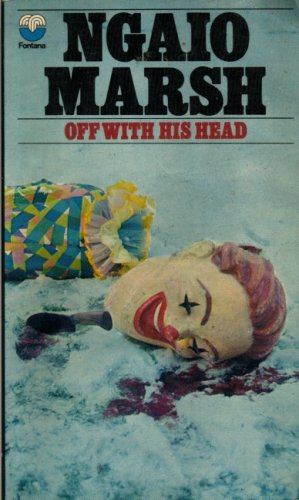 Ngaio Marsh's best-known Locked Room is Off with his Head, 1957), published in Italy from I Gialli del Secolo in 1958, just two years after its publication in the original language. This tells us an important thing: that this series, so mistreated, was however edited by people who had such contacts that a work that had appeared two or three years earlier in another language could be immediately published.

The novel was first published in the US in 1956 under the title Death of a Fool and the following year in the UK under the title  “Off with his head”, that is one of the exclamations made frequently by the Queen of Hearts in Alice's Adventures in Wonderland, by Lewis Carroll.

Theater of the events are the ruins of the castle of Mardian, on a hill, where every year the dance of the 5 brothers takes place, an ancient pantomime, of pagan origin, which is interested in Mrs. Bunz, a German who escaped Nazism, scholar of literature and history and folklore expert, who knew about this representation and wants to find out about it. However, the people she turns to are extremely reserved and absolutely do not want to collaborate with her: probably the war is still too close and she is still a German.

Representing the dance are the 5 brothers Andersen and their father William: while they must dance first with bells attached to their trousers and then they must continue the dance with swords, the father who impersonates the Old Jester, must recite some ancient verses, break a mirror, read the will, and then he must die on the scene, beheaded: for this purpose he wears a hat representing the head of a rabbit, which then, at the crucial moment, is untied, giving the sensation of a severed head.

The old man is stingy and possessive: he wants his children to be subservient to him and he too wants to decide their life. So it happened for her only daughter, who decided, years earlier, to flee to marry who her father did not like, and for this she was disinherited: now, however, the daughter of the disinherited heir presents herself, Camilla Campion. Her grandfather is happy to see her again, less happy are her children who are afraid of being deprived of part of their inheritance when their old father dies.

To complete the “idyllic” picture, there are Trixie, a beautiful local girl who loves one of the 5 Andersen brothers, Chris, but who in the past had an affair with Ralph Stayne, fiery great-grandson of old castellan Alice Mardian. Now Ralph is in love, in love with Camilla, but neither old William Andersen nor Aunt Alice like it. In addition there is Simon Begg, former RAF colonel and war hero, who has a workshop and who, like the Andersens, and Ralph, has a part in the pantomine, in which only male subjects play: Simon impersonates the horse, the Crack, lowered in heavy iron armor, while Ralph plays Betty, a hermaphrodite, half woman half man (who we would now call transex) as she has a long and large skirt.

The day scheduled for the performance, however, something goes wrong: even if in fact over 50 people attend the performance including Trixie Plowman, Alice Mardian, the local Sergeant Carey, Dr. Otterly, after the fake beheading, the old man (who should reborn to new life and then rise again, rising from the hole behind the old Mardian Stone, where Ernie, the epileptic son of Andersen, beheaded a combative goose) does not get up and so going to investigate in case he feels bad, they find him there where he had to be, beheaded for real, with his head turned in an unnatural pose as if he had made a 180 ° turn with respect to its axis, things if someone had put it there, still under the mask of the Jester, for some obscure reason. Called to investigate is Roderick Alleyn, of Scotland Yard, who, the son of a noblewoman, is more familiar than others in dealing with nobles. He finds himself untangling a skein that is not easy at all: a man is beheaded, yet none, I mean none, of the 50 present at the performance has noticed anything, neither those farthest away nor those closest. Moreover, the only sword that could have decapitated the old man, the sword of the epileptic son Ernie, the sharpest of all, so much so that it is sharper than a razor, is immaculate and bears no bloodstains. Even the other swords did not serve this purpose: so who and with what did behead the old William? And above all how?

Beyond a series of facts, Roderick finds in all the testimonies collected, as well as a common line, so many discrepancies when not declared lies, which make his search for truth even more difficult. All the more so since, going to examine the matter carefully, it is not that old Andersen in life had been very nice and appreciated; quite the opposite! We have several possible motives and therefore potential killers: first of all the 5 brothers, who from time immemorial have wanted to transform the blacksmith's workshop that has resisted for centuries, into a modern service station, which is also interested in Simon Begg who owns already a workshop; then Ralph himself, as the old man was against his and his niece getting together: Camillla herself may have had an interest in killing the old man, since it is rumored that he was interested, in the appearance of his niece, in changing the will and to insert it among the heirs, which would have yielded a lot to Camilla if it is true - as it was said - that the old miser was rich. Furthermore, Begg prevents Ernie, William Andersen's epileptic son, from speaking whenever he is about to do so, and this makes both him and the former subordinate suspicious; and Mrs. Bunz is also suspicious, due to the hatred that the old man reserved for her. Is it possible that she is not what she says she is?

The plot will be revealed after Alice Mardian will have spoken to Alleyn about a certain diary in which the pantomime ceremonial was described, which the Andersens had recited for generations, knowing the verses by heart. And after Alleyn himself will have demanded that all those who had assisted or interpreted any role during the pantomime, were present, expressly saying that only one of the participants had played in two different roles.

The solution will be magnificent, and will bring to justice a murderer who he will have killed not for calculation but for another reason, and who will have used an accomplice, for the staging.

Once again we are faced with a staging, and as I have been saying for some time, the most beautiful Locked Rooms are those prepared, with the help of another person who acts as an accomplice. It is evident that if 50 people did not notice anything, the crime must have been committed not in the place where the beheading should have taken place but elsewhere; but how could he have been beheaded elsewhere and taken there without anyone seeing anything?

We are faced with an impossible crime, more than with locked room, if we intended it according to the usual canons, that is, a closed place; and here we are in an open space, where not even the footprints are to make it impossible for the murderer to escape. But it is also true that the very nature of the event, a "theatrical" performance that took place in a predetermined space, in front of 50 people, who have not seen anyone escape, let alone kill the old man, make this "impossible crime" a highly suggestive Locked Room. Which has numerous points of contact with another Locked Room, by Christianna Brand, however: the horse (true there, false here), the armor, a beheading, the fact that in both cases the head is imprisoned in something (there a helmet, here a mask). It would seem to me that Ngaio Marsh, while basing one of his most original and best written and conceived stories, may have taken Brand's novel as a model, or in any case that something of that has remained in his unconscious, given that between Death of Jezebel and Off with his Head, there is an 8 year difference.

To make this novel incredibly fascinating there is also a double surprise, which I realized in retrospect.

First of all, there is no motive. Normally when there is a crime we ask ourselves: Cui prodest? Who does benefit? Who does benefit from someone's death and therefore who has a valid reason to suppress them? There are many motives here, but as it happens the murderer does not have a valid motive for killing.

The second surprise concerns death itself: it is the response to an attack. In technical language we could configure it as an excess of self-defense. However, the murderer orders William to be beheaded to disguise his involvement. Thus, a couple is formed: the real killer, and the fake one, which is instead considered real. In other words, those who behead do not kill but insult a dead body. The couple of the two killers (the real one and the false one) is different, however, from another couple formed by the murderer and his accomplice who prepare the staging. And it itself, and here lies the genius of the novel, is carried out without any premeditation of the murder. Normally when there is a staging it is to make people believe in one thing instead of another, and therefore, in the context of a crime, we can speak of premeditation: here instead the staging is not such because the crime is not premeditated. If anything, a representation is used as a staging by dividing it into two distinct parts: the first part of the representation is such in all respects (until the Jester, who in the representation was beheaded, lies in the hole waiting to be resurrected), while in the second it can be assimilated to a staging (when it is used to hide death elsewhere).