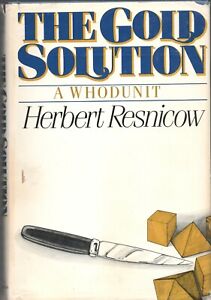 Herbert Resnicow died in 1997, after living 77 years. He was born in 1920, but his rightful entry into the history of detective literature took place only in 1983 with The Gold Solution, an overbearing and winkly pimp work that made him win a surprise nomination for the 1984 Edgar Award.

It was his official debut: he renounced the contemporary American Crime Novel, made of Hard-boiled mixed with social themes to recover the more classic Detection Novel, winking at Van Dine and Rex Stout.

For many years he was a construction engineer, fighting in the Military Engineers during the Second World War, and pursuing his profession until the day he decided to write a detective novel. The opportunity, if you wanted to say so, gave him a painful event: hit by a heart attack, he decided to pass the time by writing first stories, then a novel in which he inserted his knowledge of construction techniques together with a classic detective plot (acting like Van Dine). Until his death, which also occurred from heart problems, he wrote several other novels, some of which achieved considerable success with the public.

In it we find biographical hints: in fact, Alexander Gold, builder, like its creator, Resnicow in fact, suffered a serious heart attack. During his convalescence, his friend and mentor Hanslick Burton, a very wealthy lawyer, is offered to take up a case that seems to have no way out: a young, novice architect, Jonathan Candell, was found with a blood-dripping knife in hand in front of the dying famous architect Roger Allen Talbott, of the homonymous studio, famous for its pyramid buildings. What's interesting? The fact that the study where the dying man was found, located in the attic of a futuristic building equipped with the most efficient alarm systems, can only be accessed via an elevator, which is unlocked by Talbott himself; that Candell was called by Talbott less than a minute before his stabbing, and after only the waitress had brought him some Danish cheese and milk; that there was no one else in the studio but Candell and Talbot himself; and that the only safety doors in existence were equipped with alarms and bells, such that no one could use them without being immediately identified; moreover, there are no secret passages or false walls. Well ... basically a locked room, with only one possible killer. But he professes himself innocent: he is a practicing Jew, opposed to violence, he would have had no motive to kill Talbott. Norma, Hanslick's wife, first took an interest in his case. Then she, a friend of Pearl, in turn the wife of Alexander Gold, thinks that only he, the amateur detective, can solve the case, avoid the death penalty in Candell, and help Hanslick win a desperate case.

Alexander accepts, but only in exchange for a large reward: he, unable to move for at least three months, will have to resolve the case from his home on the basis of the dossiers and circumstantial evidence and investigations carried out, in his place, by his wife. , Norma. Here is the link with Stout: like Nero Wolfe, Alexander Gold is heavy, and does not move, and carries out the investigations, and will solve this very intricate case, relying on the precious help of his wife Norma who, like Archie Goodwin, is the shoulder to the great investigator. Archie, not Watson: Watson witnesses Sherlock Holmes' investigations, he doesn't conduct them like Archie does, and Norma. Among other things, it could also be said that it is not the only case of a novel that has redone in conducting the investigation of Nero Wolfe. In fact, 2001 is The Bone Collector, by Jeffery Deaver, which wins The Nero Wolfe Award, imposing the couple Lincoln Rhyme and Amelia Sachs, in which Lincolln is a disabled quadriplegic, and Amelia Sachs is the policewoman who is his longa manus.

The only possible suspects are Talbott's four partners (Bauer, Bishop, Dakin, Kirsh) who, however, were not there at the time of his death, his wife Irma (who, however, when her husband died was downstairs with the maid), and the father-in-law (Rufus C. Miller). But what motive would all six have had to kill the classic goose that lays the golden eggs, the most famous architect in America, who monetized any idea in rivers of money, with his famous pencil sketches, perfect, without erasures (yes he even said that in his youth he had emulated Giotto, drawing a perfect O freehand, and inscribing another perfect circle inside it), then developed by the team of architects who were around him in daring architectural solutions ?. It is up to Alexander to find him.

He manages to remove the mask from all four (envious to the extreme and eager to succeed him in society, at least three out of four): all four hated him, each reproaching him for the fame he acquired at their expense, without having even a small part of his fame and his money, when there was no other valid, more secret reason. Norma gives her husband the clue that he Gold, turns into another motive: the morbid love of Talbott, who like some film producers of the 1920s, sexually took advantage of all the "small, blonde and chubby" collaborators, for a only once, in her office, after having ensnared them, and always or almost leading them to a nervous breakdown, or to severe suicide syndromes (the secretary who the very rich executive falls in love with, who then abandons her). 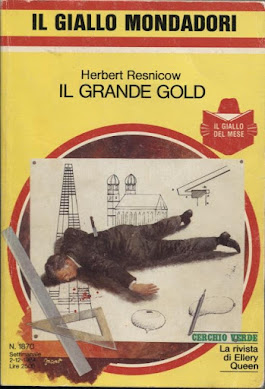 He will be able to identify the only killer, among the six suspects, destroying an unassailable alibi. Based on the most classic detective maxim, that is, when the possible has no place, one must attach to the impossible to explain the unexplainable, Gold bases his accusation, relying on a series of clues provided by his wife, former archivist, and mainly focusing the investigation on who could benefit from it: Cui Prodest?

If at first it seemed that all six would only have to lose from Talbott's death, digging deep, asking questions, even the least sensible, building possible relationships between seemingly strangers, Gold and his wife manage to highlight a plan carefully premeditated, for which it was only necessary to have a scapegoat within reach, Candell in fact, who had no possible relationship of hate / love with the murderer, so that no type of bond could be found with him. Any scapegoat: if Candell had not been there, probably some other poor Christ would have been chosen to be immolated on the altar of the perfect crime. But the construction has some invisible cracks, which Gold manages to make visible.

The Locked Room is explained not on the basis of strange mechanical devices or devilry, but on the contemporaneity of actions of which originally nothing was known and which he supposes, then looking for a series of proofs that can support it; and above all on a death pact.

An interesting novel, it is not distinguished by its narrative or stylistic quality, but by the wise and manneristic use of references, drawing on all the literature that developed before him: from Carr, Rex Stout, and even Ellery Queen. In fact, what else would be the innocent sketches that Talbott threw down on his latest project, which he was working on while the killer surprised him, made someone arrive there on the top floor, and walk silently on the thick and soft carpet, if not “the dying message” by Queen memory? Ignored by cops too real to have a shred of that fantasy that allows Gold to solve the case, and too ignorant not to have read even a novel of Ellery Queen's great creative season, they fail to see in the "turnip and salami" , for example, one of the only possible clues that the dying Talbott could have conveyed without his killer next to him being in any way suspecting that they were charges against him.

The only regret and even the only reproach I can give him is that he did not manage to maintain the tension for the murderer's accusation until the end, betraying himself a few pages before, and maintaining the tension only for the discovery of the accomplice, the 'creator of the staging.

What is the basis of everything? But obviously the vil money! And sex too! Two of the favorite causes that have always been the basis for real crimes and above all for those of paper.