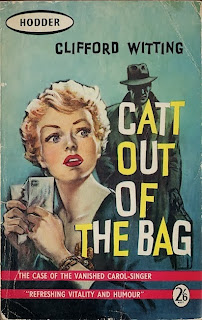 What do you read at Christmas if you are a detective stories fan?

Apart from Hercule Poirot's Christmas, Envious Casca, An English Murder, Dancing Death, The Finishing Stroke, No Flowers By Request, there would be many others, a little less known. To the latter belongs the book I decided to read , Catt Out of the Bag  by Clifford Witting, published by Polillo in Italy in 2013

Clifford Witting (1907-1968) was born in London, where he remained for almost twenty years until 1942 working in a bank. During World War II he served in the Royal Artillery and Ordinance. His first mystery, Murder in Blue, dates back to 1937: it was followed by fifteen other novels, in which Inspector Charlton almost always appears as the protagonist. In 1958 Witting was welcomed among the members of the prestigious London Detection Club. It was highly esteemed by Jacques Barzun and Wendell Hertig Taylor who spoke of it as: Witting started feebly, improved to a point of high competence, and has since shown a marked capacity for character and situation, with uneven success in keeping up the detective interest.

The narrator, nephew and friend of Inspector Charlton, participates for charity, in the singing of some Christmas carols, in the village of Paulsfield, to raise funds. Two parishioners, a woman and a man, take care of the collection of them, but the second is the one who brings the donation box, because he is the most skilled in convincing the residents to donate something. Parishioners sing Christmas carols on the street corner and then go from house to house to collect offerings. At the end of the evening they gather in the home of one of them who coordinated the activities, but Mr. Valvasour, let's say the treasurer, is missing.

The situation gets complicated hour after hour because Valvasour is nowhere to be found. The next morning, his wife inexplicably refuses to notify the police, although John Rutherford, the narrator, a friend of Inspector Charlton, and a friend of his, have lent themselves to help her track down Mr. Valvasour, and advise her to notify the police.  The woman's refusal would be motivated by the ridicule to which she would expose herself if her husband, whose work seems to be that of a traveling salesman, returned. However, they realize that the woman is hiding something instead, the real reason she does not want to notify the police.

The situation is further complicated when the empty offering box is found in the park. Could it be that Mr Valvasour escaped stealing a few coins? Rutherford and his friend investigate and establish that the man, who does not own a bicycle or even a car and who takes the train to Leicester, could not have taken it that evening. Although the wife claims to have found a note from her husband in which he communicates his sudden departure, secondly she is forced to reveal to the two, much tried, that nothing is true, and therefore she and her brother go to the police. . Charlton, having undertaken the investigations, is convinced, on the basis of the investigations carried out by the two men, and his conjectures, that Valvasour has never gone away and that therefore somewhere he is ... dead. Already he makes a cast of the footprints found in the park, and then following a hypothetical path that he may have made from house to house, he reaches that of a couple and here he finds a splinter of wood under the porch that matches a lesion in the offers, a sign that before being transported elsewhere, that box had been there. After questioning the owners of the villa, he first goes to a nursery where they found some footprints and where a lead pipe in a bin was stolen, and then returns to the villa inspecting the surroundings, convinced that the body has been hidden somewhere: they will find it in a well at the back of the villa, not used for years: Valvasour was hit, weighted with lead and thrown into the well. Subsequent investigations restart from the widow, aimed at revealing what she intends to hide: thus from her brother he learns the truth. The widow had discovered through a distraction of her husband who had sent two letters, exchanging addresses, that he was getting along with another woman in Leicester, who called him "wife", for which reason Valvasour who is named Tom Catt there instead , would have been a bigamist. And he would have dragged his innocent second wife into the scandal as well. In fact, other identities of the victim emerge: in addition to Paulsfield and Leicester, the man had impaled another heiress in Ilfracombe, Devon. From here a series of investigations start, which lead to the motive for the murder and then to the identification of the culprit, once much less carrion of the victim.

Let's start immediately by saying that the shock is proportionate to the fact that the reader will wonder: who the hell ..? Yes, because the killer here really falls from the sky. He is not a stranger, no, this is not; indeed, he is even in the front pages, but in such a way that one would never, ever think that he himself could have murdered Vavasour. The fact is that Witting, in narrating the story, tells such a series of amenities, precise and at the same time bombastic descriptions, which divert the reader's attention; and attention is increasingly diverted as the investigation progresses and if anything is capitalized only when the subjects are no longer Rutherford (the narrator) and his friend, Cloud-Gledhill, but Rutherford's uncle, the Inspector of the CID Charlton. But it is capitalized, in the sense that the corpse is found .. finally! On p. 150. One hundred and fifty pages to find a corpse, or rather the corpse, seems to me too many. 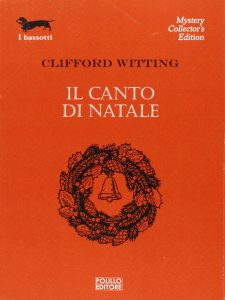 From this point, one would expect the investigation to take steps to focus in one direction; and instead every time it seems that a certain direction is found, that becomes only the springboard for another one until the picture of four identities is outlined (three in relation to the wife and a fourth, the real one), and therefore at least four possible suspects : wives, and their brothers. The beauty is that none of these four shores are the ones where the murderer is, who instead is completely disconnected from the rest, and instead finds the reason for his motive in an event that happened before the victim joined Mitzi ( his lover / beloved) the only real woman of his life, and then to the other three women who give him the living, each one not knowing anything about the others: essentially he takes from the four wives and gives to the first, to Mitzi. 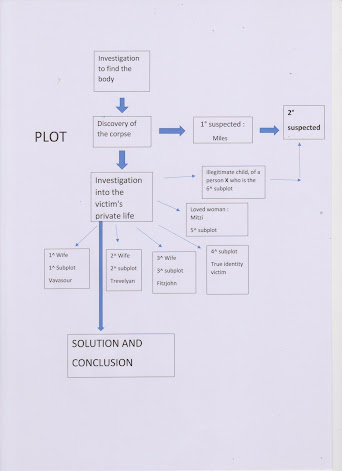 I must say that until the corpse is discovered, the style is deliberately very light and 100-150 pages can be read in an hour and a half, because much that is not important for the actual investigation can be skipped. Once you get to the discovery of the corpse, the writing becomes more precise and less light, and you have to be careful with all the information that is taken to keep up with the narrative. Of all these things very few are essential, indeed those such are so well hidden that they take on a significance only if placed in relation to the rest.

The only real gap in the novel is the culprit, who although present at the beginning of the novel or almost (and therefore not being extraneous to the narrative development) is completely unrelated to everything that is said: his line of contact is only the boarding house and a very dated letter, and a postmark on another one which sent back to the locality of Woodford. That's all.

For the rest .. a good novel. It reminded me of the development of The Death of Laurence Vining by Alan Thomas: even there the development is completely disconnected or almost, if you like, from the identity of the murderer.

The names of the places are all true: this at least favors the comprehension of travel around England.