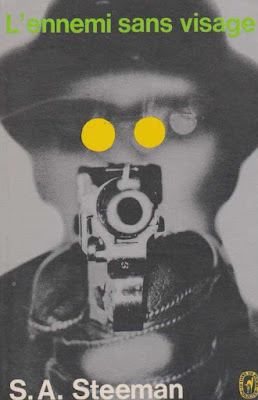 The undisputed protagonist of this novel is an automaton. However, not in the sense that is usually attributed to this word, that is, of an inanimate subject of a mechanical nature, which is moved by virtue of some wise mechanism; but in that of a previously inanimate human subject to whom a certain reason and life force are given.
Why Steeman never thought about using an automaton for a detective is not known. But it is not even so bizarre to remember how in those years both literary and cinematographic incitements abounded, concerning the animation of inanimate subjects, complex surgical operations, subjects that perhaps had more to do with horror than with yellow. But so much so that Steeman also wanted to give his very personal contribution: and what a contribution!
So after the Metropolis automaton by Fritz Lang animated due to an exchange of vital energy and soul transfer; after the Golem, being inanimate with mud, which becomes alive because of a sign that is placed on his forehead; after the intervention on the Siamese Twin in the homonymous novel by Ellery Queen, attempted by Dr. Xavier; after the creature that is endowed again with life force by Dr. Frankenstein of Mary Shelley (who in 1931 returned to be very popular by virtue of a fortunate film reduction, directed by James Whale, with Boris Karloff, still considered one of the most important ones), Steeman also wanted to make his contribution.
Stanislas André Steeman, when he wrote L'Ennemi sans visage in 1934 (also published as M. Wens et L’automate in 1943), however, was already a name in the Polar panorama. Belgian, born in Liège in 1908, before devoting himself to crime literature, had devoted himself mainly to comics, and to journalistic activity from 1928 to 1933 for La Nation Belge. It was his journalistic activity that favored his definitive inclination as a writer of detective novels: in fact, together with another journalist under the same newspaper for which he worked, Herman Santini (pseudonym Sintair), had written his first 5 novels, for then publish novels each on their own. However, even while collaborating with his friend, in 1930 he had started writing alone, publishing three novels: Péril, Le doigt volé; and, reaching fame with Six hommes morts, which had won the “Grand Prix du Roman d’Aventures”, in 1931. His most important character, Vorobeitchik Venceslao, called Monsieur Wens, was introduced in this novel.
Steeman was best known for his loyalty to the detective styles and rules. In fact, a large part of his first production faithfully follows the orthodox canons. But his genius could not be regimented. And so the novels are each marked by a different genre, tone and style: there is the thriller, the parody, the psychological novel, the mystery.
The story, if you look at it well, is not that interesting, if you see it under the eye of originality: it is an experiment, a fusion of fantastic and detective genres. In this it can be seen as the very first attempt, even if not perfectly successful: Carr will succeed with imaginative results with The Burning Court and The Crooked Hinge. But Carr is Carr, and Steeman is Steeman. Without taking anything away from the inspiration of the Belgian. Carr re-evaluates the past by transfusing it into the present, Steeman re-evaluates the past ... and that's it. 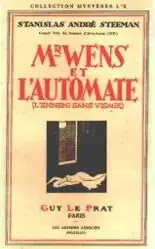 In this we can see the limitation of the attempt.
In the revaluation of the past, Steeman intersects his action with that of Mary Shelley, with that of Gaston Leroux, and also with Fritz Lang.
Jund is a man who no longer expects anything from life. He was sentenced to death and waits for the fatal dawn, in a state of pure terror.
The beginning of the novel gives us the image of this man, of this criminal, who is afraid that someone will come to the threshold of his cell because this could mean his death: 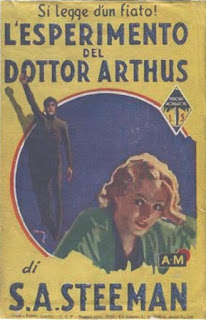 In a few lines, Steeman outlines the figure of a man sentenced to death, who does not want to die: I underline the strength of the phrase which, with the similitude it contains, well represents Steeman's psychological incisiveness: “A l'stant instant homme, comme touché par une décharge électrique, se réfugia dans l'angle de la muraille, les traits convulsés par la terreur ".
Tuesday is the day of execution, but also the day of salvation for Clarence Jund. But at what price? To save his life, Jund will have to accept to undergo an experiment: his life energy, his mind, his brain will be replanted in an automaton. An automaton, not a collage of corpses as in Shelley's Frankenstein, but here too electricity has a fundamental part; and Fritz Lang, peeks out, in an authoritarian way. It is no coincidence that the transfer of vital energy of the soul also takes place in Metropolis, his 1921 science fiction film. In some ways, Metropolis seems much closer to Steeman's novel than Whaley's Frankenstein from 1931!
The fact is that the reader for the first time, perhaps in the literature of the genre, feels pity for a criminal like Jund, condemned to a terrible death: to live but like a larva can do it, deprived of his vital energy, his passions and fears, of his mind.
Before he dies, another reference to the past will peep out: Jund tries to escape, a desperate escape, because to keep an eye on him they have put near him that Ramshaw who arrested him and who has the order to kill him in case he tries to run away. And as they struggle, they break into a dark room. That when illuminated, it is revealed full of automata, including the famous Chess Player, also mentioned by Edgar Allan Poe, the automaton of Maelzel (and of whom Carr will speak in The Crooked Hinge, 1938).
Who are the main characters of this drama? Professor Arthus (a slightly mad scientist), his two children (Maximus and Tiburcio), Michael Patiny frequent visitor to Arthus' residence, Clarence Jund (the prisoner), Ramshaw (the policeman), Monsieur Wens (the private investigator ). Why..drama? Because soon, the events begin to turn red.
On the evening when Arthus has to carry out the brain transfer experiment, the laboratory takes on the imponderable: you can hear the sounds of struggle, broken furniture and then a gunshot. The door is locked from the inside. When they break through the door, they find the professor dead, murdered with a gunshot, and only two bodies on the two operating tables: Jund and the automaton, ready for the operation. Indeed, to be sure, the operation must have already started, when the killer killed the scientist, since he began to incise the skin of Jund's skull (who is asleep) and a basin full of blood proves it. So neither of them (the inanimate automaton and Jund) could have participated in the murder. And yet ... they don't find anyone in that lab.
Indeed, when they return to the laboratory, the automaton is no longer there. On the other hand, from that moment he appears several times, in various places of the house, in spite of stalking. Do you use secret entrances?
Here is another illuminated presence of French literature in Steeman's novel: Gaston Leroux. Not one of his novels with Rouletabille, but the universally known one, Le Fantôme de l'Opéra. Those who have read it will know how the Phantom manages to appear and disappear inside the Paris Opera House. Well: Steeman's black man appears and disappears in the same way, and like the Phantom, this too is masked.
Obviously I'm not telling you how it will end after another murder.
I want to make a consideration on the Locked Room, considered by Roland Lacourbe as one of the best Locked Rooms ever: in my opinion, an attempt is made to merge two of the three temporal ways of implementing a Chamber according to Carr: first, during and then. In practice, the fusion between the before and the during is attempted. How? Here is the point.
If the professor's death had been carried out before the noise coming from inside the room, it would have been necessary to find something that could have produced those ruins. But there is nothing, or anyone, outside of two bodies: one waiting to be animated and equipped with a human brain, and the other waiting to supply the brain, but completely under narcosis and in such a state ( also ascertained by Wens) of prostration, such as to be close to death, that it would have been impossible for him to kill the professor. And if the professor had been killed after the crash, the possibility he had committed suicide should be considered. But then why do all that slaughterhouse inside his laboratory? And why then? Just when he was about to complete his business!
No. The professor was killed.
In my opinion, Edward D. Hoch may have read Steeman's novel before writing his The Frankenstein Factory (1975) if it is not a coincidence, as it is also in Hoch's novel the creature has a perfect body, even there he disappears, a series of crimes is attributed to him.
Clarence Jund will not live as a wreck for the rest of his days, but will return to Louisville prison, and here he will be taken to the electric chair.
Steeman reserves for us in the last lines, however a promise of salvation. From the only person Jund would never have thought was his savior. As if to say that "hope is the last to die".