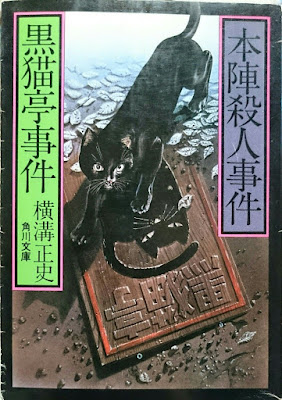 A short article, in the Italian book translated directly from Japanese, makes it known that this novel was published in 1972 together with "Honjin satsujin jiken"). For the first edition, my acquaintance Susumu Kobayashi told me that the novel is from 1946: it was serialized first in the Horeki magazine, and then published in the book in the same year or at the latest the following year, and is therefore one of his first novels: according to my calculations, all to be verified, it could be either the Second o the Third in the series of Kindaichi Kosuke, after the first 本 陣 殺人 事件 Honjin satsujin jiken, because Chōchō satsujin jinken  蝶 々 殺人 事件  (also of 1946 like the other), it isn’t Of Kindaichi series as told me Ho-Ling that I thank. If  Gokumon Island (獄門 島, Gokumontō) Is the second novel, mentioned in the novel (but it would go against Susumu's claim) because it was published in 1947, Kuronekotei would be the third, but it should be the second when it was published.
Kuronekotei jiken is a very classic whodunnit, very captivating, as it exemplifies, to the extreme consequences, the case of the faceless corpse.
A patrol officer, Nagatanigawa, while patrolling the area entrusted to him, hears a strange noise coming from a land where "The Black Cat's Inn" stands, a recently abandoned inn, and through the crack in the fence, he sees a young man bonzo, Nikko, who digs with a shovel, in the garden behind the inn; he resolves to enter when he realizes that something is wrong. In fact, having reached the bonze, he sees that a buried corpse emerges from the pit: they move it, and clean its face, at least to understand who it may be, but beyond understanding that  is a naked woman, with bare breasts, it doesn't more can be done because the body is in advanced decomposition, and in the face already eyes and nose have disappeared leaving cavities and mouth and retracted showing the teeth; the only thing alive is the white worms that move on the body. Shortly after, the carrion of a black cat, with its head almost decapitated, buried near the corpse is also found.
Once the Central is called, the Investigation Coordinator, the Quaestor and the Inspector Murai arrive and the investigations begin.
Although the previous owners Oshige and Itojima Daigo have left almost hastily, and having been recognized by Nagatanigawa just a few days before the discovery (even if Oshige kept his face hidden by a shawl), the acquaintances of the two, that is, the fact that they had both two lovers, he, a certain Kuwano Ayuko dancer, and she, Kazama Shunroku, an entrepreneur from Yokohama, lead to speculate that the corpse could be that of Oshige (even if the autoptic survey would lead to attribute the age of that rotten corpse to a 25-year-old woman) and then the research guidelines for the allegedly uxoricidal husband Itojima Daigo and for the lover Kuwano Ayuko are issued.
Here, however, a strange guy enters, named Kindaichi Kosuke, a type so scruffy as to arouse more than one suspect, but when it is understood that he is who has solved the big cases by helping the police, including first of all the Locked Room of the case of the Honjin Murder, the investigators immediately accepted his help, also because he presented himself with a ticket signed by a member of the police. His entry changes the search strategies: the women present at the inn (attendants) say that more or less in the days in which the murder must have been executed (one is certain on the basis of the newspaper pages stuck to the doors smeared with blood), Oshige Daigo was locked in her room and from there she never went out, and for a supposed skin allergy due to a poor quality greasepaint, she had not shown her face by the women. On the basis of this and other oddities, the search order is reversed: in fact, the two spouses Oshige and Itojima Dajgo are being sought, while it is assumed that the corpse in an advanced state of decomposition is that of Kuwano Ayuko.
Kosuke, however, has first-hand information, provided by his friend Kazama Shunroku, who happens to be Oshige's lover. And based on what he tells him and his conjectures, Kosuke discovers, even before the police know, that Itojima Daigo is also dead, murdered. Meanwhile, another woman, one such Ono Chiyoko, had come into play previously, with whom Daigo had returned from China some time before, before finding Oshige.
In this hodgepodge of women, weak like Ono, forced by Daigo to prostitute herself, strong like Oshige, and disturbing like Ayuko, and powerful and established men like Kazama, member of a Yakuza gang, of Daigo, cowardly and strong with women, and pervert like Nikko, Kosuke will find the tangle of a tangled and very complicated mystery, full of surprises, the last of which will concern Nikko, and will be able to identify the murderer and finally give a certain name to the buried female corpse.
The novel, which is short also originally reads very well: the writing is fluid and the pages scroll one after the other which is a pleasure. 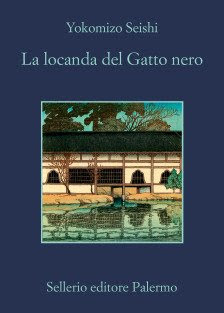 It is structured according to a tripartite structure: there is an introduction, which is a sort of conference in which the author divides himself into a dialogue that develops between Yokomizo and his character, in which he deals with the theme of detective novels with the faceless corpse that lends itself to a series of variations; then there is the real novel; and finally an epilogue. The split between novelist and author, in my opinion, is a tribute to western literature, for example Ellery Queen. And besides, he is not the only Japanese author to adopt it, since after him Rintaro Norizuki, doubles his author in the detective, imitating the solution of Ellery Queen to which he clearly refers, while in Yokomizo the split is based on two different characters : author and his character, the first who puts the adventures of the second into prose (a sort of reversal of what is the normal situation of each story, in which the character identifies himself with his author whose ideas he develops).
The introduction, with its mini lecture on the three strands of the mystery novel (doubling of the assassin's personality, locked room, faceless corpses), however, exemplifies a further value of this small novel, which stands as a sort of "study ", in the manner of other GAD novels: I think for example of Philip MacDonald's The Maze, in which the basic idea of ​​its author is analyzed in a form applied to the mystery, from a disascalic point of view- parody. In this case, the novel is a kind of exemplary application of what is the theme of the "faceless corpse and its variations": in this the novel, starting from an absolutely impossible identification given the advanced stage of decomposition (evidently in Japan did not ask for the dental formula), a series of theses and counter-theses develop, in attributing the faceless corpse to one identity or to another or to another. Indeed, this issue also involves another variation, which is that of those who cover their faces making identification impossible: is the woman who is together with Daigo, seen from Nagatanigawa, Oshige or Ayuko? As you can see, the hypotheses flock. Is the woman inside the inn, the mistress who is locked in her room from a so-called skin allergy, actually Oshige or Ayuko too? Or is she Ono Chiyoko who took Oshige's place? Or is she Oshige who never makes his face visible, why do you think it's not her while she is?
So you understand what novel is: a classic brain-breaking novel, super deductive, which is based on reasoning and its infinite variations. It reminded me of La Double Mort de Frédéric Belot, by Claude Aveline, which presents the theme of the doubling of an identity in its double, for the continuous reversals and hypotheses that identify the truth and overturn it on the basis of gradually acquired clues.
The limit of this novel is its brevity and therefore the reader is left little to compete with the reader: the action is very narrow, and if the various conjectures had been advanced during the novel instead of in the final explanation, the novel he would have gained it, despite being extremely rewarding. Only one thing is not explained by the author, and perhaps it is to be found in the double personality of the bonko Nikko: the fact that it is he who draws Nagatanigawa's attention with his screams and with the burial of the corpse, while Kosuke in the explanation he indicated as the accomplice of the murderer, as the one who buried the corpse: so basically why does Nikko scream so much if he buried the unknown female corpse? Either he is a stranger to the burial, and then he should give a better explanation than what he gives, that is that from the temple that is behind the inn he would have seen a leg emerge from the ground and for that he went armed with a shovel and lantern, when a carpenter who lives in those parts spontaneously provides a testimony according to which there was no cadaveric leg that emerged from the loose ground. Or he is involved in it, and then it is not clear why after having buried him, he does all the noise in front of the burial, drawing the attention of the patrol officer who otherwise would never have approached. Unless he suffers from a double personality or has staged that part to take revenge on those who, after using him as an accomplice, did not grant him what he had promised.
All this however is not explained by Yokomizo, and is the only drawback of a beautiful novel.
The black cat, from which the novel takes its title, has an important part in the solution, but obviously if you want to know, just read the novel.
Pietro De Palma

P.S.
A friend of mine , Gabriele Crescenzi, who read one of the LRI publications of Pugmire & Skupin, i.e. the stories of Tetsuya Ayukawa (I have got, but I didn't read yet), after reading this review in Italian, since he had not thought about my reference on the dental formula, he told me strangely in one of Ayukawa's tales (early 1950s) to recognize an unrecognizable corpse, reference is made to the dental formula, which means that either in Japan in 1946 it was still not used or Yokomizo does not contemplate it because otherwise he could not have put his plot into practice