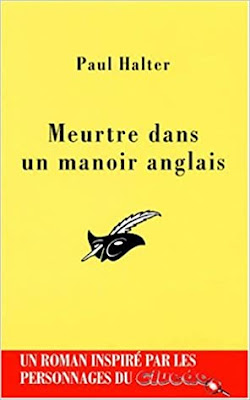 Meurtre dans un manoir anglais, is a 1997 novel.
Paul Halter wrote it after L'arbre aux doigts tordus, from 1996 and before Le cri de la sirène from 1998, in the Twist cycle. Actually in 1996, he had written another novel, Le cercle invisible, with a subject in its own right.
First of all this is not a novel. I have sometimes said, in my analysis of Halter's novels, that in my opinion, except for some well-identified cases (obviously among the most important novels, Le cercle invisible, La quatrième porte, La mort vous invite, La mort derrière les rideaux, La chambre du fou, La septième hypothèse, A 139 pas de la mort, La toile de Penelope, Le brouillard rouge, Le fleurs de Satan, La tête du tigre), Halter often builds his books by joining separate stories and then joining them directly arrival: e.g. Le géant de pierre or L’image trouble (in which a story in the distant past is linked to one in the present), Le cri de la sirène (in which the stories of two people are linked together), and various others. In this case even, the novel becomes a container that brings together seven stories and then unites them in what is the origin of a famous board game, the Cluedo, and in which Twist and Hurst appear in the beginning, and in the end that explains everything.
Basically something has happened that is not known whether to explain as an accident, murder or suicide. Hurst gropes in the dark, and Twist to whom he turned, advises him to read the seven stories of those who were invited one evening, to Dr. Lenoir's home, to participate in a new game invented by their host: each of them, involved in a fact of blood, either as a spectator or as an interpreter, he would have to tell his story, in front of the others, together with the landlord, or in the absence of the same to a representative. Then they would play together with the target shooting, they would have dinner together, and then at the end of the evening the landlord would give them a sensational surprise. So Hurst reads the seven stories involving seven guests: Miss Rose, Colonel Moutarde, Dr. Lenoir, Professor Violette, Mrs. Leblanc, Dr. Olive, Mrs. Pervenche. Among them, according to Twist, the murderer is hiding, because what they are involved in, in his opinion, is a premeditated murder.
The seven stories are:
Rose: Locked Room. Rose's boyfriend Philip, while in the company of his uncle, in a library closed from the inside, does not know how to explain how Rose's uncle behind him was killed by an arrow, with the window wide open, but in front of a high wall and an immaculate snow in which the footprints of those who should have fired the mortal arrow are not noticed
Doctor Lenoir: disappearance of his wife and reappeared in the bench chest of a tenant from the same building. The fact that a key opens two apartments of the building, gives rise to two antithetical hypotheses, in the context of a machiavellic murderous plan, in which a candlestick stained with blood enters, two chests, one per apartment, and a key that opens two different apartments and therefore allow not only the condemned to kill but also Lenoir to enter the apartment of others and use it for the same purposes.
Colonel Moutarde: premonition of arson, blackmail, and murder. The Colonel would have discovered that at the time he served in the police, a colleague of his had blackmailed the owners of the properties where a psychic predicted that fires would break out, so that they would pay if they didn't want them to really burn their property.
Professor Violette: premonition, murder of a woman when a friend of hers dreams that it will happen. The psychic is suspected of having hatched a trap to mask his guilt, but is then recognized innocent, except to discover that when he was a child he had witnessed the same scene, in which his mother had been killed by the same murderer of his friend. 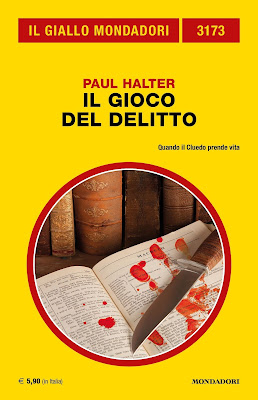