William Krohn : The Impossible Murder of Dr. Satanus, 1965 - in EQMM (april 1965) and in Mike Ashley's "The Mammoth Book of Perfect Crimes and Impossible Mysteries", 2006 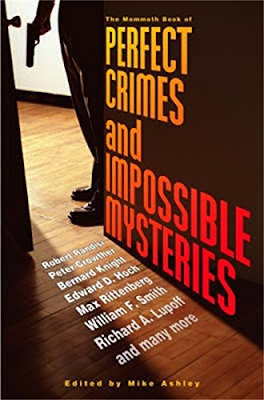 Several years ago Igor Longo told me about a young man who had written two phenomenal locked rooms and then disappeared from circulation, without telling me who he was.
In more recent times I thought he was James Yaffe, the author of the novels with Mom, but if it is true that as a young man he had written stories that were impossible for the E.Q.M.M., he had not written only two, but several; and they are not even so impossible for me,I must say. Who was the mysterious boy then?
Two weeks ago, I read a story in English, which I don't believe has ever been translated in Italy and understood who was that boy: The Impossible Murder of Dr Satanus, by William Krohn.
Krohn is not dead, in fact he is alive. Born in 1945, he is now known as Bill Krohn. He is one of the greatest critics in the world of author cinematography. He has written texts on Kubrick, Hitchcock, Bunuel. At the age of 18 he proposed his own story to Dannay, the one we are talking about today, published later on EQMM in April 1965. Later he proposed a second, which Dannay judged to be extremely complex, and which was rejected. Since then William Krohn disappeared as a writer to reappear as Bill Krohn, a film critic.
Bill Krohn's only published short story was included in a collection of short stories by Mike Ashley: The Mammoth Book of Perfect Crimes and Impossible Mysteries, in 2006.
Charles Kinball, an illusionist known under the pseudonym of Dr. Satanus is found killed in the elevator of the Hotel Bowman, where he lives. His wife says he has been unusually worried for some time. The night before, after the show, his manager David Hooker went to see him, and then Kinball had his short pistol in his hand. 32. The next day, his young wife Margaret said that he had left a few minutes after 7 o'clock am, because he had an important appointment: he was expected on the ground floor of the hotel by a big man, a certain Bailey, a well-known private detective, that he should have handed him the compromising photos of his wife, since he would have liked to use them to divorce. But when the cabin arrives at its destination, Kinball is lying on the ground, stabbed to death. On the ground, a cal. 32 pistol is found inexplicably and a metal tube, a Maxim silencer, is nearby. But no gunshot wound is found.
The testimonies of his wife and Bailey coincide: she says her husband had left a few minutes after 7 o'clock am. The cabin takes about 45 seconds to go down from the eleventh floor where Kinball lived, to the ground floor hall where Bailey was waiting for him, a highly respected private detective, who called the Homicide Squad after finding the body in the elevator, and which states that during his descent the elevator had never stopped.
Charged with investigations is Lieutenant Doran, who soon has a formidable headache, since he does not know how to get out of that juniper that has happened to him: a man leaves his apartment on the eleventh floor of a Hotel, takes the elevator and forty-five seconds later he is found killed by three stab wounds, without the knife being found in the cabin, without anyone having opened the steel doors of the floor from the outside, and without anyone being able to penetrate from the hatch of the cabin, since the door is closed from the inside by a padlock. 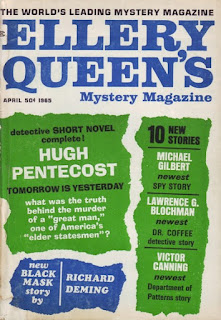 Therefore Doran relies on the insight of his friend Richard Sheilan, such a thin and tall man, with disproportionately long legs and reddish hairs, which has already made him awkward at other times.
Sheilan after having told the dynamics of the facts, and having taken note that in the hotel Kinball and her two major collaborators (on the second the beautiful and charming Hooker, on the ninth Gurney, Kinball's right hand man, and to the eleventh he and his wife Margareth); that in the hotel there was no slide for linen; that there had been no attempt to open the doors of the various floors; that two witnesses attested to the same thing, namely that Kinball had taken the elevator at about 7:03 am and he had arrived at his destination with dead Kinball at 7.03-7.04 am; that a short cal 32 pistol and a silencer had been found in the cabin, but no knife, weapon of the murder, elaborates his theory, which he then verifies with inspections of the places, nailing the murderer, who, not being able to be suicide , must be either the wife, or Gurney, already known as a robber, or Hooker, indicated by the photos of Bailey, as the lover of his wife Margareth.
This is a rare spectacular locked room, played by only one character, in the elevator: before this, I notice the wonderful novel by Alan Thomas: The Death of Lawrence Vining, and a story by Sam Jaffe, also published on EQMM, who has a solution very close to that of a well-known english writer; and of course the four-handed novel by Carr and Rhode: Fatal Descent. Unlike Carr's novel, the locked room is not based on the trick of the killing room (probably a Rhode stunt), but on a purely illusionistic game. Because Krohn's second story was not deemed worthy of being published and others by other writers were, one can only hypothesize: if the reason for the lack of publication was the high degree of complexity, then I would like to be accused because a shorter edition of Carr's The Third Bullet was published, which in terms of complexity, is quite a lot. Probably if Krohn had been a Dannay’s friend, he would have had some more chances.
The genius of the story lies in the perspective: if the story is not seen in his plot through what he wants us to believe, then we can also be able to try to get to the solution proposed by Richard Sheilan. Because in essence, like all magic tricks, this one is too: illusionism is in history, not in one particular. The curious thing is that in our case the victim is an illusionist. Does it mean something? One of us could think he’s an illusionist as The Magician Merlini, or Ernest H. Fitkin, also known as "Il Gran Galeoto", or Eugene Tarot who is also an illusionist. No. I wand say: the fact he’s an illusionist could have another meaning in this story? We know that by his own admission William Krohn had read earlier in his story, Carr's The Three Coffins, which is another novel played on illusion. Isn't it that young Krohn had also read Rawson's Death from a Top Hat?
The only clue on which Sheilan unmasks the illusion is the gun. And the time. Why?
If you explain these clues, then you can explain everything. In essence the illusion in illusion: because here, there are two illusions: one that should have been created but is not, and another that was not wanted to be created, but that develops because there are the presuppositions on which that which does not take place is based.
Your head hurts. I know. But the explanation is extremely simple.
But only if the cards are recomposed in the right order.