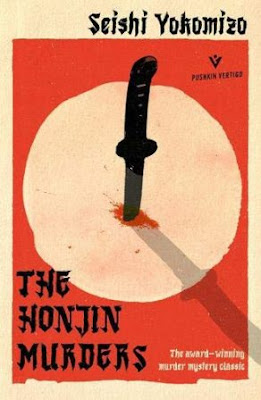 Yokomizo Seishi, the first great Japanese novelist, the one who with Edogawa Ranpo is considered the founder of the western Japanese detective novel, was born in 1902.
For many years his family cultivated the hope that he, graduating from the pharmacy, could carry on the family pharmacy, while instead he was more attracted to creative writing, and in particular to police writing.
Known Edogawa Ranpo, the greatest writer of the 1920s and 1930s, he was spurred on by this to write, but success did not come at the beginning. When it was thought that the first real success, Ningyo Sashichi torimonocho, had launched him, Japan entered the War and therefore his ambitions were arrested. Moreover, suffering from tuberculosis, he had to take refuge with his family in an inaccessible area, coming in poor conditions. With the end of the war, and the return home, Seishi returned to ascribe and found success in 1946, with the two novels Honjin Satsujin Jiken (本 陣 殺人 事件) and Chōchō Satsujin Jinken (蝶 々 殺人 事件).
Followed by many readers and considered one of the greatest Japanese writers of all time, called the Japanese Carr for the many impossible and supernatural situations or bordering on horror, he reached the maximum of fame after twenty years, when he published the novels on Inugami family.
He died in 1981.
The story takes place at the end of November 1937.
A man shows up in Yamanodani village in Okayama and asks about the Ichiyanagi residence. Well taken, the news spreads, because that man, rather scruffy, has his right hand with only three fingers. The time to ask for information and a glass of water and immediately he starts again: he has a disturbing aspect, moreover because a wound starts from the mouth that runs all over the cheek, almost as if the mouth had been opened in two.
The strange visit goes hand in hand with the wedding party of Kenzo Ichiyanagi, the eldest son, with a girl of far more modest birthplace Katsuko, coming from a family that has grown rich over time, without however having the nobility of the Ichiyanagi.
The girl was not very well received, but Kenzo has imposed herself. Kenzo's mother who is the one who criticized the choice of the son the most, would like the girl play the Koto, the traditional Japanese instrument, which the bride plays during the wedding ceremony as is in the tradition of the Ichiyanagi. There is a moment of impasse, then Kenzo's little sister, Sukuko, takes the burden.
Meanwhile, died Sukuko's cat, who was buried on November 25, to avoid the belief that dead unburned cats turn into ghosts. Buried on the wedding day! There are persons who are horrified by this
In this strange atmosphere, in which a part of the family members are lined up against, especially the mother of Kenzo, Itoko and Ryosuke, a cousin, with his wife Akiko, and others are indifferent, such as Saburo and Sukuko, the two twins and Takaji, his medical brother, Kenzo is married to Katsuko. At the wedding the bride is represented by her paternal uncle, Ginzo. But on the night of the wedding you can hear it ringing, at a certain time you can hear screams coming from the house of the spouses, separated from the rest of the complex. And then the sound of the koto.
Ginzo gets dressed and with the help of Genshiki, a farmer, they go to the house, whose shutters are all closed, from the inside. Outside in the snow, a bloody sword is stuck in the snow, but there are no footprints around it.
The two beat in silence on the shutters, then with an ax they manage to enter and find Katsuko dead and above her collapsed Kenzo, also he, dead. No one else in the house.
In a house locked from the inside, including windows, except for a window, but too narrow for a man or even a child to pass through.
They call the police. Inspector Isokawa, in charge of the case, suspects everyone but does not know what to do. The fact that Takaji, the only one not to attend the wedding ceremony because he has just arrived on a mission, but there is something that makes Ginzo believe his testimony about the arrival time is false, causes him to send a telegram in which it’s solicited the presence, at the house of the Ichnayagi, of Kindaichi Kosuke, a young man whom he has adopted, and who has become a famous private investigator, despite the very young age and one, is grateful to him. 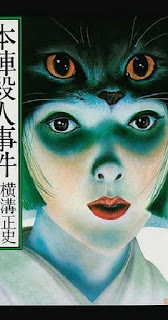 A series of footprints are found, imprinted in the snow on the side of the house opposite the one where the tragedy took place. As if the killer had entered, he had closed the door behind him, perhaps he had hidden in the closet where traces of blood were found until the moment when the two spouses had returned for the wedding night and then he had gone out to kill them. But ... where would he go if everything was closed from the inside?
Kindaichi will immediately have to put aside what is certain proof from what seems to him and from what is clearly false: the famous sound of koto, first of all attributed to koto but not from koto; a characteristic noise like that of a mill, heard roughly at the time of the death of the two spouses; Kenzo's diaries, from which torn pages are missing; a mysterious relentless enemy of Kenzo; the three-fingered man: the fact that fingerprints of three bloody fingers were found everywhere in the annex of the spouses, but no trace of the man was found; the lack of the koto bridge; a sickle, stuck in a trunk around the house; the presence in Saburo's chamber of a well-stocked library of enigma detective novels, with numerous examples of Locked Rooms, and the similarity of the case in question with that described in Gaston Leroux's Le mystère de la chambre jaune; the presence of Sukuko, at night, near the cat's grave, which will be confirmed to have been actually buried, after a first reconnaissance, and that at a subsequent one by Kosuke, something else will also be found in the cat's "coffin", hidden after the first; footprints on the side of the house opposite the one that hosted the drama.
Kosuke and Ginzo will discover in a charcoal burner the clothes and shoes that someone tried to burn, and the man's corpse with three fingers, also killed by something extremely sharp, buried under the clay floor.
Then there will also be the wounding of Saburo, which took place with similar conditions. 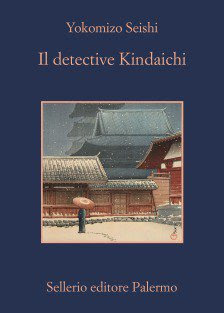 
"Roger Scarlett is a pen name of Evelyn Page (1902-1977) and Dorothy Blair (1903-1976?). This somehow forgotten piece in America is comparatively well-known in Japan thanks to Edogawa Ranpo's famous top ten lists in Gen'eijo. Ranpo even adopted it later as Sankakukan no kyōfu (The Horror of the Triangle Mansion, 1951)".
And he concludes that just such an abundance of Locked Room texts in a house in which a locked room crime had occurred convinced him that perhaps it was a sophisticated plan designed by a diabolical mind whose canvas had been inspired by those novels.
In short, as you can see, a main novel of the first detective fiction of Japanese fiction.