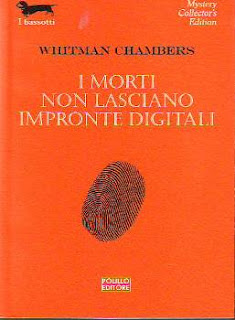 Elwyn Whitman Chambers (1896-1968), born in Stockton, California, wrote eighteen novels setin San Francisco, the first of which was, in 1928, The Coast of Intrigue. It was a warm start, since just after the release of The Navy Murders (1932), written with Mary Strother Chambers, began writing by jet and until the end of World War II, he published thirteen novels. In 1946 he devoted himself mainly to the movies, going back to writing in 1953: signed three other novels, because he took care of collaborations in television scripts, until his death in Los Angeles.
Dead Men Leave No Fingerprints presents as a subject investigator, not a policeman like Michael Lord by Charles Daly King or a private detective in the manner of Poirot or Philo Vance, but one that instead comes close more to Bill Crane by Latimer and Dashiel Hammett's Sam Spade, as ways of behaving, and that, at the same time, resolves an investigation of classical style.

Namely, a a mystery that in the movements may appear to be similar to a Hard-Boiled.
Stanton Lake is a private investigator who has an agency that shares with his friend Abe Bloom. One day arrives a beautiful blonde, classic kind of femme fatale, Hilda Haan, famous Danish actress, who, secretly to the mass media, and counting on the support of a girl  friend that acts as a stand-in and serves to divert printing, has fled with Theodore Raybourne. Hilda asked Lake to help her own against Theodore, because she understood too late as he does not love her and is attracted only by her money; in addition he holds the compromising papers which, if disclosed, would throw the feed to the press and her private life and, consequently, her popularity would suffer an upheaval.
Lake, along with his partner, then try to sneak by stratagem, in the house where willy-nilly Hilda is forced to remain: pretending to have had a heart attack while swimming in front of the house of Raybourne, and that one who was also at sea by accident (Abe Boom) managed to save it. The Raybourne are a powerful dynasty, and the old Raybourne Rufus, even in spite of the collapse of part of his empire because of a housing development busted, however, is still firmly in place. Lake, helped, is greeted in the house, including the looks concerned and suspicious if not suspicious of the others present: Maurine, the young wife of the old Rufus; Mrs Farley and Rae Amerton, a couple of psychics friends; the daughter Inez with Dr. Pageot her boyfriend; and finally the Chinese butler, Fong Woo.

However Lake should reveal who is, when someone kills Theodore Raybourne with a heavy poker: the reason is that after Wong Foo, down, gave the alarm, and Lake entered the chamber of Raybourne finding his smashed skull, there next  is Hilda Lane that holds newspaper clippings, the compromising papers that held the victim, and now is trying to destroy in a fire. After a fierce fight, she manages to knock the detective and destroy compromising papers. But he, who is bound by an employment relationship with the lovely Lane, must now save her  from imputation of murder, thing he does immediately , trying to dismantle her presence there in that room, in front of the old Rufus, succeeding in part: now, dispel all doubt has to find the real murderer.
He must first identify the fingerprints found on the heavy poker: the old Rufus is well convinced that whatever is the murderer, the death of his son should be avenged, handing the murderer to justice. Even if it would cost the indictment to one of the family members or the present.
All they have to make available their fingerprints, and so, in the end, the fingerprints are compared. Twist, when, however, after that they are not assigned to any of those present in the house (and then even to Hilda), they are from  John Royal, companion of adventures and speculations of the old Raybourne, who nevertheless exaggerated with embezzlement, ending at San Quentin! Is it possible he escaped from prison and now wants revenge on the friend who accused him in court? No, because Royal died a year before and the very old Rufus oversaw that body, embalmed, was buried. Then how do you explain those footprints?
The deputy sheriff Catalin, the grocer that the community of those parties elected to do the sheriff who does not know how to move, is Lenny McManus, an acquaintance of Lake, who for many years has been the deputy sheriff. Just Lenny, Stanton and the beautiful Hilda one night armed with shovels, go to disinter the coffin of Royal to make sure if s him; but, arrived on the spot, after digging, they discover that the coffin was desecrated and the corpse is gone.
Is possible that John Royal is alive and that the corpse belonged to someone, taking and giving his identity? It would be possible, but clashes with the Lake’s conviction that murderer is someone instead of the house: in fact, when Theodor was killed were all at home and very high would be the possibility that a stranger was discovered. How did it Royal?
Now you correlate with the disappearance of the prisoner, the aggression suffered by Lake previously: someone attacked him in the library and then if you snuck out. It is discovered a secret hideaway, hidden in the wall, used in the past as the armory, that friends of Rufus knew, including Royal. Is it possible that after the murder, he has hidden himself  there and only after he escaped?
However soon the self-styled John Royal is reappeared. In fact, Stanton Lake, having no response from the beautiful Maurine, closed room, not down to breakfast, with the cooperation of other, breaks down the door of her bedroom and is prone on the bed, her face bluish and one of her stockings knotted at his neck so closely for almost not to see that his node, in the flesh swollen. The strange thing is, however, that the bedroom does not have other outlets that the door closed from the rear, and the window, well locked from the inside: how did the murderer to go out?
Stanton Lake manages to find a trapdoor in the closet of clothes, wondering what it is doing there a chair: Lenny hoisted, without touching the panel, and penetrated into the attic, he soon found another hatch, dropping in the room of Dr. Pageot: is possible that the boyfriend of the daughter of Raybourne killed Maurine? And why? Soon he  discovers that the two had an affair, lived a story of sex: in fact the beautiful Maurine was found wearing the negligee more transparent than all the transparent negligees. She was probably waiting for her lover, who in fact admits to be gone, but only to find her dead.
Lake, by the idea he has made, he tends to give credit to the confession by Pageot, nothing but a bleak fortune hunter: however, without finding the way how the murderer has gone out, he couldn’t  show the strangeness of  the adventurer.
Meanwhile, after an embalmed corpse was found in the sea, half eaten by shellfish, and after that Abe was sent from Lake to obtain the dental board to ensure that that body is or is not by Royal, a third murder occurs at that dwelling: is found murdered, with a dagger driven into the heart, the old Raybourne. And once again, Lake will face the shadow by John Royal, because once again his fingerprints are found on the handle of the dagger.
But who is John Royal? And  is he dead or alive? And if he's dead, how can be there those footprints , on the knife and on the  heavy poker?
Lake will solve the mystery and he will exonerate Pageot and Hilda Lane, meanwhile fallen in love with the investigator.
Memorable final: Hilda begs him not to leave her, but Stanton who also knows he is weak against her, does not want to lose his subjectivity and become only "the husband of Hilda Lane".


And for this he gets out, and goes to the train, without looking behind.

Beautiful novel, retains a voltage unchanged throughout its duration, which is kept very high, thanks to a plot extremely crackling and never dull: a lot  of events disrupt the investigation and until the end you can not figure out who would be the killer, if John Royal or another, and then how his fingerprints are finished both on heavy poker and on the handle of the dagger.
Nice also the Locked Room, whose solution although a change of method already discovered by Carr, is nevertheless very intriguing for the fact that to discover it, you have to look from the outside and not from within, and from outside is not easy do it, because you're out of a window without a balcony, high at least six meters from the boulevard below.
The investigator could be a clone of Sam Spade: hard, sometimes even contemptuous, that uses the hard way, for example by crushing Pageot to induce him to talk about after the death of Maurine; weak with women, but at the same time proud of his individuality ; and Hilda Lane, is the so-called “Femme Fatale”, ready to lose the head to a man, but also to lose her when he instead ardently desire her, rejects her; and Inez Raybourne, the heiress, is the so-called “helpless woman” prey of attention of people attracted by her money, which simulates being in love with her but then instead has a history of sex with the girl's stepmother.

The Chinese butler is a classic, as a classic is also the replacement of one body with another (had not for the first time experienced it Edmond Dantes by Dumas?).


And even the elderly husband, betrayed by his wife having sex with another young, which in turn betrays his girlfriend very sensitive; and also the fake mediums, which ensnares the gullible.
The corpse that disappears, may have also influenced the Latimer of The Lady in the Morgue (1936), ie a year later than the novel by Chambers), and No Coffin for the Corpse by Clayton Rawson (the disinterment). But in turn it could have taken something, perhaps, from The Greek Coffin Mystery  by Ellery Queen (1934) in which is unearthed a coffin in which there should be a body embalmed; or from Into Thin Air (1929) by Horatio Winslow and Leslie W. Quirk, in which is unearthed a body to see if there is or not an object.
In short, a great novel, which you read passionately.