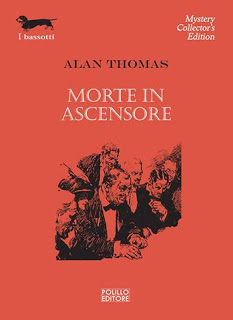 That The Death of Laurence Vining Alan Thomas is a masterpiece of the genre "Locked Room", it is an indubitable fact. However, it is structured in a unique way, and for this I want to analyze it in its entirety.
First, we look at how the various novels written by Thomas (born in 1896 and died in 1970), this, his first feature, is considered the best among all: Thomas began with a bang, but then, as often happens, it could not be repeated with his other works. Among these fifteen others, as stated in the notes in the flap of the novel, "only eight can be considered real mysteries, while the others have a mystery implication only marginal." The account seems to me very important because I will use this statement to explain my point of view about it. In fact, in my opinion, absurd as it may seem, this novel could be part of those in which the mystery implication has a marginal importance: in fact it seems to me that Alan Thomas, when he wrote the story, interested more writing a fictional story than a true crime novel. In this there is no doubt that there is a profound difference between a novel by Agatha Christie, and John Dickson Carr and one, in this case, of Alan Thomas. While in the early the mystery texture takes the whole book and the rest of the coins, in Thomas is the opposite seems to me: basically the plot of mystery in itself, its presentation and solution, occupies the two extreme parts, while in the middle space is the part of the fictional text, in which Thomas is to get carried away from wanting to tell, from the show that he  knows narrate. Oh, not that he does not concern the plot, but however the substance is not treated with the same force and tension of the opposing sides and extreme!
Then we let's better understand what it's about.
WARNING: SPOILERS !!!
Lawrence Vining is an amateur detective who has helped on various occasions Scotland Yard to extricate themselves in cases of special mangy, and therefore has a prominent reputation. However, outside of his superior instincts turned to pure deduction and problem solving more complex, Lawrence Vinig is a ruthless man, ambitious, without moralizing, which operates as a function not of the common good but of self-interest: as well as he deliveries to executioner John Plunket, accused of killing a businessman during a robbery, crushing him in a series of accusations and suspicions, which will be followed in manufactured artfully, but not true in an absolute sense. What matters is having identified a possible culprit, not that it was the only effective. He will leave to mourn the sons who will hate from that moment the first father’s executioner. 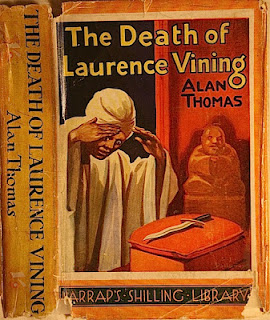 Lawrence, however, is not alone, but was helped in the investigation by his assistant, Dr. Benjamin Willing; indeed these, collected clues that allowed the "great man" to analyze them and come through them to incrimination of the suspect. Willing is the shoulder of Vining, it can be said, in a sensible comparison, which for him is like the Watson of Sherlock Holmes.
Vining has an adopted son, Jack Ransome, and wants he becomes a surgeon; but that instead is more inclined to horses and women, rather than books, and so between the two is not good blood flow, until Vining, knew the intention of the adopted son to marry his secretary, Pamela, claims to want to disinherit. At this point enters a friend of Vining, Colonel Robinson, who takes the side of the adopted son of Vining, however, unable to change his mind friend. You will see later in the story is the same as both Jack Robinson had good reason to hate Vining, and not necessarily the same.
In short, Vining, is not that it is loved by all. And so it happens that someone wishes to eliminate him. And he does it with a very spectacular crime: Vining takes the elevator Metro Hyde Park, to reach the train, but if when he enters into the elevator, he is live, where he is completely alone, when it gets to destination and opens, Vining collapses face down dead with a dagger driven into the shoulder in the cab, there is no one besides him. Who could ever have been and how particularly did he manage? 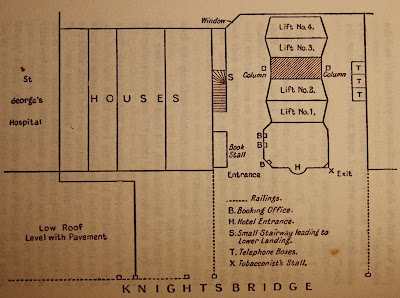 In short, another milestone of the "Locked Room" and a novel that is impossible the lover of the genre do not read, at which a lot of things happen (of which I didn’t speak about) and at which, though the tension is palpable at beginning and end, and less in the middle of the novel, however, the narrative relaxes and is easier to read. If anything can turn up their noses to certain readers, the fact that out of the blue, after the impossible crime was presented at the beginning and then in the course of the narrative, nothing has emerged nor has said, in final  it is revealed in great detail. Certain readers bothered Thoman was not completely honest with them, accustomed to the fair play by Carr. But do not correct improper comparisons especially among the weakest:  if Thomas had spoken about the details mentioned by the epilogue, first, surely many more readers than those who are surprised by the final revelation, would arrive long before the identification of the culprit. Essentially then Thomas resorts to the old expedient of lengthening the broth and add a bit of smoke and mirrors, justifying it with the desire, by the inspector Widgeon, reaching the indictment of the culprit away from starting and following a roundabout way, with the continuous interrogation of the other actors in the drama, hoping the real murderer betrays himself. Which it does not happen, and justifies the final revelation of the killer post mortem. Especially the thing that makes perplexing is the fact that Thomas is silent at the beginning and at the end proves to be only a very important detail: that the trains at that station not only pass to the upper level but also the lower one. And so the scale is not only useful to those who have to go to the toilet, but especially useful to those who, not wanting to take the elevator, should take a train passing on the tracks on the floor below.
The rest is to be virtuous of the detective novel, hold the attention of readers and voltage, focusing on a single criminal act; that's because many great authors, when repackage books of a number of pages, to keep fixed the perception of tension, insert multiple crimes in the same novel.
One last note: the Inspector Widgeon, having appeared at this novel, will reappear in another novel by Alan Thomas, Death of the Home Secretary (1933).