Recently came out in italian bookstores, signed by Hillary Waugh, "Dormi bene amore mio", Sleep Long My Love, 1959, in the series of Polillo Publisher.
Who was Hillary Waugh?
Hillary Baldwin Waugh was called and he was born in 1920 in New Haven, Connecticut. He graduated in 1942 from Yale University, and then he enlisted in the Air Force USAF: just as he lent military service, he thought of writing a novel, his first, Madame Will Not Dine Tonight in 1947. After having published two more novels without much success, in 1949 he turned his attention from the Mystery enigma - genre that had raged in the thirties and early forties – to the so-called "Procedural", a novel in which the survey is conducted by a police , following tracks, interviews, formulating hypotheses, abandoning them, etc. .. until you find the culprit. His first novel, the change was the dazzling Last Seen Wearing ... which was published in 1952, followed by many others. 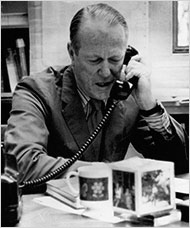 Waugh, also named Grand Master by the Mystery Writers of America, has died at age 88, in 2008.


Sleep Long My Love is a black novel , but most black that you can not.
Even here the characteristic of Waugh emerges forcefully: a beginning of the novel absolutely surprising, as well as the final unsettling were the characteristic of Brown. But I'm not talking about the Prologue, but just the beginning of the novel.
In the Prologue there is a dialogue between a man and a woman, two lovers. He is tired of her, but she haunts him, begged him, and finally threatening him with the story that she is pregnant by him. A threat as old as the world, for a married man who lives an extramarital affair only as carnal fun without wanting to break up with his first wife, becomes the motive for murder.
So far nothing special. It’s the beginning of the novel instead that  is unsettling!  Mr. Watly, an employee of a real estate company that rents houses, finds broken the glasses of his office. He Suspects a theft but he can not find anything that was stolen, except ... of leases from the archives?
One steals money, shares, securities,  jewelry, but never you heard that someone has stolen rental contracts. Yet it is so.  But Fred Fellows, police chief at Stockfords, does not think so. It begins to dig, to analyze all the rents and eventually focuses on short-term contracts. Restlin, the owner of the estate agency speaks about a certain Campbell who had rented a nice big house for a month, and would be available soon; Watly only that you had taken the day before a buyer, Brunnell, but had found the house deserted and the door closed.
Fellows and his sergeant Sidney Wilks go with other agents, and immediately feel a strange odor that can not identify. The house is uninhabited, clean and put in order. Nothing strange, except two suitcases with two gold initials "JS" in the entrance, almost forgotten.
Bare rooms, clean bathrooms but one with the foam in the bottom of the tank, and a freezing cold inside the house. You die from the cold, and already it is in February, February 26. But for most of the heating is off. Restlin launches desperate in the basement where there’s the boiler and you can hear his cries: someone has left turn off the boiler, not shutting off the water meter and so the pipes have frozen and they have erupted.
Fellows enter into all the rooms and finds nothing, absolutely nothing. Then he goes down to the cellar. But why in the basement? Yes, because in the cellars of the abandoned houses are hidden secrets. I remember the good Carr (he intended about Gothic literature), in It Walks By Night, in a wall of the cellar it had been hiding a decomposing body. No, here. decomposing bodies hidden in walled niches there are none. But there is a trunk. Other topos of the novels blacks. When you find a chest, you can be sure that inside there is always something interesting: Agatha Christie reveals a rotting corpse in a trunk, in One, Two, Buckle My Shoe; Alfred Hitchcock conceals one inside a chest and then over there prepares the table for a cocktail party in Rope; Michael Gilbert hides a decomposing body in a trunk, in his masterpiece, Smallbone Deceased; even the French writer Pierre MacOrlan (one of the pseudonyms of the great Pierre Dumarchey, author of the ever remembered enough Quai des Brumes, the novel from which Marcel Carné drew the eponymous film masterpiece with Jean Gabin and Michèle Morgan) in Le tueur numéro deux hides a corpse in a trunk; and even “The Jackal” at Forsyth's novel, when he kills the forger of passports that wants to extort more money by threatening to reveal to those who have provided them, he hides the body in a chest.
Do you want to see that in the chest, in the basement of the abandoned house, there is a corpse?
Initially clothes, shoes, but then find a trunk of a body who has been partially preserved from the cold by the decomposition, from which lack the upper and lower limbs and the head. Where will the killer have hidden them ever ?
Since at the boiler they find are a strange ash, not charcoal, it is assumed now that it is the missing part of the body. As you can never identify the body?