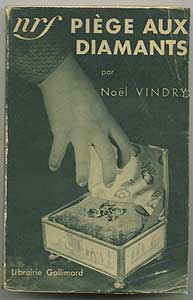 In 1941, Agatha Christie will give to the story a novel that will be remembered  and will affect all the gender: Evil Under The Sun. Do you remember the trick of the novel? Well, I think the basic idea is brought forward in this, neither more nor less. Possible that Christie has adapted the idea by Vindry, modifying her plot? Very possible, I would say, i.e. strangely also that from a novel by Steeman, Six hommes morts,  finds itself in her masterpiece, Ten Little Niggers, and in that by Bristow & Manning, The Invisible Host.
In my opinion we should analyze the work of Christie in light of the influence by the French novel. No coincidence that she recognized the enormous influence that gave to her ambition to write novels, Le mystère de la chambre jaune  by Gaston Leroux. In fact, the ascertainment of death in the novel by Agatha Christie leads to a series of consequences, because death has not yet occurred; while in the novel by Vindry the death occurred, but the finding of it, it is carried out with a different procedure consequential. However, the basic idea is the same: a false assessment carried out on a dead body and  that does the investigating person when he dismissed the present.
And Vindry? Undoubtedly already in this novel we find a theme hewill use in one of his later masterpieces, La Bête hurlante: the fact that the house is surrounded by a cordon of police determines that it is impossible that the murderer was able to escape. But we also find features related to other French novelists of the period: the fact that the center of the plot there is not a psychological characterization of the characters but the enigma: it’s the enigma, the center of everything, around which moves the story. In  itself the psychological characterization is almost nothing and also the smallness of the actors of plot makes the action focuses exclusively on the history, a procedure which is also shown by Boileau. It 's obvious that Vindry is raised in a manner antithetical to Simenon, for which,  instead, the enigma is not the focus of the story but only one piece, and the center of everything instead is the psychology of the characters.

For the specialist in crime fiction Roland Lacourbe, Vindry is the French equivalent of John Dickson Carr. 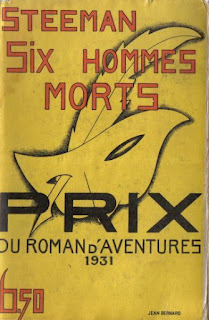 I think otherwise. In my opinion, Vindry more than to be the equivalent of John Dickson Carr, he is the equivalent of  Clayton Rawson. As Clayton Rawson in the atmosphere is not the best, so it happens in the novels by Vindry, where yet the quality of the plot and the solution are of the highest quality, of extreme virtuosity. Almost more than in Carr, as happens for example in my opinion in the novels by Rawson.
If Vindry is close to Carr, his character Mr. Allou is close above to  Bencolin and this can be inferred from a fact: Vindry began writing in 1931, while the first novel of Carr is from 1930 In both, the protagonist is a judge, even more juge d 'instruction: he solves the mystery. The first Bencolin’s adventures among which, the first novel,  are Locked Rooms[1]: by which cases does Allou occupe?  Locked rooms. Vindry is cloose to Carr and Rawson also for another matter:  to arrive to a solution, they (but also Boileau) reverse the situation and the thinking. Gideon Fell, Merlini and Allou have the ability to break away from the real world and look at the sequence of events as if their spirit had soared astrally, breaking away from the materiality of earthly events.
However, when this reversal of perspective happens, it also increases the virtuosity of the investigation. In the moment in which Allou takes into account a different solution, it doesn’t happen that the effects are more linear but the opposite. So in his investigation to prove incontrovertibly a certain fact and arrive at a plausible solution, instead of simplifying things, they tend to become more complex. It follows that the reasoning to solve all should be of the highest quality.
I also get a quote from Chesterton, in the novel of Vindry. In fact, the letter in which Paul accuse himself of being the murderer of his brother is actually a fragment of a longer letter, properly cut, as in The Wrong Shape, at The Innocence Of Father Brown by Gilbert Chesterton.

We must say, however, that Vindry, unlike Agatha Christie and once again as Carr and Rawson, he does not cheat in anything the reader: the framework of the facts is absolutely what is before the eyes de judge, what changes is the perspective from which he is looking at the problem and the ability to imagine, moving away from the real.
And in some ways Vindry, realizes something of his own, a feature very personal, in his to make difficult the easy thing: unlike all the common detectives who seek in every way to simplify the sequence of events, reducing the factors to a minimum, Vindry realizes an absurdum: explain the unexplainable, making it even more abstruse and denser of recondite implications, and at the same time explaining and giving to the whole,  a meaning.