About Hillary Waugh I have already spoken on the occasion of the excellent novel republished by Polillo Publisher.
Waugh began, however, as I have already said, with three novels in the classical tradition of Mystery Enigma. It was the first ever written: Madame Will Not Dine Tonight ,1947.
Sheridan Wesley was invited to the home of Valerie King for a dinner. Nothing strange if Valerie King was his acquaintance , but it is not. The invitation is also more strange because to Sheridan, who is a private investigator, was delivered an envelope with an invitation, in which was a hundred-dollar bill and also the demand to bring with him to dinner, an escort: in his case, his wife.
The invitation, which is already strange in itself, acquires even greater significance when the two arrive at the home of Valerie and do not find her waiting for them; instead found a strange company of people: Jimmy Burns, a tabloid journalist; Charley Cromwell, a playboy; James Godfrey, a lawyer; Gloria Van Ryne, a beautiful girl from a good family; the Hammitt spouses. The group of individuals gathered there is all the more strange because they do not know each other- and could even happen that into a party people do not know - but even more strange is when it is clear to Wesley and his wife, that some of them say they had never known before the King: for example spouses Hammitt, Burns and Gloria Van Ryne.
Meanwhile, everyone is waiting for Valerie, but  seems his guests wait her. Sheridan begins to ask questions: the household, the Webbs, say Valerie went to town the day before and  when they are returned at ten o'clock in the morning, already she was not in the house, but she had announced the day before that they would prepare the house for an evening reception, when they would return. And they had done what she  had ordered. However, this revelation seems to be in contrast with what Wesley has discovered: Diana's car is still in the garage. She could not  go to the town from a villa in the countryside without a car! Wesley begins to smell a rat: if at the house she does not seem to be , somewhere else she will stand. Around the villa there is a grove: although it is night, it’s cold and they are dressed in evening gowns, Wesley and Diana walk, illuminating the ground with a flashlight that he always brings in the car. The fact is that after theyhave found on a stretch of land, footprints women's heels, and then a female high-heeled shoe, they find Valerie naked, stabbed and dead , at least since one day.
They return to the villa and they call the police. 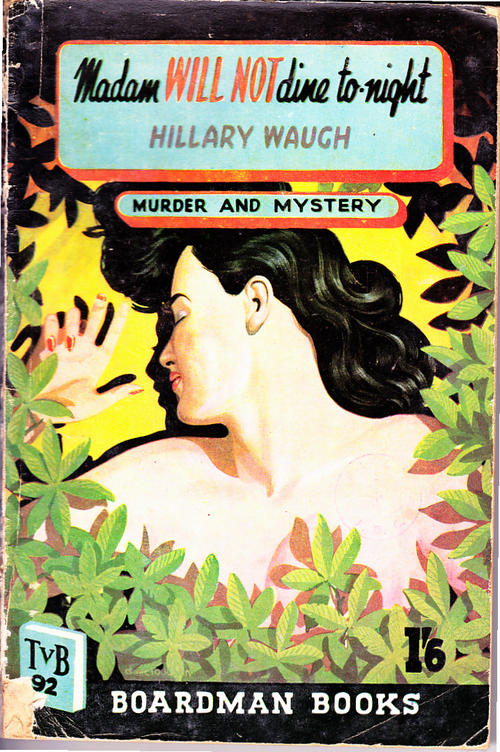 The surveys are entrusted to Captain Slocum, who initially distrusts Wesley, thinking abouta red herring, then he gives him credit for (while distrusting him) when he knows that Wesley and the Inspector-in-chief Bradley, of the Homicide Squad of the Police New York, are good friends. As Slocum did stalk Wesley, he  instead of supporting the survey, investigates on his own: first at the opening of the Valerie’s safe , he subtracts from it, a photo among the documents Slocum gave him, an old photo; then in his absence, raids deeper  the study, where he found, communicating by phone to the police about the death of Valerie, tobacco scattered on the carpet and two tins of cigarettes (colored red and green) with the plugs reversed that he had put in place: pondering about the assumption that the spouses Webber and in particular the woman claimed to have thoroughly cleaned the house on Thursday morning before leaving, he concludes that tobacco had to be dropped after, as during a lite, when the jars were opened and the cigarettes were  finished on the carpet. By removing the tobacco, he realizes that there are spots on the carpet flattened, as if for the time it had been leaning over something heavy that he hypothesizes were the legs of the desk; aligning these to the legs of the desk, he realizes the areas of the carpet covered temporarily by the legs have spots, presumably of blood: understanding that is the location where Valerie was killed, he knocks on the walls to try hypothetical secret drawers and finds instead, behind a reproduction of a Corot, the bullet of a .38 impacted behind, that he removes and takes.
After clearing the room, he goes to deliver the bullet to his friend policeman for ballistics, just to know that it comes from the gun of a notorious gangster finished long before the electric chair. Also, doing a search on the newspaper years ago, he dates back to the people portrayed in the photo he has taken away. They are two robbers, Lenny Myers and Joe Freeman: the first, that had a younger sister, Virginia Myers, was executed on electric chair for a murder during a rapine; the second, has escaped from prison and about it, it has not heard anything; Virginia Myers later had changed the name in Valerie King. Along with other clues, including cards and letters kept in the safe, it takes out another portrait of Valerie, not simple wife, betrayed by a husband who solaced with four lovers, who lives with the heritage derived from the divorce from her ex-husband, but blackmailer patented, which blackmailed Cromwell, his former lover, but also probably the lawyer Godfrey, his lawyer in the divorce proceedings; and probably also the former husband. It’s possible she also blackmailed the spouses Hammitt? Freeman at the old photo, older, could be similar to Hammitt? Wesley understand Hammitt is  an escaped convict, who later made ​​a fortune in the industry. Who will never be the murderer? What’s the value of the discovery made by Wesley, together with the discovery of blood stains on the carpet of the study, about  a fragment of a diopter lens?
Madame Will Not Dine Tonight, which was written while Waugh was still in the army, was not very successful. Why ? Probably because it did not create anything new. It would have fascinated unless he repeated some elements of novels published previously: this is the limit of the novel. It 'an honest product, very cleverly written, that mixes the Hard Boiled (the stalking, assault in the night club with fistfight , which hints at many other similar ones, in particular, contained in Headed for a Hearse by Jonathan Latimer: the femme fatale, as opposed to his wife, who wants to get with the sex the fixed result and when she doesn’t get it, she produces in a waft of obscenities longshoreman) with the deductive Mystery (the blood on the carpet, which mocks a novel by Ellery Queen, The Egyptian Cross Mystery, the diopter lens route and the exchange of cigarette boxes, clues linked to color blindness, which makes the verse to another novel by Ellery Queen, The Greek Coffin Mystery, and always to this novel by Ellery Queen it may refer Waugh, with regard to the artistic side of Godfrey, since as in the novel by Queen there’s the painter's forger Grimshaw, here is the lawyer Godfrey who is also an accomplished artist; the blackmail, theme already deepened in many other novels; and also in several previous novels, there is the indication of the false footprint  to sidetrack the investigation) according to a specified path already own by Jonathan Latimer or Craig Rice.
Then Waugh adds very personal themes, which are obtained associating once again, as so often happens in the first few novels by a particular author, the own personal story to that of his hero. It is no coincidence, for example, the wife of Wesley, is called Diana, as the wife of Hillary Waugh, and the lawyer Godfrey dabbles in prints being an accomplished artist, as the same Hillary Waugh was designer.
A novel, however, we read in one breath, supported by excellent dialogues. However, the offender can be easily identified on the basis of the projectile analyzed, a long time ago.
In practice, there is no surprise in the final (we speak of course about the novel read by avid readers), because the offender can not be that one person!