Anthony Abbot: About the Murder of Geraldine Foster, 1930 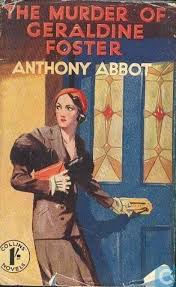 Beyond this, the Abbot of propensity to use often in his novels, scientific wizardry is the daughter of his time and is derived from the use which had made such authors as Cleveland L. Moffett, Crofts, Freeman or Connington; in several of his novels, the victims are women, but he is not a writer of the old school, which tends to eliminate "the fairer sex" as a suspect; his novels are typical Procedurals, where investigations are not carried out by a detective, but by the police.
What is peculiar, however, to the highest degree, in this novel, is that of a single crime is based around the castle for clues and evidence: he has no need of another crime to revitalize the attention and the voltage of the reader. Abbot does not hide nor even silent certain truths, then turned out  be important: the solution agrees with all the questions in the course of the novel. Abbot, in a way anticipates Carr and Rawson, diverting the reader's attention from the right direction and turning it in the wrong direction.
It is also to say the same quality as the investigation is of a type vandinian: Colt combines quality survey acutely psychological to techniques of examination purely circumstantial, type sherlockian: so for example explains why the body of Geraldine was completely naked after the child claims to have seen a ghost in the house of a woman covered in blood and naked and after finding fibers woven into the wounds.
The novel also lends itself to another kind of criticism, social criticism:
vandinian detectives are inherently leaders dell'intelleghentia Haute Bourgeoisie, and all the stories in which they are engaged, concerning crimes that accrue only in the most exclusive of the great metropolis, as if the murder more convoluted and more complex could not reside in degraded environment and low class, but instead in a very high.
In this novel, there is a number of examples of this: the High Commissioner is responsible for a crime that involves one of the most well-known professionals in the city, whose brother and sister in law are also among the most brilliant lawyers New York hole. One would expect, therefore, that Abbot parses the most peculiar aspects of this social area. Instead, he shows great disenchantment with the daily life and expectations of small and medium bourgeoisie, dreams shattered by the Great Depression of 1929 and the illusions of social redemption through unexpected inheritance or noble origins. The size of the fiction writer, in my opinion, is better represented than anything else, from the description of a detail of the corpse: "the diamond in an engagement ring around a little finger”. At the horror of the mutilated and buried human remains, what does the ring mean ? At least two things: the wickedness of someone who has denied a dream come true to a girl; the indifference of murderer for that object.
The indifference of the ring with a diamond could mean that social extraction by the murderer or murderess was greater than that of Geraldine Foster, and it means for that a small diamond ring of the type engagement represented a little thing. For this reason, it may have been scorned and left in the bare earth. Instead, if the murderer had been at the same or lower class than the girl , perhaps the value of the diamond would have taken on his/her greed.
The novel, as we see, is a real beauty: an unforgettable novel in its dramatic force, the fine texture of the plot, in the evocative power of writing, in the versatility of the situations, in the multiplicity of false trails that lead the reader to follow of the prerequisites whereas investigative action is directed towards another.
In this way, the ending is fantastic, by rare beauty: it is expected that the murderer is X and instead is Y.