Fredric Brown : Death Has Many Doors 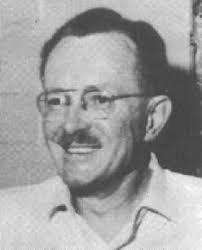 Fredric Brown, was born in Cincinnati, October 29, 1906. As a young man, he held various jobs, working in an amusement park (in fact one of his most famous novels, The Deep End, it is set in such a place), before finding a job as a proofreader, after he had entered the university without graduating. Published some short stories in pulp magazines and in 1947 he attempted the paper of the novel, writing The Fabulous Clipjoint: the novel, rejected by many publishers, it was eventually published by Dutton, winning the year after, the coveted Edgar Allan Poe Award for outstanding first mystery novel. Since then he began to also publish novels Fiction, as What Mad Universe or Martians, Go Home.
He died in 1972.
Brown was one of the greatest writers of Mystery and Science Fiction: his plots are full of inventions, and the finals are always of great workmanship.
In the field of mystery, Brown wrote several novels, some of which with the pair Ed Hunter and his uncle Ambrose, star of the hit novel, The Fabulous Clipjoint: for many years considered a minor novel in the bibliography of the author, it was only few years ago revalued, becoming one of the great crime novels of the twentieth century, and putting its author alongside other more celebrated as Jim Thompson, Dashiell Hammett, Ross MacDonald.

Fifth novel with Ed and Am Hunter, Death Has Many Doors (1951), is one of those novels that may well frame the multifaceted personality of Brown.
The novel tells of a pair of detectives, uncle and nephew, employed by a client at least strange, Sally Doerr, a shorthand typist, who, convinced of the existence of aliens, states that they, hidden in disguise human, they want to kill her. The two investigators make every effort to dissuade his commitment to making investigators, because, honest to the core, they think that the girl is a little unscrewed, and therefore does not intend to take advantage of her, nor would like to see other people as less scrupulous of them, I took advantage. However, if only to reassure the girl, Ed Hunter promises that he will watch over her, and, accompanying her at home, will stand near. Winning attraction rather than legitimate, since the girl is very beautiful, and she would to fuck with him (because she thinks  would be better protected so), and he wanted to be as professional as possible, Ed sits on the couch while her, completely naked, sits on the bed, the bedroom door ajar, so that at any time he can run. The fact is that Hunter falls asleep, waking up at two o'clock, when the phone ringing the alarm: he answers, but has no answer. However, still seeing the light on in her room, he goes to see, realizing that the girl, naked on the bed, inexplicably died. There are no marks on her body or injuries that may suggest a murder. However, the girl was found with his arm in a strange position as if she was taking a book, including those posed close to the bed.
Ed calls his friend, Homicide Bureau Captain Frank Bassett, with whom he has already worked a few times, and tells him about the events. The police visits, the corpse is taken away and autopsied, reveals that, in case there was still some suspicion that the girl died of a heart attack: she was suffering from heart and then, probably for the stress derived from its fears she wad dead.
Case closed. Or rather, no. Because he has some suspicion about it, or rather he wants to remove all possible stones, before they ended the matter, especially since she died while he was in the next room. And, because of this thing, he asks relatives. He can not find any possible motive that could justify the murder of the girl. She and her sister belong to a family of modest conditions: orphan son was bred by Gerard and Eve Stanton. Her uncle lives in the house, Ray Wernecke, which exceeds with alcohol and the stories of Martians: he communicated to the niece these absurd fears.
The fact that she was sleeping naked, poses no possible reason to investigate Ed, especially as he turns out, interviewing family members, as this was a habit of the girl. And the parents and relatives of the girl, recognize as Ed and his uncle behaved more honestly that against her. When it appears that you could put a lid on it, a mysterious phone call get the two investigators: the girl was murdered. The mysterious caller qualifies as a Martian eager to prove perfect strangeness of extraterrestrials in the affair. He makes sure that the two discover, in their study, their reward: a thousand-dollar banknote. 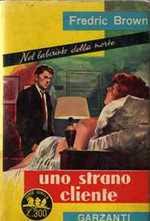 At this point the two on the basis of the pharaonic remuneration, they decide to take an excellent typist, Monica Wright, who will fill the post left vacant by Sally farm where she worked (and they will pay the difference in more about his paycheck ) to find out there, talking with her colleagues. And both Ed and his uncle, the first will discuss again with the Captain of Homicide Bureau, and then with a series of people, work and family entourage thereof. And in particular, Ed knows Sally's sister, Dorothy, a beautiful girl. Ed and Dorothy will fall in love. The strange thing that happens then is that this girl believes she can die like her sister, and who killed Sally could kill her too.
At this point, the two investigators, discuss with each other: Ed would not deal with the matter, but his uncle convinced him instead to deal with, not least to prevent another murder may be repeated, if absurd that the fears were well founded . Ambrose convinces his nephew to go with Dorothy, and spend the night with her in a secret and do not disclose to anyone where they are. Nevertheless, at night, while Dorothy and Ed, naked, are bathing in the lake, she dies.
There is no one beyond him, and that there was no one else around, attest the Auslander, a family living in a house on the lake. They were at the scene, they saved Ed, and they swore to the police as he was alien to the girl's death. However, do not tell, for decency and not to harm it, that he was naked, and when he found the girl, they bathe her clothes in the lake and wear her so that no one could imagine that Ed and Dorothy were both naked before.
Also this time, it may seem absurd to the matter, it would seem that the girl died of natural causes, an accident. And once again, the Stanton and Wernecke, destroyed by adverse situations, do not impute anything to Ed for girl's death.
However, Ed and Uncle investigate, and do not give up in front of the simpler explanations. And although the types that surround them seem harmless, among them discover the killer, who kills using sneaky scientific knowledge notch. And he will find out after even thought that he may be dropped from some balcony above and he was able to enter through the open window, but Ed then will reject this possibility after a complex series of conjectures, he will identify the weapon and the motive more oldest in the world: money. But, the two sisters were not poor?  And two adoptive parents didn’t pay the university to Dorothy ? The fact is that things are never as they seem. And it shows the final, ending, totally unexpected, in the wake of the many designed by Brown.
The novel is, among other things written in a style that captivates and much fascinating light and fluffy, the novel could be said to be a handled mystery. Nevertheless, it is written with great intelligence and is necessary for two impossible crimes. The beauty is that, unlike what normally happens, the inability of the two crimes is only assumed for the entire novel and confirmed only in the final pages, where it is explained in the light of the identification of the weapon (that would make the happiness of John Rhode) and the motive. Which in turn, as the two weapons used to kill the two girls brings back to the Cold War atmosphere that it was breathed in years when Fredric Brown delivered his audience his best work, and to secret weapons and to not secret weapons used at those years.