Among all the novels of Ellery Queen, The Egyptian Cross Mystery is not a reading relaxing and free from strong scenes (as was the habit of english detection), but instead a deafening roar of death, blood and wickedness.
This mystery was the first that I've read: I found out to my aunt's house, on a shelf in the library. I was fifteen. Won me over immediately. I read and reread. A total of 4 times.
And every time that I've read has caused different sensations.
The novel is one of the bloodiest of the entire production, with three brutal murders: the beheadings of three brothers. It certainly had to have a precise position in the queenian literary production, if it is true that you can associate ideally it with two other novels of the period of Queen (The Tragedy of X and The Siamese Twin Mystery) by virtue of a particular common: all three novels develop in a particular moment of their plot, the property has diabetes to cause rigor mortis earlier than normal.
The novel starts with the "crucifixion of a school teacher" Andrew Van, however, devoid of head, symbolizing a monstrous Egyptian Tau, on a pole indicator to a crossroads in the city of Arroyo: is Christmas morning.
Continues with the "crucifixion of a Millionaire": Brad Thomas, owner of Bradwood, "famous importer of carpets", beheaded, tied to a totem, the figure sadly recalling an Egyptian Tau.
And it ends with the death of Stephen Megara, to the mast of his boat, still without a head.
A story in which the blood flows freely: not only the blood of the three bodies outraged, but what sold away. In fact, it would seem that at some point the brutal murder of three men, three brothers, fled to America to disappear from the face of the earth, not to be reduced to nothing more than a tribal vendetta, a blood feud between two clans, the Krosac’s clan and the Tvar’s clan in Montenegro: in fact, it turns out in the end, is much more than that. And in a sense, the horror of the dramatic situation, is higher than that resulting from the completion of a vendetta distant geographically and temporally. Three men to escape and change his identity had chosen to claim a fictitious original nationality: Andrew Van, the Armenian; Brad Thomas, the Romanian; Stephen Megara, the Greek, changing theirs names at the original three respective cities: Van in Armenia, Brad in Romania, Megara in Greece.

There were three brothers who wanted desperately to leave behind a sad past and look in America hopes immutable, new ideas of life: they will find a sad fate, pursued by a murderess who comes from afar. But, then, is all this really true?
And that monstrous “T”, formed by the arms outstretched linked or crucified, of a human body of missing head, suggest during the novel multiple interpretations: first, the Egyptian Tau, which will reconnect other suggestive theories. It must be said that the same Egyptian reference is a very precise linking together several writers having in S.S. Van Dine their prophet. In fact, from The Scarab Murder Case by S.S. Van Dine (1930), other novels derive their plot, referring variously to Egyptian civilization: The Egyptian Cross Mystery by Ellery Queen (1932), Arrogant Alibi (1938) by Charles Daly King, even The Man from Tibet (1938) by Clyde B. Clason in Tibet, that reads a story that comes verbatim from the novel by Van Dine. Do not forget that at the very beginning of the last century are ascribed important archaeological discoveries in Egypt (for example, the discovery of the tomb of Tut-Ank-Amon), the immediate media coverage both in Europe and in America, and that their European and American archaeologists were engaged in those years in Egypt and the Middle East.
And let's not forget either, that before Van Dine thought to set one of the adventures of Philo Vance in a museum of Egyptology, he had already thought Richard Austin Freeman to conceive a novel in which for various reasons was talk of Egypt: The Eye of Osiris (1911). And the rest of the way as Ellery treats matter, causes its culture encyclopedic be underpinned directly to his archetype, i.e. Philo Vance by  S.S. Van Dine.
But then comes the epilogue and then the mystery will be revealed after a terrifying succession of twists and turns that starting feuds and vendettas consumed in the mountains of Montenegro, through a series of clues inconsistent: a Tarzan loincloth, a piece of check, pipes, ansate crux, a package hidden under the key of a piano, will reveal the perfect plan of a sick mind, a murderer implacable, that would never have been caught if he had not committed an insignificant error: why to disinfect a wound, would have to take a bottle of tincture of iodine without the label, when there was another one available and with so much information?
One detail that only Ellery analytical mind can frame in all its light, fitting perfectly in the puzzle so that it gives a sense of the rest. 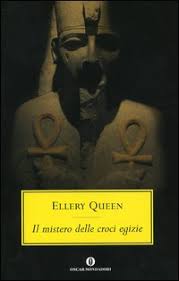 During the period in which you create this remarkable novel, however, is not the first time that we speak of Montenegro in mystery: even Rex Stout, who was also a follower of Van Dine in the early novels, he created his main character and most successful, Nero Wolfe , attributed, after a birth in Trenton New Jersey, the Montenegrin origin.
The purity of the breed had always attracted more than one writer, and that they were Montenegrins, as in the case in question, or Corsicans, as in Colomba by Prosper Mérimée, what attracted was also the impulse of feeling, not mediated by any element civilized: strong hate and strong love, interesting elements for the writers who lived life experiences in multiracial nations even then, such as France at the end of the century or America at the beginning of the twentieth century, home of all those who wanted to start a new life there.
Besides, having chosen a subject like this, and have dabbled  the novel in the blood, it is only a reference distance of everything shed in the wars of the Balkan Peninsula, that evidently to a civilized consciousness appeared to be a tribute too high and too unreasonable for not amplify well, also and only at a mystery.