Some novels  I read in a single blow, putting one or two days, and there are others that takes me a bit more time: I read this in a longer time than other equally challenging.
The thing may seem a pseudo-problem, because it related to subjectivity; in reality its importance has it: the length of the reading of this novel, in my opinion is related to the expectation that you can have. If you read it, like any novel, there is already half a disappointment, because the space before the first offense is too long, if you read it as a supernatural thriller it can be very charming; if, finally, you read it, as in my case, because it has been lauded by the great critics of the "Looked Room", the attitude of reading oscillates between love and hate.
Because, now, after reading it, and re-reading it a second time to be more secure, I didn't figure it to be called a Locked Room.
Through a Glass, Darkly (1950) was written by Helen McCloy, from a short story she had written two years before,“Through a Glass Darkly”, published in Ellery Queen’s Mystery Magazine in September 1948. She is called by many critics the greatest woman writer of detective genre in America: in addition to this novel, that is her most famous, Helen McCloy who was also married to hard-boiled writer Brett Halliday, creator of private detective Mike Shayne, wrote other novels always with his main character, the psychiatrist Basil Willing, including his other masterpiece novel Mr. Splitfoot (1968).
In several novels, McCloy addresses the issue of the crime impossible, for example in Mr. Splitfoot: Mr. Splitfoot is another name for Satan define (the charade is explanatory). It seems curious note that a character at Through a Glass, Darkly , the object of our analysis, the Director of the School Brereton, is called Mrs. "Lightfoot", as the later "Splitfoot" used elsewhere: the common denominator may be the supernatural call, which can be attributed to the characters in question. In fact, Mrs. Lightfoot is one of the people who claims as Miss Faustina Crayle, the hapless protagonist of the novel, was persecuted by his double if not the evoked with his feelings.
This Faustina is a teacher very unfortunate, because where she is teaching, tends to obscure events occur, i.e. her inexplicable dislocations in different places, in front of witnesses, who swear that while Faustina was engaged to paint, her dual sat elsewhere before their sight aghast. In fact, the origin of the double, the “Doppelganger”, can be attributed to the belief that they experience near death of a person, and that was a manifestation of supernatural origin.

This kind of ghost, which creates an aura of mystery, terror, suspicion, and slander about Faustina, real or perceived, means that she has to change seat of learning frequently. Until something happens that is not properly connected to the supernatural: Alice Aitchinson dies, a student who hated Faustina. She dies, breaking his neck, falling down a stairway.
Someone swears he saw Faustina just before the Aitchinson fall, but this is not possible, because in the meantime Faustina is miles away. It’s this a Locked Room? It is because the murderess some persons say they looked her from a distance, she would seem to be evaporated? I do not know. It is certain that this does not seem a "Locked Room" in the strict sense, as there are the qualities that make it impossible to crime, except that the murderess seems to have split in two different places. But what we will see, invests more the sphere of the supernatural or would-be than anything else.
Accidental death? Suicide or something? It 'obvious that slander now reach the summit, so much so that Basil Willing, the boyfriend of Gisela von Hohenems, a colleague of Faustina, encouraged as a psychiatrist to deal with such events para-psychic, feels the need to defend Faustina. Until that even Faustina died in a way that frees the murderess, if he was stopped, from any possible accusation against him: Faustina injured, nothing that can connect to an assault or act of violence.
She died for a heart attack, and it is Gisela find her, on a dark night in the cottage where Faustina was going to stay. A cottage that belonged to the mother of Faustina, Pink Diamond, a famous maintained high board, and before that it had belonged to one of his lovers.

The testament of Rose, entrusted to his legatee, says if Faustina were to die, the jewelry that her mother has given to daughter would be returned to their rightful owners (heirs of those who had donated to her at the time) even if there were , otherwise would be added to the rest. In short, a good motive to kill her. Why, if she died for a heart attack?
Here, too, I do not really think that there’s a Locked Room: Faustina opens the door and sees that the lighting does not work out so he needs to look for a light switch: she leaves her luggage at the door, which remains open and she enters. The taxi driver who took her home, says that in practice he did not see anyone leave, since the house was in his view until he put back into the path of the forest from which he came, but in the opposite direction. However, the murderess could have been dressed in black, and take advantage of the dark to avoid being seen. Not only. Gisela takes time to get to the cottage, time that could be used in case the killer was there, simply disappearing. But beyond that, Gisela, who is going to Faustina, invests almost a figure in the woods, revealing for a moment, in front of his eyes terrified, Faustina: how could she be there at that time, if the coroner says she was already dead in the house?
Basil Willing demonstrate that the Doppelganger was not really but…of a different nature. If it there wasn’t  a Locked Room, however, it should be a novel about the supernatural. And the method used by the killer to kill, to induce the player to have a heart attack, is the fear: fear of something ancestral, fear of his double, fear of death. 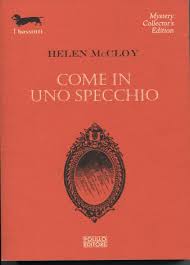 The death, "Der Tod" in German, introduced by male article because he was represented by a knight with scythe, on a black horse, appears in many poems, when the man is about to pass away. The fear of  Faustina to see herself, her Doppelganger, could be related to the fear of being about to die, what then happens. Moreover, the Doppelganger is attested in many literary texts and in the tradition of Central European countries, as a figure appeared, which could be seen only on the bias, with one eye, only near death.
Now the title of the novel, can have a triple meaning: it may allude to the verse of  St. Paul, 1 Corinthians 13:12: ".. βλεπομεν γαρ αρτι δι εσοπτρου εν αινιγματι ", "For now we see through a glass, darkly"; it could allude, in my opinion, the way to commit the second murder: ".. as in a mirror, in the dark." The protagonist was led to see herself, since the murderer has built, based on the absence of light, a mirror, transforming a large glass door, with doors opening at the center of the room, in a craft but tremendously effective mirror.
And it could finally reconnect the eponymous anthology of short stories of the great novelist and Irish writer Joseph Sheridan Le Fanu: In a Glass Darkly, in which Dr. Martin Hesselius investigates cases the limit of the paranormal and can be found in references to the theme of Doppelganger : for example in The Familiar, version of the story appeared in The Watcher in the previous collection Ghost Stories and Tales of Mystery (1851), and in Mr Justice Harbottle. Dr. Hesselius, this singular figure of detective before his time, paid to the paranormal, will also make Dr. Fell by John Dickson Carr, if not Colonel March always by Carr.
Through a Glass, Darkly, rather than being another, is a novel that mixes very cleverly and intelligently elements of thriller and the supernatural. It 's very close to or even tributary of The Burning Court by John Dickson Carr which is today still the best example of the mixture of supernatural and crime stories, so as to be taken as an object as an example of fantastic literature (besides Helen McCloy dedicated to Carr and his wife Clarice, her novel Alias ​​Basil Willing).
In this, the novel McCloy, is really built in a wonderful way, and that is tributary to the Carr's novel, it shows the ending very cleverly alludes to Carr with his double hypothesis: the rational, built by Willing at the expense of  killer; the irrational at which the killer, as long as he is the killer of course, will never be accused by any court for the murder happened while he was away: he is accused by Willing only on the basis of a series of clues, very skillfully stuck. However, they are clues, no courts : on these an English-speaking country could put on trial him.


He knows it and Willing knows it, although Basil Willing would expect at least on that occasion, an admission that at least, if it had not the merit of bringing to life Faustina, may clear the field of any supernatural dispute


Only that the accused, not only continues to profess himself innocent, but also he reinforces the supernatural thesis, so it remains the Hamlet-like doubt.


I emphasize "Hamlet doubt", because I think the end, the last line of this intense dialogue, which concludes the novel, the last page, when the murderer looking at the sky and smiling to himself, says to Willing “only God knows what happens up there”, Helen McCloy  links to Shakespeare:
“There are more things in heaven and earth, Horatio,
Than are dreamt of in your philosophy.”