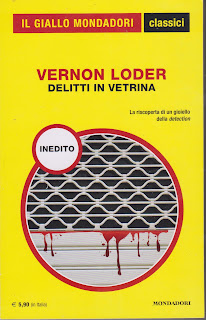 Vernon Loder was a pseudonym of John George Haslette Vahey (1881-1938), an Anglo-Irish writer who also wrote as Henrietta Clandon, John Haslette, Anthony Lang, John Mowbray and Walter Proudfoot. He worked as an architect before venturing into creative writing. Vahey died on June 15, 1938. He was an extraordinarily prolific author: he published 59 books in the period 1925-1938. His work as a Loder was of high quality, as the Collins Crime Club was selective.

The novel opens in a very unusual way: the Loder Warehouses are warehouses that have met with enormous success and a crowd of onlookers waits for them to open every day. When the shutters are lifted, after a first moment of bewilderment at the window dressing, you hear the first screams, when you see next to the mannequins, two bodies that do not seem to be such, and that turn out to be Tobias Mander, the owner , and Miss Tumour: the first killed with a gunshot wound, the second with a knife.

Immediately the investigations entrusted to Inspector Davenish proved difficult, due to the enormous problematic nature of the evidence: strips of mud were found on the roof, which seem to have been left by the wheels of a gyroplane; in an elevator, consistent blood traces were found, under the carpet which is clean; at night an engine noise was heard, but engines are in the workshops in the warehouses; at the speaker station where the caretaker Mann is, it turns out that the speakers have been disconnected due to a suitably cut wire; a Mauser gun was found in front of the bodies, which fired but not the bullet that killed Mander, and the bullet that killed him is not found; on the roof, after careful investigations, in one of the sandbags used to brake the wheels of the gyroplanes, a bullet is found, but which does not show any blood traces; bruises were found on the Tumor's arms, as if she herself had been grabbed from behind and pushed; a precious matchbox is found in the alley near the warehouses, which belongs to Jameson Peden-Hythe son of Mrs. Peden-Hythe, Mander's very wealthy financier; Jameson hated Mander; Webley, a mechanic, proves to have been perhaps the inspirer of the Gyroplane, as well as Cane, head of the department, from which Mander made huge profits; Robert Kephim, director of the department stores, was engaged to Miss Tumour, who later turns out to have also been in intimate contact with Mander, who in turn seems to have made Mrs. Peden-Hythe infatuated with him, to the point of obtaining the financing necessary to open the department stores; Miss Tumour's coat, hat, and glove are missing; finally, it turns out that Mann had been Jameson Peden-Hythe's attendant and had been recommended by him to the post of caretaker; the coat and the hat, are found together with others equal in the clothing departments of the warehouses.

The novel is a classic whodunnit, which is structured halfway between a procedural and a detection novel, and in this case the protagonist is Davenish, Inspector of Scotland Yard, who conducts the investigations, also helped by Melis, deputy commissioner of Scotland Yard.

Immediately, the presentation of the murders in this novel already brings to mind another novel of the same years, which presents a murder at the opening of the window: The French Powder Mystery (1930) by Ellery Queen. The interesting thing is that both novels, that of Ellery Queen and ours of Vernon Loder, are from 1930. Doug Greene, questioned by me, revealed to me that Vernon Loder's novel had an American edition, always in 1930. It would be necessary to see at this point which of the two appeared first in the USA, to understand which was the archetype and which the next: in my opinion, was published before the Loder e then the novel by Queen, but  it is certain that, if the opening of the novel is similar, almost the same, the two novels evolve differently in two whodunnit, absolutely different.

For how the novel proceeds, and for the pace, which is sometimes very bland, and also for the enormous number of clues, even misleading, and for the high number of true and false clues, the novel is exhausting, like well someone says. We can't wait for the end to come to understand something, because the clues are so many, and many have a double exit, one true and one false: it must be said that Loder's narrative vein very often directs the reader to a track. false, only to adjust the shot. It must therefore be acknowledged that the writer managed to get to the bottom of the novel with an acceptable solution. The only quid that is not explained and resolved is why Miss Tumour was killed: Loder through Davenish proposes that it was carried out on impulse and not premeditated, precisely by virtue of the use of the knife. However, it must also be emphasized that all the clues, whether they turn into evidence or are false, are available to the reader for months; despite this, the identification of the culprit, even if it originates from a confession of guilt of the murderer, is not based on a tangible basis, which can be the weapon used because according to the murderer this has been hidden in a place where no one never would have seen. And therefore, if the culprit, under psychological pressure, revealed everything, if instead he had not revealed that he had a .32 caliber pistol, no one could have blamed him. This is the only weak point of the story: Devenish is convinced that the culprit must necessarily be a determined person, because necessarily he should have had a gun, because others with his duties have it, and therefore assumed that he had to have a gun, that's where the bullet that killed Mander came from.

All the confusion of the clues derives from a precise design of the culprit, which pursues two purposes: to throw dust in the face of those who must investigate, and at the same time not to provide precise false leads to indict other innocent people.

I may be a fool, sir, and acted hasty—me being in such a funk and getting the wind up proper when I saw the masked man come up in the lift—but I did not want an innocent person had up for what I had done accident-like. It seemed to me the only thing was to make everything as confusing as possible so no one would be proved guilty.’ (Chapter 25)

In short, he is not a bad killer. Which would seem an oxymoron. But then it will be seen that he is not.

The gyroplane, on which a lot of the novel rotates, it is good to say, is a vehicle with a large propeller above it, which can only fly forward, like an airplane, but being very light, it must be used in the absence of wind, which otherwise could condition its tightness. It is the forerunner of the helicopter, which however lacks the rear rotor; when it starts it does not climb vertically like a helicopter, but leaps forward, like a locust.