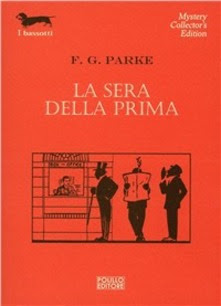 The novel was not only published in the USA in 1931 but also in France in 1932. Since then more than seventy years have passed for it to be translated in Italy. And now let's talk about F G Parke: who is he/she? It is certainly a pseudonym. Many years ago I debated this novel with Steve Lewis, an American writer, as passionate as many of us are: he argued that it could have been an unknown novel by Ellery Queen, or the fruit of the collaboration of a man and a woman. I initially espoused his very suggestive hypothesis of him, of another pseudonym besides Barnaby Ross but without having read the book and I thought he was initially right, but then, after reading the book and discussing it with Mauro Boncompagni, an Italian student (who has got one original copy), who argued that the English quality of the writing did not reach the refinement of the two cousins, I was convinced that it was the work of a woman , who sought his role model in Ellery Queen (as did Hugh Austin) and who remained under anonymity.

I say this with confidence, because for some years we have known her real name: the American geneticist Janet Akaha, revealed on site of Steve,  F G Parke was the pseudonym of “... Rose Pelswick who was the movie critic for the NY Journal American. She chose the pseudonym Parke, because she lived on 67 Park Avenue in New York City, while F G are the 6th and 7th letters of the English alphabet respectively”.

It still seemed this film critic had written only this novel. Instead I discovered that it is not the only her work: Rose Pelswick wrote at least one short story, published in Five-Novels Monthly [v15 # 2, August 1931] ed. John Burr (The Clayton Magazines, Inc., 25 ¢, 192pp +, pulp): Second Hand Stars.

Martin Ellis is a mystery writer who also writes reductions for the theater: Phantom Fingers, his latest work, promises thrills and suspense to the public until the murderer is discovered. What those present do not know is that during the Premiere of the play at the Olympyc Theater, in the third act, while the culprit has been arrested by the detective and everything is about to end with dignity, a piercing scream rises from the audience. There and then those present think of another gimmick, then they realize that something has happened: Julius Brandt, one of the producers of the major Broadway shows, has been found agonizing with his throat slit in his chair in the audience. Time to turn on the lights, and a doctor comes to Brandt, who dies in front of him. It is certain that it is a crime, because the weapon cannot be found. They close the exits, and wait for someone to arrive: Inspector Gradey of the Homicide Squad, begins the interrogations, of who was closest to the producer.

The autopsy reveals that Brandt died too soon to have just been slaughtered, and in fact the analyzes reveal that there was potassium cyanide in the wounds and the same poison had been added to the Brandy that Brandt carried in the flask below and that he had not consumed. .

First a certain Billings is suspected who has a bloodstained handkerchief, and who in the past had had something to do with Brandt: from a version of the facts that would clear him, and besides, his blood type and Brandt's are the same, and so the blood in the handkerchief cannot be attributed with certainty to Brandt.

Then it's the turn of a certain Gas Perino, a gangster: he was in the company of a movie star, Bonnie Adaire, who swears that her man didn't move, even if with acrobatic moves, given his long arms, he could have slaughtered Brandt while remaining in his place: but the evidence is not there. Then there is Ms. Manning, Brandt's ex-lover who didn't want him to marry her daughter and had threatened him with death. And finally, Bonnie Adaire is suspected, who is also the friend of the banker Sterne, who could have killed Brandt due to the fact that Adaire was not taken for a production.

Then unexpectedly the second murder takes place: Bonnie Adaire is found killed in her house in broad daylight, stabbed in the bathroom; and later a third: remains poisoned to death by cyanide, Sam, Ellis Martin's butler, who had dared to drink the brandy that Martin had asked him to bring him, which will be found to have been poisoned with cyanide. Why would anyone try to kill Martin?

Martin, after reflecting, involves police and suspects in a reconstruction of the crime in the hall, assigning each to their own seats in the theater hall, with the sole exception of Burton - who was on the radio that evening - who is given Brandt's chair, and then proceeds after a reconstruction, to the indictment of the murderer, forced to accuse himself in order not to fall victim to the same trap that he had concocted for his partner, who then decides to kill himself.

In the flap of the cover, Martin Ellis is compared to Philo Vance, and even in the same novel, the comparison is repeated. But it seems to me that there is very little, if any, from Van Dine School: Ellis as presented does not have any of the characteristics of Vance (omniscience, belonging to the upper class, friendships within the district attorney, snobbery), but rather it could be it was created by looking at the first Ellery Queen, if it is true that in the novel it is said that he writes detective stories. But beyond this there is nothing else, except that the crime also takes place in a theater, and the fact that the victim's autopsy shows the presence (also) of a poison: here, cyanide; in E. Queen tetraethyl lead (TEL (from English tetraethyl lead)

The fact that the novel was made two years after The Roman Hat Mystery is clearly an attempt to imitate its style. Beyond the attempt, however, there is nothing: when I wrote the comment, I had not yet read the book completely, and therefore I was based on the conjectures of others, even if intriguing; having said that, the style is clearly feminine, as it seemed to me then: there is such smoke, and such a chatter, a talk of environments and stars, an atmosphere of gossip and ill-concealed envy and jealousy, that only a woman could have rendered it so vividly, while missing all those bizarre clues and conceptual reasoning that are typical of the early novels of Ellery Queen (and also of other true Vandinians, such as Daly King, Rex Stout, De Puyer's Rufus King, Anthony Abbot). Here there is only smoke and mirrors, a lot. No real clue, so much so that the discovery of the culprit takes place only after the affair of the titles is revealed, and not by a logical consequence but by analogy, without there being any evidence, based on the identification of the guilty on the his psychological constraint that induces him, in a given circumstance, to accuse himself in order not to be torn apart. 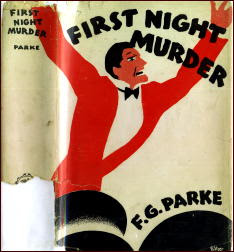 And the same ending, with the discovery of the “modus agenda” of the assassination - mind you it's a little masterpiece by Ellis, which reconstructs the various phases of the assassination, which illustrates the victim's fear of the dark, and how the murderer knew and had arranged for Brandt to sit right there, to hold the armrests in fear, is that it is not only an essay of psychological introspection but also testifies to the writer's imagination and her subtle perfidy - it is certainly not something that brings us to Van Dine or his followers, primarily Ellery Queen: in none of their novels, except a story with Reginald De Puyster by Rufus King,The Weapon That Didn't Exist, and Tragedy of X, do we have recourse to strange mechanisms to kill, which are the legacy of times precedents (see for example the bed of The Grey Room by E. Phillpotts). Moreover, here, resorting to a murderous mechanism, in my opinion, means to cheat the reader, especially since the book is stuffed with a smoky series of clues that have nothing to do with the novel, another and little: there is no it is a systematic progression of investigations with the discovery of clues that can be variously interpreted, but a culprit who literally falls from the sky. It may come to mind I repeat by association of ideas or by analogy that someone has invented something comparable to the opening mechanism of the safe, destining it to kill, but it is nevertheless only a peregrine thought, because throughout the novel the murderer, even though he appears here and there. there, he is not in the least affected by investigations.

And the killer's modus agendi, absolutely disconnected from the investigations carried out and reconstructed only in the writer's mind, because of her quality only of her, indicates her as an author who cannot be inserted for me into the S.S. Van Dine School.

Email ThisBlogThis!Share to TwitterShare to FacebookShare to Pinterest
Labels: F.G.Parke