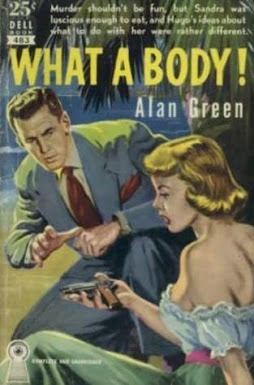 For those like me who have diet problems, gyms and a health regimen have always been a bugbear: one would like to have a physique right from birth that a few more pizzas do not necessarily mean heavier weight, an efficient and accelerated metabolism so as to dispose of excess fat, but then invariably falls back into the call of the throat. A novel, therefore, in which we speak of an island in which a health and diet regime is practiced and in which the founder of this oasis is killed, well he could not go unnoticed. Especially since it is a closed chamber!

Roland Lacourbe entered What a Body! in his list of 99 Chambers.

The novel takes place on an island where the guru of diets and exercise to the bitter end, Merlin Broadstone has placed his headquarters in a village with hotel, swimming pool, theater and solarium, and where whiskey and smoking are banned and where all those who want to get rid of extra pounds come from all over the States. Merlin lives there with his family, which he dominates with his undisputed personality and with his money; and since not everyone lives happy, but everyone would like a different life from the one that leads there, it ends up that reasons why Merlin would like him dead, so as to ensure unexpected liquidity for his relatives, there are galore. All the more so now that Merlin would even like to open a clinic, and use all the money he has.

In short, in short, on such a day, Merlini, instead of going down for breakfast at seven, does not show up. So his relatives are alarmed, the bedroom is closed from the inside and no response from Merlin to his cries. When he manages to open the door with a passe-partout, he is found dead with a wound in the back: the bullet has reached his heart. Being a colossus, it is clear that for having reached the heart passing from the lower back, whoever shot him did so from below.

Lieutenant John Hugo, a policeman with certainly not brilliant skills, is sent to the scene, especially since he seems a bit the anti-detective par excellence: as soon as he arrives, without even going through the various depositions, he goes to get a crush for one of the major suspects, Sandra Lockhart daughter of Martha (sister of Merlin) and therefore nephew of Merlin, and makes her his assistant in a certain sense, thus betraying every elementary caution. Moreover, he is very clumsy in the investigation.

Of course, it must be said that the investigation is not easy: in fact, besides Sandra, there are all the other heirs to be screened and all, more or less, had reasons to kill Merlin, who was certainly not much loved; in addition there would be the indirect heirs: Arthur Hutch husband of Hester Hutch, sister of Merlin; Nancy, the maid Carl promised to marry (after making her his mistress); Daniel Joyce, Merlin's lawyer, who, in addition to having a grudge against Merlin for a bad deal, should be his will executor and in that case pocket a nice fee; and finally Ned Dumbrow, a Republican senator who is courting Joanna, who, like Joyce, has also been swindled for a real estate speculation gone wrong, indirectly inspired by Merlin. In short, there are plenty of possible killers.

The story is moreover confused due to the same dynamics of the murder: having been hit from the bottom up, it would be assumed that the murderer had hit Merlin while at least crouching if not on his knees or lying down. However, there are two facts to disturb the dynamics even more: first, the room was found locked from the inside (there was the key in the lock which made it impossible to open even with a passe-partout without first dropping the key from the inside. of the room); second, the victim, after being killed, was dressed in pajamas: in fact, it does not have holes in its back. But why did the killer go to the trouble of dressing the body? Meanwhile, other things occurred before the arrival of the clumsy lieutenant and among these there is someone who says he saw a flash coming from the pool at 6.40 am.

So there is no Locked Room? No, that remains, because no one explains how at the time of the discovery the corpse presented a pajama without the bullet entry hole, a .38 caliber. So it is evident that after the shot, the murderer or an accomplice entered the chamber of Merlin to dress the corpse of the pajamas, then leaving the room closed from the inside

The depositions of the various suspects moreover, instead of clearing the clouds, do nothing but thicken them and moreover, having found the cartridge case, the policeman puts it in his pocket and loses it. Despite everything, the super clumsy policeman will be able to solve the matter.

I will say the novel right away, it seemed to me a parody, a triumph of parodies, a very successful attempt, moreover, to desecrate a genre and in particular that of the 1930s detective: there he was highly cultivated, expert in numerous scientific branches, fine esthete and collector of the most precious artifacts possible, he was able to probe the human soul through very elaborate processes of psychology (Philo Vance, the first Ellery Queen, Rufus King's De Puyster, Daly King's Lieutenant Lord etc), here instead we find the 'antidetective: very clumsy, wrong all possible hypotheses; instead of keeping the suspects at a distance as Archibald Hurst would do at least, he flirts with one of the most suspicious suspects, informs her of his investigations (but where is the official secret?), even finds evidence with her (the cartridge case they find it together in the pool).

It has never been seen before in this novel that the detective, instead of examining the characters and the evidence, starts exercising, having in his pocket, in his trouser pocket, the cartridge case, whom he then loses, and is found by another person he accuses of having stolen it from his pocket; a police officer on duty has never been seen not only drinking whiskey but even getting drunk;

it has never been seen that the police officer who is the one who seems to be the deus ex machina, is put on the right track by his lover's uncle, who becomes so to speak the Sherlock Holmes of history while he demotes to Doctor Watson indeed in Lestrade, even worse.

But if the detective is light and inconsistent, the same thing are all the other characters who move in this ballet, in this operetta where the action is not static, characteristic of the mysteries, but is not otherwise dynamic like the hard-boiled ones: it is a middle ground, because everything happens inside the hotel: here there is the action, but it is the action of room doors that open, close, reopen and close. And the beauty is that like any vaudeville comedy, here as a corollary of the dramatic action (i.e. murder), there is a set of lighter actions, inconsistent like the characters who produce them, and which have no direct connection with the 'homicide; if anything, the very fact of not having links with the action under investigation has the purpose of enveloping the main action like a vaporous but insubstantial cloud, diverting attention from what should be the typical lines of an investigation. But when it abounds in details in the explanation of the guidelines of physical beauty and in dietary rigor, it desecrates the healthy vein of beauty at all costs, of the perfect body, of diets. All with an irresistible rhythm, from turn-of-the-century vaudeville, with countless gags bordering on the comic if not the surreal.

John Hugo is a truly unique character: if he can't be an idiot (because then you would have to think that having become a lieutenant, other people higher than him, would have had to be much more than an idiot to promote him to lieutenant!), He is definitely a character walking on the clouds. Moreover, this levity and surreality is not only characteristic of the main detective, but also of the suspects: their stories, their behaviors, which generate continuous misunderstandings, as in the best comedy at the end of the century, are at the basis of certain events and in the same time cancel the effects of others: eg. the letter that the republican senator writes for Joanna is at the basis of an irresistible subplot, which has nothing to do with the culprit, even if he too has a part in it: the letter that relates to a series of characters, which lead to a situation of generalized chaos.

I would also like to recall a parallelism present in the novel: just as a light character is Lieutenant Hugo, so a light and naive character is the revived illegitimate son Lovechild Jones, who lived for twenty years on his grandfather's farm, huge, muscular and with the sensitivity and purity of a child, who knows animals very well but women for nothing, who appears dressed in a Roman toga and with coturni on his feet (if he were a demigod).

The surreal plot of this novel and all its variations must also make us consider the fact that if all these narrative segments had been inserted in a comedy, they would not have aroused any surprise, while they generate dismay and amazement if inserted in an enigma detective novel. which should have a certain distinct bearing at least and not grotesque.

Despite this surreal but really funny perspective, the enigma is really interesting, and although the solution of the Locked Room is trivial, how Merlin is killed and how you can explain the pajamas with no trace of a shot, it is brilliant, and brilliant is also the explanation of the real place where the shot was fired, which would refer us to Carrian solutions based on optical physics, if Commings himself had not exactly exemplified the principle on which the solution of this novel is based in one of his stories, explaining in turn thus an impossible disappearance. Surprisingly, the two works, Commings' short story and Green's novel, which resolve bis-location in the same way, were published in the same year, 1949.