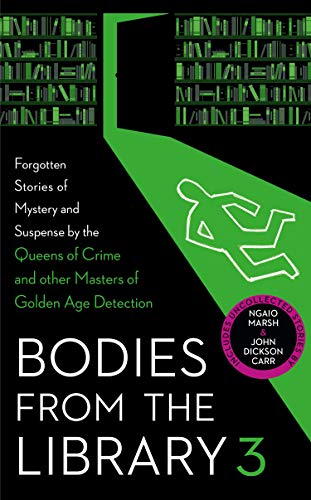 He has been researching the writers of the Golden Age since he was a teenager, and has discovered countless lost or unknown works including full length stage plays, novels and stories - sometimes written under pseudonyms. As well as writing for The Armchair Detective, CADS and other magazines (under several pseudonyms!) he has edited it introduced over 20 books. Since 2018 he has edited the Bodies from the Library series for HarperCollins whose contents have included previously unpublished or hard-to-find short stories and plays featuring Lord Peter Wimsey, Roderick Alleyn, Hercules Poirot, Nigel Strangeways, Senator Brooks U Banner, Inspector French, Sergeant Beef, Roger Sheringham and Gervase Fen as well as Agatha Christie’s first short story - previously uncollected - and dozens of other pieces. The fourth volume is published later this year and the fifth in 2022 so there is lots to look forward to!

Medawar recently collaborated with Douglas G. Greene by passing him the information of the discovery of Carr's unpublished radio plays, kept at the Library of Congress still in CBS radio script tissue, which Doug then copied and published recently for his publishing house Crippen & Landru. Medawar, however, publishes by himself everything that he can manage personally.

Lots of interesting things in the latest Bodies From the Library 3, including the extraordinary Grand Guignol, the story expanded at a novel whom Carr later published as It Walks By Night. And among them, I'll talk about an extraordinary short story by Joseph Commings, The Scarecrow Murders, not published in Senator Banner's anthology, released years ago by Crippen & Landru. The Scarecrow Murders, which was originally published for the first time in April 1948 in 10 Story Detective Magazine, is an impossible crime tale.

Eight miles from an unspecified city is the farm of the Jelke, brother and sister, who they call Blackmarsh Grange. The two have always been divided on what to do with the property, even if they live together in the same house: Hudson, a boy in his early twenties, is married to a Canadian girl, Celeste, and does not want to sell the farm, which he inherited from his parents, while his sister Beverly would like to leave. The quarrels are almost continuous. One day in August, Beverly's body is found in the shallows of the stream that passes near the farm; further upstream, Beverly's clothing is found, where the water is deeper. The girl is wearing only the bathing suit. Someone shot her from close range with a double-barreled shotgun, and half his face went away from the buckshot. Only Judson remained, who without witnessing the slightest pity for her sister went to her morgue and took off her family ring. It is clear that it is he who is suspected in the death of his sister, at least for the property that has now passed into her hands. That's why Judge Skinner turns to Senator Banner to untangle the problem. Skinner has known the boys since they were little, because he lives nearby; on the contrary, he has offered 5000 dollars on more than one occasion for the purchase of the farm. He knew Beverly who behaved like a tomboy and excelled at horseshoe throwing, and he knows Hudson who knows nothing more than to keep running the farm and knows he couldn't have killed his sister. The two go to the Jelke farm and are greeted by the repeated barking of the dogs. Skinner introduces the boy to Banner and the two understand each other immediately: they both want the killer caught. Then they meet Hudson's very young wife, Celeste: if she could, too, she would sell the farm and go away with Hudson. Then they introduce Wayne Markes their worker. He has recently fallen in love with a girl Joan Vicars, who studies at Foxchase Hall, a school near the farm. Until he solves the catch, Banner is invited to the Jelke house. In the bedroom there is nothing besides a cot and a duvet, a bedside table, a chair and a lamp. At night, Banner is awakened by a gunshot. When he connects, he dresses up, flipping the lamp over and losing in the dark to find his way, and goes down to find Hudson in the porch, dead: he was shot with buckshot from close range.

They all get off. Once again the rifle was used which is owned by Hudson, but which is not found. They see footprints that were not there before, they follow them and stop at the end in front of a field where an old scarecrow stands out in the middle: the footprints continue and stop in front of the scarecrow, which is nothing more than two cross poles and above. a tattered suit, pants, a cracked hat and the shoes that they then check are the very ones that left their footprints. Banner is flabbergasted. How is all this possible? There is only one set of footprints going towards the scarecrow, but none other coming from it. Hudson's body is removed and Celeste announces her willingness to sell the farm. Skinner agrees: he'll take the money to the farm and they'll make the sale. Meanwhile, another fact is added: Wayne Markes saw something white and sparkling dancing in the woods, in the light of the moon and then vanish. While Celeste claims she saw someone move around the house while everyone was out. Banner decides to inspect the house, after having heard the steps above himself, where no one should be: each room is the same as the others, the locks are identical and there is only one key in the house; there are no secret passages; in each room the window closes from the inside and outside there is a railing nailed to the wall. Banner decides to lock every room from the outside and even put a tilted chair under his handle. Yet, that night the sound of a shot is heard: Celeste is on the ground lifeless and wounded in the head, in the room closed from the outside and with the chair tilted. Banner sets a trap for the killer and catches him.

Meanwhile, let's say that the story is an absolute beauty. The story mixes a supernatural atmosphere (the figure covered with light that hovers and disappears in the woods and the scarecrow, with his walk to the plowed field) with superfine logic and absolutely rigorous deduction and every fact that happens has its own explanation that contributes to the incrimination. of the murderer - the bright thing; the scarecrow who is not an invention, but is a character that Celeste sees before being shot; the behavior of dogs; the fact that the killer does not kill from the outside but from the inside; the presence of a single key, which Celeste gives to Banner before being locked up in her room. The impossibility is about Hudson's death. In fact, the killer waits for Hudson dressed as a scarecrow and shoots him and then returns to the plowed field, and there he performs his magic: he manages to put his clothes back on the wooden cross without leaving footprints, but not flying. But why the scarecrow's clothes? The killer does not disguise himself to frighten (perhaps he does it when he tries to kill Celeste) but for a functional use. And this is the fundamental point, without which we understand nothing and from which Banner probably starts: why does the killer have to dress up as a scarecrow? Why does the killer act from within, and above all how he acts? Where is he hiding? The important clues to understand are mainly: the dogs, the horseshoe, the scarecrow clothing, the luminous shape in the woods. If you understand all this .. you understand everything. It is not really a whodunnit but a howdunnit, because like other Commings tales, in which the number of acting subjects is reduced to a minimum, it is also possible to identify the culprit in a sense; however, if we want to identify it on the basis of a logical discourse that explains the various impossibilities scattered throughout the story, the discourse is something else. In fact it is necessary to explain how the events happened. This is the difficulty.

Commings speaks about dogs, no scarecrow, but from the speech he makes ... It could be also a possible derivation from Carr. The killer is hiding in the house, because the attempted murders are carried out from the door. It is evident that he has to hide (Commings does not say) in the only room they do not see, which was the one that belonged to Beverly. And when Banner checks all the rooms next to each other, and therefore that too, the killer changes location, only to return to them. It is an absolutely risky way of doing because he could be discovered but it is the only one he can implement. The derivation could therefore be from a novel with Merrivale,  The Unicorn Murders