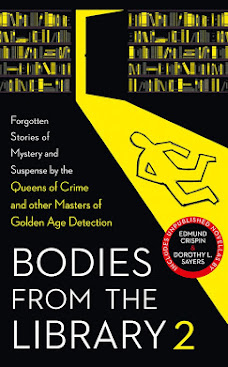 Tony told me he would have tried to buy it when it came up at auction in 2005 and he knew a copy had been donated to Wheaton.

The dating is uncertain, but since Harriet Vane does not appear, and therefore Wimsey is still a bachelor, this story must be placed in the 1920s. According to Martin, it could be placed at the end of the 1920s ( I think late 1920s ); according to Tony (who wrote a CADS article about this and other unpublished Dorothy Sayers stories: “Serendip’s Detections XVIII: Disjecta Membra”) it could be in the 1920s but not at the beginning: From internal references (“the story to Britain’s 1916-1922 Coalition Government, the Labour Party’s proposal for a one-off levy on personal capital and property to settle Britain’s war debt and to the trial of Edith Thompson and Frederick Bywaters. A note covering the typescript, not by Sayers, suggests -wrongly -that it is set in 1920-1921”) , the story is set in 1922, and it seems reasonable to accept “circa 1924” as the date of composition, as suggested in the Marion E Wade Center’s catalogue. When the typescript was sold at auction, in 2005, Sotheby’s suggested “it might be one of the stories which DLS was writing and trying to finish for Pearson's in 1924-1925”.

Lord Peter Wimsey is at Pidley Manor, home of the Deerhurst. With him is his friend Betty Carlyle, niece of Arthur Deerhurst. Arthur Deerhurst is a wealthy man, who has inherited his castle and various properties, but spends more than he earns. He blames much of his losses, to the exaggerated ambitions and immoderate passion for purchases of his wife, who seems to be made of porcelain with an always plaintive voice, made or to move towards compassion and solidarity or to be hated. Since the castle is now heavily mortgaged due to the crazy expenses, Deerhurst tries to recover by playing with the horses. In the meantime - and that's why Peter Wimsey is at his house - he asked Lord to quantify the value of his collection of books, in order to sell it if anything to recover economically: in fact, Lord Wimsey is famous for being an expert on rare and expensive books.  Betty is a friend girl of Peter and while she is there, Peter tries to pass the time also by conversing with his interlocutor, more or less. Then arrives at the home of Deerhust, Betty's other uncle, Anthony Severin. He is Arthur's half-brother. Before he went to war he was famous in high society for being a great hunter, and a polo and tennis player; but a grenade that exploded near him nearly rendered him unable to trace the life he lived before he was wounded in Vimy Ridge. Since then, he had been doing housework or making jewelry and his appearance was always pale and sickly. Moreover, he could not conduct a conversation on any subject. The heavily indebted conditions of the Deerhursts had made their marriage relationships somewhat problematic: and this was because Celia Deerhust did not seem to realize the economic pressure on her husband, and wanted to continue to lead an expensive life well above their heavily indebted economic position albeit noble. In this love-hate she had found poor Anthony's satisfaction. In fact, the two half-brothers had an opposite view of women: while the rude and tough Arthur was sure that women were intimately masochistic and liked to be mistreated, and therefore  they should also be commanded in a rude way, the pathetic Anthony thought the opposite: that the woman should be placed on a pedestal and adored, and found satisfaction eating from the palm of her sister-in-law.

A few days later, a violent quarrel broke out between Arthur and his wife Celia, due to the heavy debt situation of the family, which broke out after the defeat of that horse which, by winning, should have revived the fortunes of the family. Arthur insulted his wife even with very vulgar epithets, accusing her of the responsibility in their too expensive family life, she accused him of her passion for horse racing, and a violent altercation ensued, with her being thrown to the ground . The quarrel continued and instead of subsiding it was rekindled. Arthur, deeply upset, closed himself in his study, and then it became known that he shot himself. The police rushed the next morning, examined the crime scene and found a cartridge on the ground, the weapon congenial to the position of the suicide, and the study locked from the inside (with sealed windows and door with a key still in the lock from the inside) assumed that he had killed himself. The coroner's trial later confirmed death by suicide. But the post-death conduct of his wife who quickly got rid of her widowhood by taking refuge with her nephew Sir John Merrion has fueled the rumors of many, including her other cousins, who have begun to speak of a cleverly staged suicide murder, committed by Celia (perhaps with external support from John). That's why a long time later Betty, having to marry her beloved Sir John Merrion, a writer by profession and her cousin, asks Lord Peter, trusting his deductive and investigative skills, if Uncle Arthur killed himself or was killed. She would like in her heart that Peter would confirm her suicide, but she fears - and at the same time she wants to know before marrying one that people talk about - that instead he could point to murder as the cause of death. Which happens on time. What did ever it happen? Peter's reconstruction focuses mainly on clues that, when properly exploited, can explain murder instead of suicide:

the whiskey and soda left halfway (instead of a hard smooth whiskey);

a patrimonial relationship left incomplete: the word libra truncates ends with a flourish without having ended up in the library. Why hadn't it been over? Apart from the fact that the interruption cannot be explained by death because no one would shoot himself while writing but at least finish what he is writing, it could only have been explained by something that interrupted the writing against the writer's will;

the marks left on the key (but not detected by the police) by long and flat jeweler pliers, who grabbed it inside the lock and forced it to turn.

Basically Arthur was killed. From who? Peter does not intervene and does not confess his doubts in front of the Coroner, in order not to cause a scandal, which would also have involved those who had nothing to do with the murder (Betty), and to avoid arresting a manipulated and disabled person. Understanding who is the murderer and the instigator, is easy. The story ends with Betty crying bitterly because that John Merrion she will marry and who is Celia's nephew, has the same weaknesses as Anthony, who died later, probably suicidal, after breaking up with Celia, after Arthur's death.

In style and elegance, the story is delightful: it alternates a series of delightful dialogues with a typically British way of deducing clearly indebted to Sherlock Holmes and his followers, and about the political events of the time in which the story unfolds, with considerations related to the economic repercussions affecting the class and the wealth of the main subjects of history. Beyond the refined style, some literary quotes are put in Wimsey's mouth, but they perfectly frame the literary Dorothy Sayers: Amelia Sedley, thought Wimsey, in the robes of Cleopatra (refers to Vanity Fair: A Novel Without a Hero by William M. Thackeray); Jeanne in Une Vie? 'Elle en voulait en sa coeur a Julien de ne pas comprendre - de n'avoir pointces fines padeurs, ces delicatesses d'stinct, et elle sentait entre elle et luicomme un voile, un obstacle' - de Maupassant ( Une Vie is Maupassant's first novel).

Why did nobody publish it? I have found details that conflict with a reconstruction of a suicide and that a writer like Doroty Sayers should have known. Tony, when asked about it after my presentation, agreed. What doesn't convince me? Details that Sayers ignored or that she blamed the police and the doctor who rushed to attest to the nobleman's death. First of all, the cartridge case: what the police find and which concerns the bullet, it is impossible that it can be found. In fact, the revolvers in use by the officers of the First World War were the Webley 455: since it is a revolver, the cartridge case after the shot is not ejected as in the semi-automatic and automatic pistols, but remains inside the drum. It would have been impossible to find him on the floor of the room. Also, if Arthur had shot and killed himself, he would have had to rest the gun to his head and therefore would have had to find unburned gunpowder anyway even if the shot of a 455 revolver (1k and 200g weight almost like a Smith & Wesson 29 "44 Magnum ”) from contact would have taken half his head away. Furthermore, the fact demonstrated by Wimsey, that is, not of a suicide but of an assassination due to a shooting with two revolvers, raises another not insignificant question: it is unlikely that two people shoot themselves at the same time, and one of the two bears a wound at the right temple; if anything, the wound should have affected the face, or neck or chest or abdomen or arms, but not the temple. In short, a frontal wound and not a lateral one. Stating what is stated would cause one to have fired normally and the other to have fired by pointing the gun to the right with the arm outstretched without aiming. The fact that the police accept truths that no one would accept raises the question: either that Sayers did not think well about the plot, or that he blamed the lack of professionalism of the police for these inconsistencies, or that the police even, figuring out what had happened, had decided to hide a murder so as not to cause a scandal. Now, as you can see the matter, to be published, the story would have had to undergo a profound revision, because in the first case the writer would have lost face, in the second and in the third it would have been a hardly supportable accusation, because none police in the world and no medical doctor in the world would say things that even a child would have a hard time accepting.

Beyond this, it’s interesting that in this short story by Sayers there’s an extra bullet (found in a book) before the extra bullet by Carter Dickson (The Third Bullet). When asked Martin Edwards about the possibility that within the Detection Club, someone had talked about the story (perhaps Sayers herself) and then Carr, who was part of it, had received something, Martin denied having ever heard of it or found anything who testified to it. Furthermore  transposing the possibility of locking the door from the outside with the key from the inside, as hinted at by Carr in the Locked Room-Lecture in The Hollow Man, draws its idea from ​​Fitz James O'Brien who first introduced this trick in The Diamond Lens (1858) as quoted by John Pugmire in his article  “A Room with a Clue: An analysis of Dr. Fell’s Locked Room Lecture” in CADS 59, published in December 2010. To these my deductions, Tony replied: I agree and believe that is why the story wasn’t published.