Clifford Orr: who was he? I glean informations from the succinct biography published at the bottom of the volume published by Polillo: “Clifford Orr (1899-1951), born in Portland, Maine, manifested an early vocation for writing and, while attending Dartmouth University, he signed several musicals as librettist staged by the students of the theater course. After leaving university (without a degree even though he had completed the expected 4 years), he occasionally continued writing song lyrics, one of which was brought to success by Doris Day. For a few years he worked as a journalist at the Boston Evening Transcript and he later went on to manage the Wall Street bookstore of the Doubleday publishing house, Doran. In 1929 he made his debut with the crime film The Dartmouth Murders, which gained wide popularity thanks to the unusual setting, the campus of a famous college where three students are killed. This rather conventional mystery was followed by The Wailing Rock Murders, a much more original novel that in many ways refers to the work of the contemporary John Dickson Carr. Despite announcing a third book, Orr quit his literary career and for the next twenty years served as editorialist for The New Yorker magazine. Homosexual and alcoholic, he had an unhappy private life and died in Hanover, New Hampshire, just before he turned 52.”
I begin saying that it is certainly an excellent novel, which owes part of its fame to the atmosphere that pervades it, in harmony with the contemporary novels of John Dickson Carr: there is a cliff that due to a geo-morphological joke, emits in particular moments a noise that seems a cry. When this cry was heard in the past, a death occurred: the direct consequence is that they attributed a nefarious omen. The last time this seems to have happened was eleven years earlier when a sailor died. The fact is that the cliff again emits the excruciating cry just before a new death is discovered. Whose?  Garda Lawrence, pupil and protégé of Spaton Meech, called Spider for his monstrous deformity: a disproportionate head, which hangs curving his back in a hump, and arms long enough to reach the knees. Garda Lawrence had been invited by the spouses Farnol, Creamer and Vera and their daughter Patricia: she was a friend of her daughter who had allowed her to bring two friends, Philip Masterson and Victor Millard. Then there were other guests in the house, friends of the Farnol: Richard and Helen St. John. Garda had also invited his stepfather Spaton Meech, a famous detective, who had helped the police in intricate cases.
Everything seemed to be going well, until the tragic event occurred: Spaton goes for a ride on the beach (the house towers over the cliff) and he sees that the light in the Garda room, in the dome located in the highest part of the house, it is off, while in the other twin house (the Farnol house is separated by about a kilometer of cliff, by another twin house in all respects, also owned by the Farnol family, uninhabited for many years) there is a light on. Then the light turns on in Garda's room and then he begins to run wanting to talk to the girl before she is turned off again: he climbs the stairs, arrives at the door, knocks repeatedly, sees the darkness through the keyhole for which he thinks that a key is inserted on the other side: call without answer. Call other guests and they decide to knock down the door: the window is open and the strong ocean wind makes papers swirl among them. Turning on the light, a gruesome scene is presented to him: someone has slaughtered the girl. A good deal of time has already occurred as evidenced by the already clotted blood: yet someone has returned to the scene of the crime. No key is inserted on the other side of the door nor is it on the ground. 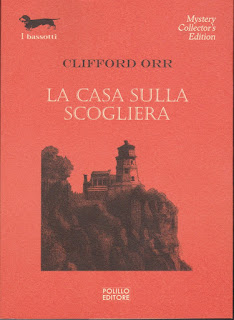 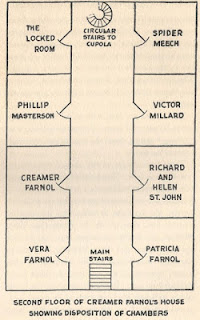 Roland Lacourbe likes this novel and testifies it to having included it in its appendix of 99 Locked Rooms and Impossible Crimes, the result of the 2007 Meeting, despite in itself the impossible crime and a claimed Locked Room that is not, are not the maximum; nevertheless his friends, the "technical" experts, Soupart, Bourgeoise and Fooz, didn’t like the same novel since they gave it the minimum evaluation in 1001 Chambres Ecloses. The double opinion reflects the ambivalence of the novel: if you see it as a delusional, hallucinatory work, full of true and false tracks, with a unique charm, the first is right; if you see it instead as a work representative of the sub-genre of Locked Room and Other Impossible Crimes, paraphrasing Bob Adey, the novel comes out significantly reduced.
I liked the novel very much. And it is testified by the speed with which I read it, also a sign of an emotional level and very high tension.
The last time I read a book with such speed, it was forty years ago, when I read Umberto Eco's The Name of the Rose.