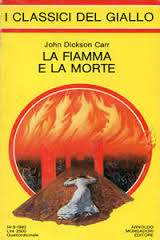 Years ago, in Italy, in a debate about the context of the best historic mystery by Carr, I gave the palm of the best to The Devil In Velvet, and as the second rewarding Fire, Burn! while others favored other novels such as Fear Is The Same. A few years later, in another debate, I changed my opinion, giving the prize for best novel of the genre ex aequo to The Devil In Velvet and Fire, Burn!
On that occasion Mauro Boncompagni, the greatest Carrian italian critic,  made reference to the judgment of a historian of collecting books, John Cooper who had designated as the best historic mystery by Carr, Fire, Burn! Now I do not know if this judgment is absolutely legitimate, but then everyone can say what he thinks. It is certain that Anthony Boucher, when this novel was published, said: “As history, as romance, as mystery, as detection, the history is splendid, with an exact and detailed picture of the Yard’s early days, an alluring love story, copious action and a solution wholly surprising”. 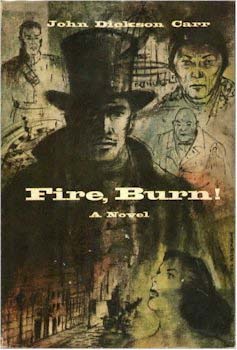 The novel is based on a jump back in the time of the Scotland Yard Inspector John Cheviot, which is by taxi and is on his way to Scotland Yard. Suddenly he loses consciousness and finds himself in London in 1829: it is in a carriage and he is going in the former headquarters of Scotland Yard. He does not know how he got there and who he is, but soon becomes aware to be a policeman also there, to be from a wealthy family, great swordsman and marksman with his gun, fighter and player, tombeur de femme for more: indeed, he is the lover of lady Flora Drayton. At Scotland Yard he is summoned as he has  asked to cooperate with the police and to put his qualities in the government service. His first case seems somewhat trivial: he must find out who steals food from the cages of birds of Mary Boyle, Countess of Cork.
John Cheviot does not believe his ears: is it possible that they ask for such a thing? The fact is that the noblewoman is one of the noble people who supports the establishment of a strong and efficient organization and therefore they can not disappoint her.
John Cheviot will go there in the company of his mistress, a too noble woman, and friend of the Countess. And there he will be reached by Alan Henley, Secretary of Scotland Yard.


John soon realizes that with the stealing of food there is also the theft of the Countess's jewels: they having been stolen from the litter box in the room of the Countess, were hidden in the feed birds. In other words there is a complicity in the Countess's house, although she blindly trust of his relatives, protected and servants. 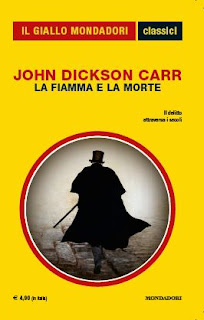 While John is trying to figure it out, a young aristocratic lady is killed before his eyes, protected from the Countess: Margaret Renfrew. The young woman was hit by an invisible and silent bullet, since neither John nor his mistress nearby nor Henley have seen or they have heard the firing or the smell of gunpowder. However, then, after to subject the corpse to autopsy, will fetch a perfectly spherical ball of lead, clean and not instead blackened by gunpowder.
John has found a small pistol, dropped from the sleeve Flora brings with her, and in the rush to protect her, he sets it aside, not delivering it and not mentioning it in his report: she says she had found it there, and that the pistol had been lost time earlier, and then therefore she thought that someone had left to accuse her. Moreover, she says, the sleeve presence is explained by the fact that one of his two gloves was broken and she did not want to do bad figure.


In the hall, Cheviot is also facing a touchy captain of the guards, Hugo Hogben.  John learns from the Countess,  Margaret Renfrew was the mysterious thief who had stolen a ring with a solitaire. And the Countess of Cork, to hide the precious things, had buried them  in the feed of drinkable birds, not foreseeing that someone had spied her and then at the night had emptyied the feed birds containers. It is suspected that Freddie Derbitt a friend of John, may have been the lover of Margaret Renfrew. Cheviot understands that the place where find clues it’s the gambling den by Volcano in London, frequented by high society, where the jewels can have been changed with money. There Cheviot will find several people: from Flora to Hogben, from Freddie Derbitt to notables and lords. And he will discover how Volcano scams people: through a rigged roulette actuated by compressed air. And at that time he will also understand how that could happen that the Renfrew may have been killed by an invisible bullet and that they have not heard noise or smell of gunpowder, because the bullet was shot from an unusual weapon that does not use gunpowder, concealed in a walking stick.
Cheviot thinks about who can be the murderer, but the idea is so crazy that no one would believe him. And so he must provide evidence and sends his men to frisk a certain apartment. And so the date and time fixed in advance, he will nail the murderer, after having humiliated his accuser, the captain Hogben that, even to take revenge on him, accused him,  testifying falsely.
Cheviot will prove the bullet that was recovered with the autopsy of Renfrew could not have been fired from the gun fell from the sleeve by lady Flora, because its diameter is more little than that could be shot, but instead it could be shot from a special weapon. The revelation will show the murderer  is one of the persons agreed there  in front of Scotland Yard chiefs: from Hogben to Lady Flora, from Henley to Miss Tremayne, from Bulmer Sergeant  to Inspector Seagrave.
Bur when Cheviot will be killed from Hogben (who is not the killer), in that moment…Cheviot will return in himself, in the twentieth century and he will understand to have dreamed: he had hit his head in the aftermath of the taxi in which he was .
And when he sees the face of Lady Flora Drayton, he understands she is his wife, whose name is…Flora.
Extraordinary historical novel, mixes suspense, detection, mystery and an impossible problem solved with customary nonchalance. The historical penetration is prodigious, the meticulousness with which the story is built, admirable and credible construction of figures. All in an era, that of George IV, described in detail: can almost see the characters as they talk, laugh, dance, play, duel.
To better appreciate the historical deepening operated by Carr, you should have under my eyes the final notes of the author's fist. The time of the novel is placed immediately after the end of the Second World War, when there was a series of tragic fogs in London, which cause dozens of fatal accidents: during one of these, it happens the car accident in which Cheviot is involved.
The step back in time is a literary device that Carr used on other occasions, and which is connected to the admixture of real and fantastic elements, to the dream experience and that of real life, which binds together form a whole inextricable from hard separate the true from the false, the real from the unreal. This dimension was already been tested in other famous novels: for example, in The Burning Court, in which one finds a person associated with two different figures, one in the present and in the past one. In that novel is, to a greater extent, the fantastic dimension, more than here, although in this novel, emerges the suspicion that the Cheviot itself has lived these events, and that he therefore is nothing more than a reincarnation in the twentieth century of Cheviot who lived in the nineteenth. But also in The Devil in Velvet, there is a jump back into the past, the result of a pact with the devil, and therefore there are fantastic elements. And even in the Fear Is the Same, is traveled the same track dive in the past. We can therefore say that the jump in the past, maybe in people who are suddenly living experiences in the past having the consciousness of having already lived, having crossed the same dangers, and having known the same people, is one of the most typical of escamotages whose Carr serve to legitimize a story of detection in the past.
However beyond the dimension of the detection and pure invention, at their maximum, Fire, Burn! is a historic mystery of remarkable invoice: so good, that in 1969 won the Grand Prix de Littérature Policière, tied with another great historical novel, where there’s historical research: The Daughter of Time by Josephine Tey. 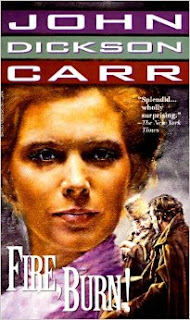 The Carr's novel is different from that of the writer yet: while there it tries historical hypothesis, that is doing very sensible hypothesis about King Richard III, mixing history and crimes, according to a course of action experienced by Carr when he was tried many years before to reconstruct the murder of Sir Edmund Godfrey, the Carr’s novel instead implements a synthesis of truth and falsehood: it inserts into a frame, next to real characters some fake characters, thus creating a historical reality entirely invented, but it could also take place. For the first time Carr, in other word, sapplies to the historical novel developed by Georgette Heyer the movements of mystery, creating the foundation for a genre that still reaps today big success.
One last thing: The title.

Fire, Burn! explicitly it refers to a feature of the same Cheviot, that is to his impetuousness and recklessness not mediated by risk weighting, whom Maine, one of two Commissioners from Scotland Yard, had blamed to him.
The resti, Fire, Burn! is nothing more than one half of a famous verse of Act Four, Scene I of Shakespeare's Macbeth:  Fire Burn, Cauldron Bubble.