As it is well known by now, the two cousins Manny and Danny QUEEN, thought at one point to stop the series of Ellery Queen. Probably they  saw themselves out of the world, with an Ellery that extricated himself with puzzles that if respected the '' enigma deductive formal "in the words by Francis Nevins, were not compatible with the address which had taken the Crime Fiction after the end of World War II: less brainy puzzles, and more action and violence. The Finishing Stroke, therefore, would have to be the "swan song" of the series. But, instead, the novel of 1958, was the last only in intention, because, five years later, in 1963, the two cousins thought to resume cooperation and continue the queenian series  with The Player on the Other Side . However, something was not right.
In fact, two years before, in essence two years after The Finishing Stroke, was published a novel called Dead Man's Tale. Radically different style, seemed squeak not a little with that idea of detective fiction that Ellery Queen had imposed until to two years before. The beauty is that it was not a solitary incident, but was followed by 26  novels all very different, because – this, the idea revolutionary base - the two cousins (Manfred Lee), entrusted to a series of minor authors, the continuation of their series, creating a kind of parallel track but radically different.
Essentially those who we usually call "queenian apocryphal ", a term that does not do justice to the experiment, were novels that broke the formal unity of the novels until to that of 1958, but (it is also true) that they had the” imprimatur” by one of the Queen, Lee, who supervised the work and often turned a  novel, in a good novel.
Among the authors, figured often also known science fiction authors, borrowed gender "mystery", as Edward D. Hoch, Theodore Sturgeon or Jack Vance, as well as authors of rank hardboiled as Hanry Kane.
Three novels of the series were written by Jack Vance, "well-known science fiction writer, who “was one among  the few writers that wrote apocryphal to have deliberately adopted queenian situations and topics”:  The Four Johns;  The Madman Theory;  A Room to Die In.

Why did he write them? In an interview, he revealed that: "... Because Ellery Queen gave me a flat fee of 3,000 dollars for each book. Which was then a lot of money! I did have to sign a contract never to reveal I actually wrote the books. Theoretically I Never Took His Name. In a way he took my good proze and did everything to let it pass as His Own".
Novel noteworthy, A Room To Die In is a variation of "Locked Room", not very orthodox, but still worth mentioning. The Apocryphal, and this novel confirms this, they were not necessarily works of fiction that had to take other ways than those visited by Queen, that not necessarily have to be alternatives to the Mystery works. What changes is the style of writing less voluptuous than by Queen, dense of meta-meanings and the fact that they are novels that have different detectives, but not Ellery. It 'also true that there are novels, included in the canon of queenian authentic works,  that aren’t  indeed authentic:  The Player on the Other Side (written by Dannay with Theodore Sturgeon) or ... And On The Eighth Day ... (written by Dannay along with Avram Davidson), or The Fourth Side of The Triangle or The House of Brass (same collaboration ).
Moreover about  queenian Locked Rooms, is not that there are a lot: The King is Dead, The Door Between, The Chinese Orange Mystery. But the solution adopted here, is at the limit: it is a work  of break.
Why? The locked room, it is quite dissimilar from the construction of a Locked Room tout court, as had been theorized by Carr, Rawson, Boucher and Derek Smith. It provided basically three possible moments (a room in which the crime occurred before, one in which occurred at the same time and finally another where the victim is killed after) and an endless array of tricks to close the door or windows . Here, instead, we resort to a solution that subverts the rule inspirational background, that’s  the murderer’s flee from a locked room.
Roland Nelson was found dead in his house, in a hermetically sealed room, with many bolts and latches to think that he feared for his safety. His death is defined as suicide by the Inspector Thomas Tarr when he shall report the circumstances to his daughter Ann, reached by a policeman at home.
For the police the case is closed, for the daughter not. She does not stop. She knew too much his father, a man full of life, that would never have killed himself. Yet the fact of the discovery of his corpse is there to remind her that it must be suicide. But she does not believe it.
By whom he was afraid of being killed? Why on his bank account is a shortfall of twenty thousand dollars and then two thousand monthly withdrawals, as if he had paid a blackmailer? And why a blackmail? 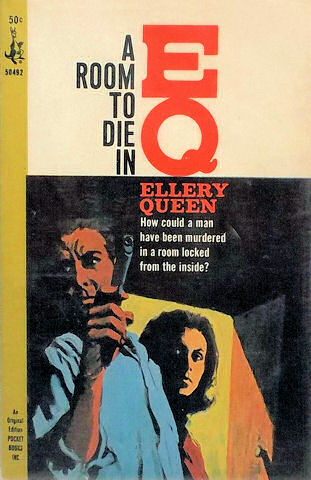 Roland Nelson had had a daughter by partner Elaine Gluck without ever having married, but then he was married with a rich woman, Pearl Maudley. The marriage,for  a certain insensitivity by Roland was shipwrecked soon but she did not want a divorce, and so one night, after being by Cypriano, a couple of friends, Pearl had died by accident.
Roland had inherited a fortune. Is it possible that he had had any responsibility in the death of his wife and anyone had discovered it? Tarr also investigates in this sense, but he doesn’t  find anything.

The private life of Roland is screened thoroughly. He was a chess player, which could also become a better player if he had persevered and had it been less bold. His usual playmate had been Alexander Cypriano, an excellent player who, once learned the death of Roland, shows up at the Roland’s daughter inviting her to lunch. Ann understands there is down something: she thinks that the reason may be a valuable board that found among the belongings of his father, ebony inlaid with rubies and diamonds, the memory of a great victory in an international tournament. Cypriano said it was his and had been given to Roland Nelson after a joke. But then she discovers that the house of Cypriano is mortgaged and registered holder of the mortgage was Pearl, from which it had passed to Roland. But  this mortgage is not found.
Even ambiguous are two other characters: the landlord of Nelson, the builder Martin Jones, and a cousin of Pearl, Edgar Maudley.
The first is unpleasant man, who speaks ill about Roland Nelson, and offends Ann; the second is a bird of prey, defrauded about the family treasure from the marriage of Pearl with Roland: a cousin that he would be heir by Pearl if Roland had not had a recognized daughter. Now he is there to ask her, when not to impose her almost the return of family assets. Ann does not intend to take advantage about the situation but not even to be taken by a fool; and so she agrees about the division of assets, especially books of rare editions, contained in two large bookcases against the wall covered with wooden panels, which divides the study room from the living room.
For most, the Ann’s mother is not found. Is she the blackmailer? It comes a her letter that obliges to think about her impending arrival. But ... nothing.
Also other things do not add up.
First of all the shots: they are heard three during the night at which died Nelson, but only a bullet has killed him and there is no sign about  the other two: either bullets or shells. Then the question about  the mortgage: she finds it was torn by Roland after he and Alexander are played to chess having as trophy for the winner, Jehane, wife of Alexander and bedfellow of Nelson.  Roland had won, she obviously had refused to be used as a thing, her husband had offered  his precious board to rival, and Roland had torn the mortgage as to seal the end of his relationship (with his lover: Jehane). And finally the footprints left on the floor: Ann in her desperate search of truth, analyzed the impossibility of the situation of his father's death, and passed to sift all, focuses her action on the two libraries and realizes that on the ground there are a number footprints circular: there should be six and nine instead she finds, although the walls are solid.
After two more murders (the husband of his mother Elaine, Harvey Gluck, strangled instead of Ann, in the bathroom of Ann; and her mother Elaine, strangled three months before and found in the trunk of her car, abandoned in a junkyard ), Ann will understand the motive of the murder and will find the solution, the culprit and will deliver him to Tarr, hopelessly in love with her. Beautiful novel, has an ending that recalls somehow the French literature of thirties: the murderer is found at the moment when you understand how was thought the Locked Room, because his criminal action identifies him as the only one that would could achieve it in that context. Beyond this, the novel (its original title was Death of a Solitairy Chess Player ) rows that it is a pleasure.

Ann seeks out, Ann tries, Ann is in danger, Ann solves. The police action is limited to mostly the confirmation and elimination of false leads, with its investigation.
Then..it’s interesting the structure of the plot: about the Locked Room it’s talking at the beginning, at the discovery of the corpse; then we talk about other things: blackmail, other characters in the drama. Then returns the speech about the Locked  Room, and once you move away from it, and this stretch and contract the rope goes even further: it is as if the Locked Room, while not always talking about it, conditioned the course of the novel, because at the end, everything we talked about, and we thought served to distract the reader “stretching the broth”, actually it finds in the final. Jack Vance is linear in his estate,  but you can see a mile away that he was not a writer paid to the Mystery. From what? From the suicide.
The police, until it’s proven otherwise, supports the theory of suicide. For the fact that the body was found in a hermetically sealed chamber, with a wound-blank. The beauty is that it does not explain everything:  strange this police! If Roland shot himself, the paraffin glove would prove it: but..has been done the paraffin glove? No. Why? Maybe - thinks the reader – the police  was so convinced about the suicide. OK. And the wound-blank? How was it possible that the murderer could fire at point-blank to Roland without  he did not fit? Without signs of a struggle had been found, scratches, or worse that the victim had been stunned or drugged. Nothing. Nothing to explain this. Strange this! Moreover, the medical examiner, who always enters in the investigation by Ellery (Sam Prouty) with his characteristic shape, you do not see him here. It’s as if naively Vance would put  axioms without prove them, that instead belongs at the normal procedure of implantation and resolution of a classic detective novel. And the gun? A  pistol .38 you don’t know  if it was property by victim or not. You don’t know how it can be entered, if it is suicide. That's all this is not explained in the novel.
In conclusion ...
The solution remains, nice. But then you realize that it's all a bluff. Because the murderer didn’t  go out from the locked room, if anything he created it.