Anthony Berkeley: Murder in the Basement ,1932 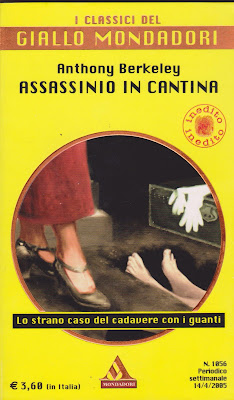 What I once again emphasize is the magnitude of Berkeley, not only one of the great masters of the British psychological police novel but also one of the most successful writers in the mechanism of multiple solutions: to frame the development in a sense, directing the reader's concentration on a given subject and then, at the appropriate time, rejecting it, and providing a solution entirely plausible, even more than it had envisaged until then. In this sense, here is the peculiarity of this novel: if for all its conduct seems a thriller as the victim is well known and well the murderer and and so the survey is only paid to see to realize the clues and turn them into overwhelming evidence , only to the end with the real solution, which runs in part from that envisaged until that moment, Sherringham can once again beat Moresby, and with a soaring, distorts the performance of the novel, directing it in the wake of Whodunnit classic.
In most, the style is crackling, never verbose and never tedious. And once again, the accuracy of Berkeley remembering true facts of blood and place them in the context of the novel affirms (The  Rainshill Case: the Deeming spouses), to make it more close to the British reader of those times. In addition, Berkeley, within the context of the narrative, put the humorous, which serve to better characterize the protagonists: as when Sherringham proposes to inspector who vowed to go away and to can not waste any more time, to be his guest at dinner: the only mention of tripe, a culinary specialty no british, and very Latin, instead convinces him to give up his commitments.

[i] Read the article: Anthony Berkeley Vs Patricia McGerr