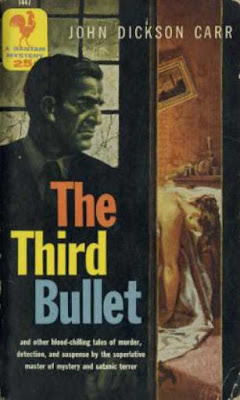 The first thing that surprises us is the difference of the surname : Marquis , for us, looks at France, March  to England. Carr seems to have forgotten the foggy atmospheres and full of mystery of bencolinian Paris , looking rather to the ghosts from UK : we remember that when Hodder & Stoughton in London in 1937 published The Third Bullet, have already gone out for a short time the  great Carter Dickson’s novels ( The White Priors Murders , The Red Widow Murders , The Unicorn Murders , The Magic -Lantern Murders , The Peacock Feather Murders , and shortly thereafter released The Judas Window ), but also novels with Fell had been published (Death -Watch , The Three Coffins , The Arabian Night Murders ) .
This short novel , is the last great thought to France : with the transition to the hazy atmosphere of London, Colonel Marquis will turn into Colonel March . So you can just say that this story is a large pot ,in which many projects boil , so many characters , so many events : You can also find something of the earlier novels . For example, the lawyer Travers , who comes out from his office , whose only exit door is guarded by his secretary , coming down the fire-stairs of the building, in coat and cylinder , might remind us another character in coat and cylinder , in The Arabian Night Murders ( there will also have a false beard , a book of recipes next to a knife driven into the body).
In my opinion, the Colonel Marquis is still tied as genesis, to the French stage by Carr : Marquis could also be French name rather than British , and it could mean a title : Marquis . If Bencolin looked to Mephistopheles as his likely referent, Marquis instead which could be referring to?
Douglas G. Greene  traces the name by Marquis , in a deliberate carrian homage to Melville Davisson Post, because one of the his characters was called just Sir Henry Marquis . However, I believe that Carr might have looked to other, increasingly from French area : after all, what does a writer do,  to invent a character? He draws from his surroundings .
In the case of Marquis the reference, for me, is a coeval carrian novel : The Burning Court, 1937. One of the characters of the novel , the female character is Marie d' Aubray that would appear to be the reincarnation of a famous poisoner of the seventeenth century, La Marquise de Brinvilliers , historical figure at the center of a murky affair of poisoning, one of the few representatives of the French aristocracy ( the time of Louis XV ), which has been entrusted to the secular arm : the Brinvilliers was tortured ( subjected to water torture ) and then burned : in French we would say " La Marquise de Brinvilliers ." Possible that did Marquise turn into Marquis? Could be, although I think that The Third Bullet should be considered closely related to The Burning Court for other reasons : they are two contemporary works , in 1937 , and in both there are negative female characters : the first has hair blacks ( Carolyn Mortlake ) , the second has brown -blonde hair ( the Marquise de Brinvilliers ) , the first is lithe and lean , the second is plump and smaller in stature. Moreover, one of the reasons base of the short novel is the confrontation-clash between the two sisters Mortlake : between the black , impetuous , charming and vulgar Carolyn who from the beginning is referred to the black sheep , and the little fair-haired and gentle Ida, the prototype that the literature often transformed into a tiger . I would like to point out another feature that jumped in my eyes: both feminine figures of the two novels are similar, despite having different features . Marie d' Aubray Marquise de Brinvilliers was a woman of insatiable sexual appetites , who on several occasions had incestuous relations with his brothers and had had many lovers including the last, fatal for her Jean -Baptiste Gaudin de Sainte -Croix ; also Carolyn Mortlake is a woman of insatiable appetites , that has had more lovers.
As the Marchioness of Brinvilliers as Carolyn Mortlake desperately need money , and both they have a father who loathes their love story, and tightens the purse strings : Dreux d' Aubray, father of the Marchioness of Brinvilliers imprisones in the Bastille the Knight de Saint- Croix, and refuses to give her daughter the huge sums of money that she uses to satisfy her appetites , while the Judge Mortlake ago so that is imprisoned Gabriel White ( who just like the Knight of Saint- Croix, has noble origins , and whose original surname , begins at the same way: Croix - Cray ) and is presented in the novel as a father who coming to the knowledge of her turbulent loves,  hardly he would leave her any money in the testament:
Finally , another parallel : just as the Marchioness Brinvilliers is accused from the letters of confession found in a metal cassette in the rubble of the laboratory in which Saint- Croix, her lover, prepared the poisons which she needed to suppress her family, as well the same Gabriel White actually the son of the Earl of Cray , in a dramatic confrontation, accused her of being a murderer : " .. I did not commit a murder. Given the circumstances, I will be forced to testify against you" ( Carter Dickson , op. cit. , p. 171). 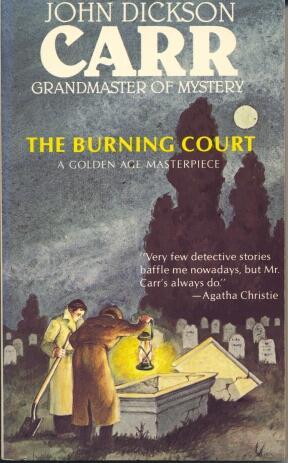 If this was not enough to establish a clear parallel between the two novels , there would also be the further complaints by the two servants : in fact at The Third Bullet, the old keeper Robinson to which  an important pivot of the staging had been given, without he understood the purpose, is who makes the most tremendous “Je t'accuse” , against the murderer : ****** " .. I know that I swore on the Bible that I would not have said a word to anyone, and I also said that , if I went to tell it, no one would believe me , but I have no desire to be hanged because of him " (Carter Dickson , op. cit. , p. 172) , while at the case of La Marquise de Brinvilliers , to accuse her, is the faithful servant and accomplice , Jean Hamelin said “La Chaussée” , who reported to the authorities from the wife of Saint Croix, under torture, accuses her about serious crimes. Thus we see that The Third Bullet if individually is part of a remarkable example of Locked Room (the explanation is really extraordinary), broken down into its components, it can be identified as the second face of the same coin, of which the other side is represented by the other novel by 1937.