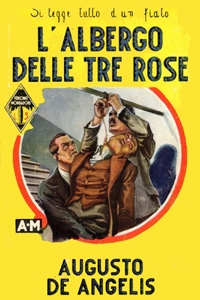 Dawn does not want to announce that terrible night: in fact another deadly event, comes to disturb De Vincenzi, Sani & Co. It is found Karin Nolan, with scissors stuck in his chest: she is immediately sent to the hospital and De Vincenzi, fearing that she might die, he does not even pull out the scissors from his chest. And it is good because, she, well stated grave, is saved. This time the murderer has failed. The series was interrupted. Who is Julius Lassinger?
Vilfredo Engel reveals the story that is the basis of this slaughter: both the brother and  the greater Alton, both Nolan had been part of the army, in particular a battery of light artillery, and in this capacity they had fought in the Boer War. But before enlisting, both Nolan and Alton both Lessinger had been partners in a company that dealt with the extraction of diamonds. Over time, Lessinger had hoarded the best diamonds , not always with his own merits, but also deceiving the two partners. This had increased the desire of the other two, who, envious, had conceived a plan to recover their stones: with the excuse to flush out the rebels, once enrolled, they had raided the property of Lessinger where he lived with the three daughters, and they had been slain, with the complicity of Engel. The precious diamonds had been hidden. Engel died shortly thereafter, Nolan time after while Alton had survived for several years, and he, old man already, he had married  with Mary Alton, right in the Hotel of the Three Roses.
And Julies Lessinger? He was the only son of the former diamond miner, enlisted as a soldier at the time of the murder of his father and sisters, and for this fact, escaped the massacre, who had vowed to take revenge. It’s obvious that  he is killing the characters. But what Layng had nothing to do? It is established that he was the son of Major Alton, who had a relationship with Ms. Flemington before she remarried with the lawyer: he had to read the last will of that Major Alton, who close to dying, ordered the division of his substance between 3 entitled: Engel, Nolan and Layng.
But, to throw more dust in the face, he’s just Besesti, the President of the Society of Pure Metals, who, when questioned from De Vincenzi, confesses the fact that he had blackmailed in the past Alton  and he forced him to finance his company, threatening to reveal what he knew from the mouth of Julius Lessinger. Only, he reveals a puzzling thing: if before  it was thought Lessinger  had an accomplice at the hotel, as he was unable to write in Italian, barely knowing English, now we learn that Lessinger may not have been the author of these crimes, because he, Lessinger, died in 1913.  So who is the murderer?
De Vincenzi will find out who is the killer not before yet another victim has been sacrificed. And not before the reading of the will has provided the final pieces because the guilty, mad, be entrusted with the care of a psychiatric prison.


The Hotel of the Three Roses is one of the finest novels of detective fiction Italian of '900: first, it is very well written, with descriptions of the characters that secure well in mind; the same psychological characteristics are extremely determined, and along with the physical ones, he realize fully particular subjects;  the story is compelling, and uses a device that is directly derived from Conan Doyle (the Valley Of Fear): something happened in the past which is the basis of the tragedy that is happening in the present. There are many red herrings, distracting the reader and lead him to consider the roads are impossible to follow, but instead the story is very simple, and also the true motive is simple; there is a Locked Room very interesting (not an expanse of snow, but a garden completely wet with rain, such that the murderer should leave wet footprints, and instead he doesn’t leave them, and he behaves in a strange way,  not like anyone who didn’t want to be seen, he would involve).
There are continuous staging: the dolls that appear; the corpse stabbed, then stripped, coated in such a way that does not see the blood, and hanged; the attempt to eliminate the rigor mortis; the appearance of the real mother of the victim; two different testaments; and finally a marriage of which you do not know anything.
This plot is typical in English novelists (such in Agatha Christie).
In De Angelis you note, however, an extreme version of the stories and characters that are very strong: there are no weak subjects, but all could be the murderer, or at least they have hidden something then joined the rest, form the puzzle reassembled. Even, Bardi, the hunchback, that starts the whole story with the anonymous letter, is a strong character: as he feels a victim of the system for his morphological diversity, he hates more than the others, even though he has feelings of protection against people he considers weak as he was. And it is precisely because he wants to save one of these people, which the notifies to the Commissioner about  something imminent that he thinks is going to happen in that house. But in his anonymous letter there is a misconception that plays in favor of events. He moves to save an innocent, but does not know that the threat is part of a far greater plot . 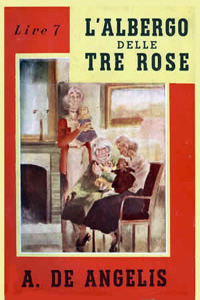 Beyond this, the critical judgment can not pinning that on other things.
The spirit in which the novel is written is affected by the creeping xenophobia against foreigners (the Italian people was perfect, the others not: in this, the fascist and Nazi propaganda were the same), but it is nevertheless a fact that there had to be otherwise the fascist censorship would not have never authorized the publication of the novel. For the rest, the novel tells the story of three crimes occurred in a hotel (and a fourth alleged, more an attempt to murder), but where several clients reside permanently. More than hotel we could call it a boarding house, with the restaurant. This is a very important detail that I recommend: in fact, years later Steeman wrote L'assassin habite au 21, a novel that takes place in a boarding house.
I would say Steeman might very well have read the novel by  De Angelis, because in those times, De Angelis was the detective novelist most famous in Italy. If Steeman in plot owes something to Agatha Christie, with regard to the place of drama he repeats what it surely already had been written by De Angelis.  Compared to Steeman and Ten Little Niggers by Christie, the De Angelis novel has, however, extremely claustrophobic atmosphere that accentuates the tension spasmodically. In some ways it is very close to The Greene Murder Case by S.S. Van Dine or The Tragedy of Y by Ellery Queen. Furthermore, for the particular that two of the three crimes, including a presumed Locked Room, take place in circumstances impossible or almost, in a hotel guarded by police, may have been tributary of Noel Vindry, that in some of his novels (for example,  Le Piège aux and diamonds and La Bête hurlante written the first, one year before and the second two years before) he let  guard the house by the police. It is one of those novels that despite having a locked room, do not highlight it, because their authors were probably not interested in being ascribed to the genre of perpetrators of impossible crimes.
Pietro De Palma