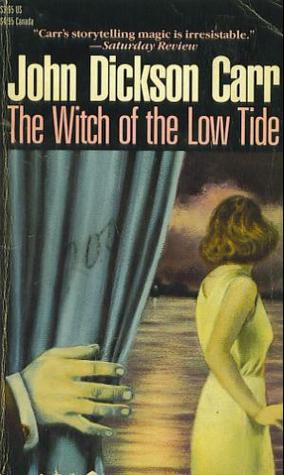 Little known novel, if not unknown, The Witch of The Low Tide, it's indeed one of the most fascinating novels by Carr.
Published in 1961 , ie in the same year of The Demoniacs, it would seem for the time collocation , a historical mystery. However, to place a novel 50 years before his time , in 1903, doesn't seem to me to write a historical novel; if anything is a clever attempt to move back the time and to be able to describe in detail the company , not only the customs, but also the clothing , architecture , discoveries, cars, the first supplies of electricity for the home . Descriptions so minute and so accurate to leave open-mouthed and at the same time able to bring down the reader into the atmosphere of the facts narrated .
The story also hides various impossible situations.
The Locked Room ( because that's what it is ) highlights several possibilities:
1 ) David Garth lied ( we would have the case in which Carr copies Agatha Christie )
2 ) David Garth told the truth.
In this case we would have :
1 ) Marion lied saying that the bomber fled from there
2 ) Marion lied saying that there was a second person who tried to kill Lady Montague
3 ) the alleged strangler vanished into thin air , being able to get out from a cellar where the windows are boarded up from the inside and also is blocked the only exit to the outside.
At first insoluble enigma – gone out from the barred cellar from the inside by two heavy locks and windows locked from the inside - followed a second equally difficult enigma to be deciphered by the means of the intellect : Betty Calder, after arguing very publicly with her sister Glynis that she reached her in her cottage cloese the sea, and after moving away by Cycling, when she arrives to appointment she gave to Garth at 18 o'clock, she finds him already in the pavilion that overlooks the beach .
Garth , however, meanwhile made ​​a terrible discovery , after he was accompanied to villa and to pavilion beside the sea, by his nephew in the car : he found Glynis, strangled , her body still warm , and the tea , packed in a boiling still pot. The reason would want the murderer was still present at the crime scene , because the only footprints in the sand are only those produced by Garth, when he approached the pavilion by the sea, footprints left also by Betty when she reached him . Garth has determined the body to be the sister of Beth , because he is kneeling before and he turned, and after he put things on purpose and then without a will he resulted the broken of a china cup. How did the murderer to strangle her there, if there are no fingerprints , and if the only person who has been seen straying towards the pavilion was the same Glynis wearing a swimsuit of Betty , origin of another quarrel between the two sisters ?
Despite having checked the reliability of statements by Betty about the identity of the sister, and having them confirmed, the police men are not sure that the Glynis murderer has not been made ​​by Betty , perhaps with the abetment by Garth.
Abbot Cullingford , deputy head of the CID , proposes to Garth, his acquaintance, that in return for accepting the proposed versions , he reveals everything he knows about the attempted strangulation of the Marion's governess and why he does not believe to her version . But Garth is an upstanding doctor , who, having been treating Marion, does not want to reveal anything that might damage her , as well as friendship . But the rejection by Garth, causes resentment of Cullingford which removes his support and leaves him in the hands of the Inspector Twigg , who can not stomach hi .
David thinks he knows who is the murderer, he knows Betty is not the murderess, and she imagines that the story told by Marion about the attempted strangulation , has flaws ; nevertheless he is willing to hold off judgment both Marion and Betty , and fatigue becomes unlikely , because Marion , trusting his word, tries in every way to accuse Betty , since the two women are incompatible : David in a dramatic face to face in which come to light unspecified sexual habits of Marion with an unspecified man, in Paris, he forces her to admit things, heared not only by him but also by someone that was eaves dropping at the door.
At this point, Garth looks for Abbot, and in the name of their friendship , he asks him to give him 24 hours, so that he can set a trap the killer and bring him to the police, asking in return as the two women are exempt to testimony and to reveal "scandalous" facts of their past. Meanwhile, it is found that the young Fielding knew Glynis, and how he escaped an attack in the Grotto , i.e. the billiards room , put in the basement of a famous hotel .
In a tight final , the murderer will prove to be just this after the Garth will make understand him to have gotten the truth , but the Inspector Twigg will be to guess how Glynis Stukeley was killed and how and who confused the events so to imply that the crime had been committed in the pavilion , leaving no footprints in the sand .
First of all, The Withch of The Low Tide is one of the greatest novels of Carr : it is a true masterpiece ! Divinely written (the descriptions , as I mentioned before, are magnificent : see the hotel, or even the clothing of the persons involved or even passers-by , and even descriptions of the cars! Carr, who you know was quite fussy , when it was to evoke atmospheres that did not belong him, documenting about periods and events , made an intensive study, no doubt about it ! On more than one occasion that he almost seems to had experienced that atmosphere, that he was found to live those experiences: almost a case of reincarnation that could excite Paul Halter (as long as he did not think of ) . 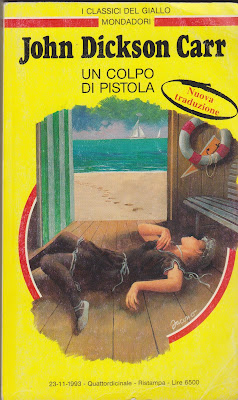 I noticed one thing , of which I had never noticed before : another stylistic particular by Carr. When Carr wants hit with emphasis a special pareticular , a name or a certain attitude , he makes a caesura: he refers to what he wants to say , then stops and usually describes something ( such as a fireplace with photographs by Betty and parents by David , or a statue or a candelabra with flickering flames or more ) and immediately picks up where he left off, saying with more emphasis that thing he said. In a sense it is always part of that so-called augmentative mechanism , which is present in some of the novels of the first period , for example It Walks By Night : to increase tension, it says something, then you stop and then when you resume dialogue , something happens and what he had said before, it is magnified , because maybe you changed the tone ( for example, the fountain that once seemed so crystal clear laugh, now it seems to do it or a sinister grin, etc. ..
I like to emphasize another detail , or rather two : at the first, the locked room is once again the result of an act. Here it relates to a given spatial and one temporal together : you remember the exemplification of the Conference by Dr. Fell about Locked Rooms at The Hollow Man and what Leona says at Nine Times Nine by Anthony Boucher about it: it refers to spatial elements (such as a room may be closed ) and temporal (when the murder was committed before, during or after the room had been closed). Well, in this novel the two elements are combined to make a truly spectacular trick: Carr in this novel tries in every way to put in the mouth by Twigg and by Garth, Le Mystère de la chambre jaune by Gaston Leroux. But .. there are also other interesting things:
Firstly, the detective who solves the mystery is Garth that is a neurologist who has read Freud's theories about psychoanalysis ( and here Freud gots to do a lot! ), and he is also an author by mystery novels , at one of which he imagines that is going to happen right here: it is as, called upon to solve the case, were an extension by Carr himself, as if he for once had said “Behold, I will solve the case!", constructing a building very complex;
Secondly, if there's a novel it can be taken as an example (not in the case of Locked Room but in the case of the impossible crime ) is Evil Under the Sun by Agatha Christie , which I think is very relevant also in the case of the used place, a beach;
Thirdly , the motive: it is the blackmail, for some unconfessable secret. Here we have to do with psychoanalysis, and in fact anything that comes from a certain type of sex drive : you could almost say that this is the most current novel by Carr, and one of the most unusual : it is very rare to find in the novels by Carr , allusions to sexual motives (whereas it is much more frequent in the novels by Ellery Queen) . But John Dickson Carr when he wrote this novel, he had gone out from England , the nation of respectability. However, the subject matter is very despicable : pedophilia. An adult who engages sexual intercourse with a teenager.
It's interesting to see how Carr , a man, a conservative man, noticed this disturbance of psychological and sexual nature, not from usual prospective for us , men of the twenty-first century, that's as an adult violence against the child, but from the typical glimpse of that time, i.e. always a disturbance of psychosexual origin who cared a child and an adult, but where the child manifested at a later time, a certain power on the adult , a sort of parallelism that other despicable attitude for which the executioner becomes a prisoner of his own victim, according to a mechanism already unveiled by Proust in his Recherche . We have to remember that Nabokov's Lolita was written in 1955: Carr may have been well impressed by this work!
The fourth particular I point out, it's like again, John Dickson Carr in the years ahead, while crafting a problem absolutly magnificent (the crime in the pavilion), when incorporates a double problem ( the locked room in the basement ) ends up focusing on just one, immediately giving of the other problem the easiest possible solution. In a similar situation , perhaps in a more youthful novel , or if Paul Halter had written it , once proposed the problem , it would be done so to give an explanation in line with the difficulty of the problem .