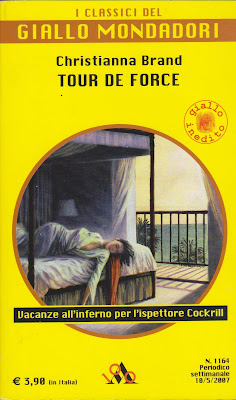 Not a chance! Doubts resume when Louli, which is saved from arrest just from Helen, she realizes that she is still loved from Leo, and then she retracts; Cockrill gives reason her and so we find ourselves at the point of first: everyone may have been to kill! Even Cecil that he was off his booby duck, he could get to the shore and swimming underwater wearing goggles and respirator by Leo, as well as Fernando could have been the killer, or Leo, or Helen, or Edith. Or to do by agreeing on most people and carrying out operations relating to the staging a little at a time. In short, everything and its opposite.
But incumbes on all the judgment by Exaltida, who must stop one, to leave others free. Who will never be the murderer? Cockrill will  be up to verify it, in a final fireworks display, in which everything will happen until the final twist, almost a serial novel.
Novel multi-faceted, it could have a good reason to call “Nothing is what it seems”: in fact, never as in this novel, one must be careful in how reality is presented because anything can have a double aspect. Anyone who suspects it will be found to have a dual identity that he had kept hidden, not necessarily linked to the murder but not to be ignored. So, if you really want to define in another way this novel, I would say it, the Doubles Novel.
Yes I know, I'm partial for the "Double" in novels, but in this case the reference to the novel by Ellery Queen, dedicated to the double, is very apt: in fact, the murderer follows a peculiar feature present in The Twin Syamese Mystery . In fact, I could say that it was precisely for this feature  I easily identified the murderer, wondering how he did it nevertheless.
In another article, dedicated to this novel, an acquaintance of mine from overseas, John Norris, called Christianna Brand  "the mistress of the multiple solution murder mystery" alluding to the presence of multiple solutions in his novels (referred to Death of Jezebel and Suddenly His Residence) I frankly, while acknowledging the presence of multiple solutions in his novels, I do not think she is the "Lady of multiple solutions" because it would seem as if it were a fact her peculiar. And for this, she distincter herself in relation to the other novelists of the genre. In fact she was not the only one to have considered several solutions related to different suspects in several of his novels: a novelist who normally has multiple solutions in his novels is, for example, Anthony Berkeley (eg. at The Poisoned Chocolates Case (1929) , in which there are six different solutions, or at The Wychford Poisoning Case, 1926, in which four solutions are contemplated; and at least four different solutions, each time presented and then exceeded, are shown in Not to Be Taken, 1937; then there’s Ellery Queen (at least, with its different solutions, The Greek Coffin Mystery, 1932, and  The Egyptian Cross Mystery, 1932); and again Leo Bruce (his famous Case for Three Detectives (1936) in which they are provided four options produced by four different characters. Instead, if I had to frame a characteristic, peculiar, in his novels, it would be the mistaken identity, playing on the duplicity of the individual characters, so that in his novels there are continuous sets of mirrors : basically anything that she shows  may not be true but in reality only be the result of a hoax resulting in misdirection. In this case of duplicity (i.e. an alleged picture and a real picture of each character) there are galore (Edith Trapp, Cecil, Leo Rodd, Fernando, Louvaine Barker, Vanda Lane) as well as there is an exchange of identity between Louli and Vanda, one of which it will be known hereafter between Cecil and some Jane Woods, and yet another that will introduce you to the final solution, which will revolutionize the cards on the table, yet. 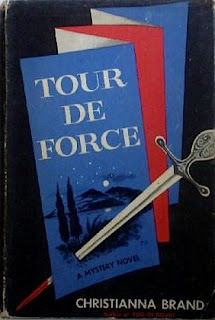 This novel contemplates an Impossible Crime situation: it is not impossible how the murderer was able to leave the room, but how he / she could have committed the murder, since no one apparently has departed to commit, being a material impossibility and temporal that one of those present may have been the murderer. Moreover, the novel comes very close to another famous novel with Impossible Crime that takes place in a similar location, Evil Under the Sun, 1941, by Agatha Christie.
The novel is also indicative for a certain sarcastic criticism of so-called Operator's Tour.
John Norris in his article about  this novel ( https://prettysinister.blogspot.it/2011/10/tour-de-force-christianna-brand.html ) also spoke about the biting criticism Christianna Brand would make, describing the bad travel conditions ((insects, hygiene, food, hotels of fluctuating requirements do not correspond to what was paid and what was promised in the initial conditions) of the tour in Italy (note the reference to the waters of Rapallo, turbid due to the presence of sewage directly into the sea): the first few pages are devoted to descriptions of fact, this kind of criticism holiday village.
In my opinion, however, this criticism of Christianna Brand has a double face. It is not only what John saw and anyone can see, but also other: may be contained a sort of paradox: in parts of Italy where tourists are accommodated in hotels, not all of high class, they eat all things not to their taste, and are exposed to conditions of unbearable heat, nothing bad happens ; where instead finally they found a piece of paradise to rest, they are living a nightmare.
One last thing I have to emphasize: the location of the tragedy.
Christianna Brand was not only a great writer of detective novels but has also she distinguished herself in children's literature (Nanny McPhee). So why don’t we think she wanted to remember, honoring, James Matthew Barrie, author of Peter and Wendy, and his Peter Pan, inventing an imaginary island in the vicinity of Sardinia, a his Neverland: San Juan el Pirata (coincidentally also into Neverland there are Pirates!)?
Suggestive hypothesis, is not it?