Mignon Eberhart , was a popular American writer . He invented the female nurse Sarah Keate , and inserted it into a his vein, distinguished from plots where there was usually a woman in danger, and in which the mysterious element fasten the romantic sentimental, a bit as the Nancy Drew mystery, novels " for ladies" , written by Carolyn Keene ( pseudonym under which lurked several authors of the Stratemeyer Syndicate, the most famous of which was Mildred Augustine Wirt Benson ) . Unlike these novels, which are dominated by the suspense , because direct more than anything else to a young audience , that relate to  events in which they move crooks and thieves, but not assassinations, and that therefore the violent element is very watered down , those by Mignon Eberhart , who began to write taking as  her mode  Mary Roberts Rinehart, marked by strong atmosphere and a thriller spasmodic , contain  murders ! Although the story is often intertwined with romantic ashes .
Mignon Eberhart wrote The novel  The Mystery of Hunting 's End, s her third novel (with Character Sarah Keate), after Patient in Room 18 (1929) and While the Patient Slept (1930).
Here nurse Sarah Keate , called into question by Detective Lance O ' Leary, his friend , is involved in an affair in which dominates the suspense but also the mystery .
Mary Kingery , daughter of financier Hubert Kingery , after five years from the death of his father ,  occurred in circumstances not fully clarified, decides he wants to know the whole truth , and for this, at the residence of his father, near Barrington, summon all  people who were present at the death of his father, who also accepted , to dispel the suspicion that there may have been involved  : Julian Barre, Jasper Fraley , Nicholas Morse , Charles Killian , they are all friends and partners , and in any case characters related to financial founded by Hubert Kingery ; Jose Paggi is a tenor and his wife Helen Paggi ; Blanche Von Turcum is a baroness ; Lucy Kingery , is the sister of Hubert and Aunt of Mary ; Brunker , is the domestic and Anne , the cook . All were five years ago. The last two continue to serve at home, and like the others, would have had valid grievances , and therefore a valid motive for desiring the death of Hubert.
Apparently , Hubert died of a heart attack, but something is not clear , and the same is not persuaded Mary that her father has died in this way : he was found in his pajamas, on the ground, without slippers , prepared to sleep in the bed and the bedside the light turned on. Inside a closed room from the inside. This circumstance authorized to think that the death had occurred due to natural causes. Later O’Leary will know from Lucy Klinger there was the work of concealment and corruption against the doctor who signed the death certificate , because he was silent on the true cause: Hubert died for a gunshot at point-blank that had caught him in the chest. She who "apparently" was seized with paralysis at the time of his brother's death , bur isn’t seized with paralysys instead, in fact it seems she had opposed in all its forms , for financial games too open-minded  of her brother, faces to enrich himself at the expense of the people around him , not caring about their lost savings : all or most of those who Mary want to spend their days in La Vedette , the lonely place in the sand .
Mary would like to avoid marrying someone who might have murdered the father, also: among her guests there is also her fiancé. 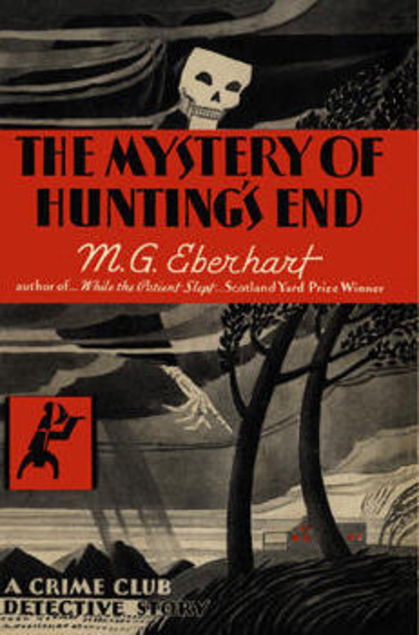 She assigns the rooms on the ground floor in a hunting lodge. Very few go to sleep on the first floor where the gallery is located directly in front of the room where he died Hubert. Among assigned rooms that not assigned also is Hubert’s room, in which three among guests (Julian Barre, Jasper Frale and Charles Killian) offer to sleep there: Jasper Fraley will end among three to sleep there. Jasper is the boyfriend of Mary . At night, while Jose Paggi and Nurse Keate detectives are talking in front of the fireplace, and can be found randomly in front of the door of the Fraley’s room, they feel before a rustle , as if someone passed on tiptoe above them, in the balcony, then they hear a knock coming from the room: Jasper is died , hit by a bullet to the heart, while wearing pajamas , barefoot and attired bed for the night. The door is open , but they were there out the door , though not in the front but the side, perjury and swear that no one came out the rooms, even if, before passing in front of the Fraley’s door bedroom , Sarah had heard two voices coming from the inside. Moreover, the windows are closed and the door that connects the room with the Barre’s room is closed by a bar . And it was not suicide , because you should find the weapon, and this is not there. So ...

“Most people, I am delighted to say, are fond of the locked room. But--here's the damned rub--even its friends are often dubious. I cheerfully admit that I frequently am. So, for the moment, we'll all side together on this score and see what we can discover… A man escapes from a locked room--well?... It's the escape from the room that bothers me. And, to see if we can't get a lead, I am going to outline roughly some of the various means of committing murders in locked rooms, under separate classifications…..
"3. It is murder, by a mechanical device already planted in the room, and hidden undetectably in some innocent-looking piece of furniture. ..
For a more large extract, see my article in this blog:

If you wish to see other killing manners described by Carr, let see the article by a friend of mine, John Pugmire in his website “Locked Room International”:

Perhaps it is for this reason, also, the novel is not overly loved.