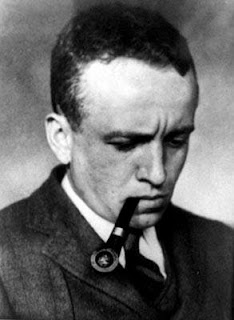 Joel Townsley Rogers is best known for The Red Right Hand, work which combines in itself the mystery , horror , fantasy and an evident streak of eccentricity . And this definitely deserves the benefit of the public and of the critics. Nevertheless Rogers, not only wrote the thing , but .. a lot more. Indeed, The Red Right Hand , is just one of many works he wrote . Rogers was not so much an author of novels, short or long , but of short stories : he wrote hundreds.

And so The Red Right Hand was an expansion of a story written and published in the same magazine which was published on The Hanging Rope: in fact, the first short story from which was made the famous novel , was published in March 1945 on New Detective Magazine, unlike The Hanging Rope was released in September 1946.
This sort of long story (but I would opt more for the meaning of " short novel " because of a little, but always substantially , the work exceeds the threshold of 100 pages that is accepted as a limit because we can start talking about the novel ) , The Hanging Rope , was forgotten for a long time and only in 1990 was rediscovered by Robert Adey ( author of the Bible of  Locked Rooms , Locked Room Murders and Other Impossible Crimes: A Comprehensive Bibliography ) and Jack Adrian, who together  created an anthology  I would say historical, The Art of the Impossible , containing short stories and tales of absolute value , where next to the most famous works (but not much) there are some almost unknown works . It 's the case of this work of Rogers.

Daniel McCue lives on the fourth floor of a large luxurious palace , in a large luxury apartment: he is a wealthy businessman who is also a politician .

Every evening,  go to visit him two of his friends: his lawyer Paul Bean, who is also a friend of his (who after leaving it , in the street is the object of a joke on the part of boys : he falls , peels one knee and palms of the hands, and bleeding back to his house, without  no one saw in that street him neither  helped him) and Father Finley, a priest devoted to the cause of abandoned cats, mild and quirky . Both , however , left the building before the murder of the old McCue , and the witness who confirms it is Boaz , the elevator man . The murder of the old man was accomplished with the aid of a bottle of champagne( brought by his friend Paul Bean, who presented it as a gift for his birthday) and then with the poker:  but if Paul Bean returns home with bloody hands , the priest enters a building not far from that where the old McCue is dead, when he knows that there's no one, to find a cat .
However, in that building, half deserted , in a bare apartment, devoid of furnishings that are not almost just a bed, a table and a typewriter, also lives the famous playwright Kerry Ott, deaf, there abiding, in absolute silence , to find the inspiration for his new comedy . 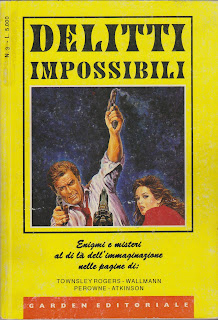 However, outside of the Baroque and refined style (an example is the description of the spider web: "It is not the sloppy and messy canvas , woven haphazardly in a quarter of hour by a teridio , but the patient work of an argiope , an octagonal  canvas, geometric , flawless, with four rays of silk. A job that takes time" ) , surprises the reader.
It reminded me - certainly daring comparison - how Marcel Proust set the writing of À la recherche du temps perdu, with a semantics tortuosity that goes round and round on a certain fact to reveal the hidden aspects as well as the visible ones . This continuous spin of situations , means that the suspicions are cast  out for things that appear the most obvious, on all the characters that appear in the plot: for example, Paul Bean , who falls across the street, mocked by the terrible sons by Kitty Kane, woman loved in the past by some characters of the story, that gives herself to the old Dan.  There would be nothing strange if falling, Bean had scraped knees and the palms of his hands were scratched and then he bled ; but .. the suspect that knocks him Townsley Rogers is that the blood can belong to old Dan ( then Paul would return later , in the Dan’s apartment) .
The references to the great tradition are countless and the same murderer who in some respects may call some other great previous novels as The Big Bow Mystery by I. Zangwill and The Peacock Feather Murders by Carter Dickson, in fact in my opinion it's much closer to Le mystère de la chambre jaune by Gaston Leroux.
The last thing I want to emphasize is that the brilliant idea by Ott on the spider's web , which essentially concludes the novel “ante litteram” , makes already know who is the murderer without reaching the final , because the final idoes not have to reveal the killer’s name, but to ensure that he comes out of the scene in spectacular fashion.
Notice how the novel gaits about the subject of blood: on the door handle , on bathroom tiles , the blood that flows from the neck of Kitty, that flows from the murderer, is perhaps the most obvious feature of a baroque horror , which is in the same time very spectacular and cinematographic  : each of the  sequences is as if it was conceived as a pose distinct from the next. The repetition of the scenes of blood permeates the plot also has a golden unhealthy , by grand guignol . The insistence on the gurgle of blood that comes gushing from the throat of Kitty, terrible because the blood is associated with the life  ( it is as if we were witnessing her death) , brings to my mind the verses of A.E. Housman : Some can gaze and not be sick , But I could never learn the trick . There 's this to say for blood and breath , They give a man a taste for death , which are mentioned by P.D.James before the beginning of her novel, A Taste for Death .
However, it is interesting to note the detail of the web of Argiope because I think it is the direct source of inspiration for other web that in another novel , more contemporary for us , covers the frame of a window, like a glass : I'm talking about La toile de Pénélopeby Paul Halter , although Paul interviewed by me long time ago while admitted to have in his library the novel by Rogers, he did not remember that particular in a book that he admitted he had read in the 80s.
(  http://deathcanread.blogspot.it/2013/08/entretien-avec-paul-halter-interview.html  ).
I think the reference was , however, settled in him , unconsciously , and then it produced the idea of a spider's web that deals with the window frame (let look the note No.4 of interview).
However , the two novels differ in the solution that is diametrically opposite : in Rogers , the presence of the web prevents the window may have been used as the entry of the elusive murderer ; in Halter, the presence of the spider's web is not in itself a fact that prevents the action, because he , overcoming the obstacle,explains  by Twist how that window could have been used .
In Halter, basically, there is the overcoming of the idea base , creating the “plus ultra” than the other, bearing in mind , however, that in Rogers, to legitimize the web is also the fact that the window was locked and nailed anyway .

In short , the idea of ​​a spider's web is the same, but everything changes.