Among all the stories presented in the anthology Italian (reduced), based on that prepared by Boucher, I will talk about the story by Clayton Rawson. 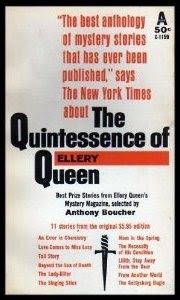 In my opinion, Rawson is the only author, who as part of the mysteries of the Locked Room, and can be historically and inventively on a par with Carr,  on his same floor. In essence, Rawson, who has an obvious gap in the literary quality of his stories, always too cold, without that inspiration divine who have the carrian works, full of extraordinary atmospheres, cancel the gap by virtue of an extraordinary inventiveness that mutes more skeptical, deriving from the core of Rawson, that of illusionist.
Some critics, especially Americans, underestimate him, because in the structure of the text, he does not give importance to certain parties, such as witnesses, or he does not emphasize the descriptions, downplaying these components to essential and instead focusing all his attention on the imagination of the plot. Rawson, in other words, focuses his attention on finding all those effects acts to impress the reader at all costs by proposing impossible challenges, made of small details that make his works, however, in my opinion, absolutely visionary. A bit like what happens in certain novels of Paul Halter, a writer who shares a certain dichotomy of opinions, some too enthusiastic, others are too critical. Not by chance the illusion enters by force in many of his works, who are true cornerstones of the more cerebral mystery, that of Locked Room.
Among the stories featured in this extraordinary anthology of Boucher, defined at the time of publication, by the New York Times “The best anthology of mystery stories that has ever been published”, the story that for me, can better represent the most extreme visionariness of imagination, is the astonishing “ From Another World” (included in the collection, published posthumously in 1979, in the anthology "The Great Merlini", but originally published in 1948). 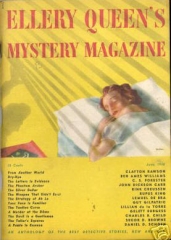 Here, in essence, there is a mystery proposed to “The Great Merlini”, a great illusionist, who occasionally helps the police to solve real impossible challenges.

For me, Death From a Top Hat is an absolute masterpiece. But even this story it is.
Probably, it was the Clayton Rawson’s reply to He Woluldn't Kill Patience, a shocking Carter Dickson’s masterpiece (John Dickson Carr), published in 1944, in which the victim is killed in a room not only closed, but sealed, so much so that even the air comes out.
Normally, when you read a Locked Room, at the base of the story is always a trick (the only time there is, is when an accident occurs that turns a normal situation in an impossible situation: for example, if an air flow slams a door, letting down the latch. And so on ..). Now this trick may involve tampering with the bolt or anything else, the door or windows, or is related to something that someone has testified to having seen (for example at It Walks By Night by Carr, Bencolin and another of his most trusted men, François, they are ready to swear that no one is out of the room;; or in The Wrong Shape by Chesterton, someone has been led to believe that what he saw was something he was not and instead) having excluded suicide.
But in this story for the first time, that I know, is put in place a trick not about the view of the witness, but  about the hearing. That is, a sensory element that more often than not comes into play with regard to the closing of a door or window, but only in the determination of what happened (a scream, sounds of a struggle, a shot), i.e. with the murder or the disappearance of something in a room locked from the inside. The only noise that is in direct relation with the closing of the door, is usually that produced by the door and the jamb that are smashed, together or the one excluding the other, for the action of something that is used to bring them down. When there is an illusion, it is associated with, if anything, to the sound of a gunshot, which serves to delay the action, attributing it to a time when the testimony is premeditated, perhaps in good faith, to those who swear that the murderess was with him when he felt the shot. Here, however, the sound of tearing of gummed paper used to seal doors and windows of the room, is directly associated with the impossibility that the murderess is able to leave the room. There would be, it is true, also the possibility that in a locked room is heard the noise of the bolt, or the key is turned, and these are sounds that are also connected with the closing of the door from the inside, but only serve to ... convince you that the door was closed. Here, however, we know that the door is closed, but even if it were not, we would think the gummed paper to establish a clear impossibility, that is not so much so that someone or something enters (into the room, canceling the experiment PES) at the presence of Drake and Rosa Rhine, but rather that someone or something bait, resulting in the possibility that the locked room  is no longer such. Moreover, you can make up a latch, but how you can make up a simple roll of gummed paper?
Here is the skill of Clayton Rawson, in convincing the illusion that there is not as it exists. And how!
The solution, simple (so that it remains open mouth), satisfies all three impossibility indicated before, by providing a solution imaginative and nailing the least likely of the killers to the test of the hypothesis, but the most likely indeed the only, to that of the facts.
A want to analyze, even more in detail, the solution proposed by Merlini, we see that in practice it is a variation ingenious (and more complicated, because it presents the aural illusion) of the trick adopted by Hake Talbot in the locked room, invented in his first novel.