Patrick Quentin : The Jack of Diamonds, 1936 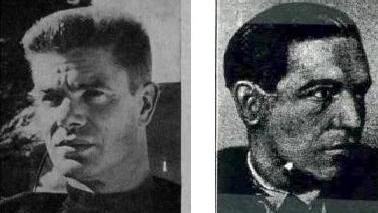 The beginning of a successful collaboration

Patrick Quentin, as Ellery Queen and others, was not only a pseudonym, but also a firm. In fact it was the combination of 4 pairs of writers, who signed differently:
the most prolific was formed by Richard Wilson Webb (1901 - 1966) and Hugh Callingham Wheeler (1912 - 1987), since he signed several novels under the symbol Quentin Patrick, most with Patrick Quentin, and all with Jonathan Stagge. In practice, the beginning of this highly successful collaboration on the 1936, when Webb, who, signing Quentin Patrick, had written two novels, first with Martha Mott Kelley (1906-2005), then, when she was married, he had written one alone and two other with Mary Louise Aswell White (1902 - 1984), he found Wheeler, an old friend. It must be said that both Webb and Wheeler, were British by birth, but then, later on, emigrating both in the United States, they had become citizens.
The Jack of Diamonds, 1936, belongs to the couple formed by Webb and Wheeler. Like the novels of the series Peter Duluth, psychological elements are mixed with elements typical of English mystery, in an extremely characteristic.
The plot is which seem remarkable.
Katherine La Motte, soprano; Sir Henry Bentley; Libby Hunt Farley, bridge player of the beau monde; John Derwood Thring III, grandson of the founder of the Tract and Treatise publishing house; Judge Homer Rock; Baroness Lili Tresckow, of  eponymous fashion house, are invited by Theodore Frensham Vanderloon, to an unusual reception, whose purpose is "To kill Mr. Joseph Starner."
It isn’t a board game such as the famous Cluedo, even if the reason is that: in the course of an evening dies a guest. But unlike the Cluedo, the aim is not to identify the murderer, as .. to locate and to kill the victim. Yeah, that's right. But why?
Who has made deliver the invitations, you can not tell he is familiar with his guests, but, like them, unfortunately he knows very well Starner, which is a vulgar blackmailer: Starner blackmails all seven persons for different reasons, but in the same way he has stolen them and he continues to steal them.