Cat and Mouse is one of the most acclaimed novels by Christianna Brand.
Julian Symons, the great critic and British novelist, wrote about Cat and Mouse: "Green for Danger is her most popular book, Cat and Mouse her best" (Julian Symons, Bloody Murder, Penguin Books, 1985, p. 192).
In my opinion, to say Cat and Mouse by Christianna Brand is her best novel, is an exaggerated judgment. But you know, Symons has been a bit exaggerated.
If Cat and Mouse is really a masterpiece or not, it is, however, a remarkable novel. And it is easy to understand: it was written by Christianna Brand, considered one of the last great representatives of the golden age of mystery.
Born in 1907 and died in 1985, is still praised for those traits for which several years ago was reported. Anthony Boucher, the great critic and novelist, many years ago said "You have to reach for the greatest of the Great Names (Agatha Christie, John Dickson Carr, Ellery Queen) to find Christianna Brand's rivals in the subtleties of the trade."
Christianna Brand had several leading figures in their novels: the main was the Inspector Cockrill, which appears not only in what is considered his masterpiece, Green for Danger (1944), but also at several others, among which we recall Suddenly at His Residence (1946), Death of Jezebel (1948), Tour de Force (1955). However, it was not the only one: in fact two other inspectors appeared in her novels. With the Inspector Charlesworth signed his debut in crime fiction (Death in High Heels, 1941), with another, the inspector Chucky, signed just Cat and Mouse (1950).
It can be said that perhaps she felt a duty to reconcile with her two characters less famous, Charlesworth and Chucky, but that this was the cause or not, it was with them she wrote her later novels: Charlesworth who had appeared at onset , was rebuked for her farewell’s novel, The Rose in Darkness (1979); Chucky instead had been made reappearing two years before in A Ring of Roses (1977).
Patricia Highsmith called Cat and Mouse "superb." Why?
First, there are a number of places and people of anthology, most of the Mystery’s properties than ever ": a typically English landscape, a Gothic castle, heavy secrets, elusive and ambiguous characters , lies and skillfully manipulated and mixed truths. Well ... all the best ingredients for a taut and vibrant novel, especially since the heroine must battle the unbelief of the people, affirming her truth in a spectacular and exhausting struggle against prejudice, as “another Don Quixote fighting against the windmills”
The story is quickly told. Katinka Jones is a journalist who is the holder of a column placed on a women's magazine. A beautiful day begins to receive letters from such Amista, who asks her advice on her love affair with a certain Carlyon. In some ways affected by the personality of Amista, he decides to go and learn, and so uses his vacation to go in Wales, which is also the homeland of his family.
In fact there is a Carlyon. He is the owner of a steep and inaccessible as well as sinister manor: it is perched in an awkward position and more to go there, you have to wade a river. But when Katinka went there, is faced with a real twist: nobody knows nothing about Amista, and as the staff of the house as Carlyon deny her existence. How is it possible?
But Katinka recognizes the castle, some details (for example a magnificent siamese cat Amista had just spoken about). The fact is that she remains amazed, especially as she remembers seeing in the hall, when she came to the door, on a pile of letters, one  sealed with a wax seal red-gold that she knows very well, because on it she read the name “Amista”. But, as it happens, just that letter, when she remembers her existence, no longer exists. Maybe that .. But Carlyon is adamant: no Amista there is in the manor, and so Katinka is put off .
But fate is in wait: on the return trip, Katinka gets a sprained ankle, and in those conditions can not retrace his steps, for which Carlyon is forced (reluctantly) to grant hospitality. What gives to Katinka the opportunity to investigate.
Katinka soon knows a self-styled policeman. Despite she for the duration of the novel doesn’t  trust him, in fact he is truely a police officer: he is the Inspector Chucky, who is investigating about Carlyon and those who dwell with him in the manor.
It develops a double investigation that proceeds along two parallel tracks: Chucky in every way tries to penetrate the atmosphere of darkness, while Jones walks alone, based on feminine instinct
and on a series of circumstances that slowly she highlights: in the manor there is a secret, and she must find out.
It is given by a mysterious woman, her face disfigured, that she is able to identify: she is Amista? And why is she disfigured? And why Carlyon does deny the existence of her.
In essence, the two investigators (one professional, Chucky, and the amateur, Katinka) go together, even if they do not know and while Chucky who is secretly in love with Katinka, he endeavors to put her in security and to prevent her by continuing to proceder on a road that is full of dangers, she doesn’t know what to think about the man who claims to be a cop but that she doesn’t believe him and then she mistrusts. 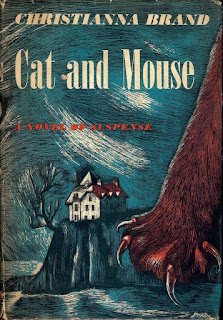 Other negative and claims characters in the novel there are not , because if it can be called a full-fledged very classic mystery, for the small number of suspects and by the turn whom the events take from the beginning, and by the whirlwind of unexpected events that punctuate the story, the novel is also a thriller: a hybrid novel, half Mystery, half Thriller. Spasmodic in some circumstances, it loses strength when it is understood that among so many people, one may be to blame.
But blame of what?
In the attic of the manor,  Chucky and Katinka find three sets of old clothes that do not seem to have been worn by the same person: what connection they have with the rest?
The disfigured woman, a real monster, appears to be the wife of Carlyon, which, however, denies once again that she is Amista. Who is she then?
She will die smashed into the void, before the eyes of Katinka.
The end will deliver us the blamer and the explanation of the many questions scattered throughout the course of the plot: who is the disfigured woman, Amista does exist or not, and to whom belong the three sets of clothes found in the attic?
The peculiarity of this disturbing mystery-thriller atmosphere is fleeting, and the characters are never what appear to be at first: even at the end she will be forced to accept the truth that Chucky is really that inspector police that she never believed he was. Carlyon is not what he seemed, the disfigured woman as well, and even the personal service and the milkmaid. Many Chinese boxes that continually open and close causing disruption.
One could say that the main merit by Brand in the writing of this novel, is to have played with the characters and the reader, putting the clues in plain view but hiding the scope at the same time by a process that we refer to Agatha Christie. However peculiar by Christianna Brand are the stylistic virtuosity, under which she can, given a certain thing, to turn it, I don’t  know how many times, and each time showing a hidden aspect and least important: in this way she can, with a number of characters very tight , to characterize them in a superb manner, and also if she highlights at the paucity of suspects an insurmountable limit, which from the first pages convinces the reader that the possible culprit may be only one, and this takes a lot of bite to the suspense, precisely because of her unique ability continually to turn the situation and put the player in the confusion, making him doubt even their legitimate beliefs, she succeeds to maintain high expectations at the novel.