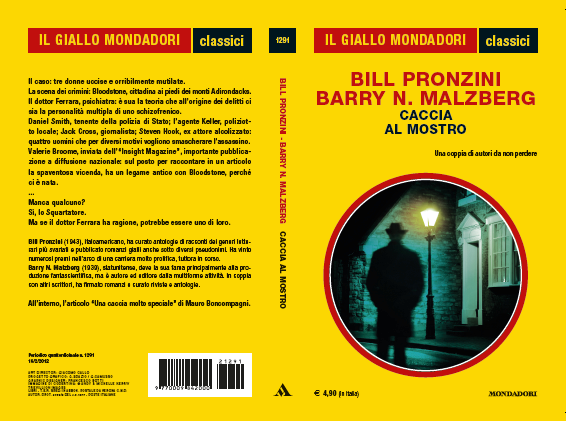 I must admit that if I didn’t buy and if I didn’t read detective stories for sale two months ago, in italian newspaper stands, I never knew who was Barry N. Malzberg. The other author, in return, yes I know! And who doesn’t know Bill Pronzini?
Mauro Boncompagni, who signed the notes in the afterword, largely about the two writers spokes, and cites facts and circumstances which, as he told me in private, has been told by two authors: he  knows both but Bill Pronzini least I know for sure. The result is a vivid and fascinating portrait. I do not deny that, thanks to Mauro notes (that I know myself well enough), I would have wanted to read the essay by Malzberg on Cornell Woolrich: Mauro speaks of it as the best piece ever written on Woolrich.


The novel in question is The Running of Beasts. It 'a thriller and it's raining there. But it is not just a thriller, is a masterpiece of a thriller.
The story itself isn’t very original: in an U.S. citizen there is a series of deaths: three women were killed, and disembowelled. A psychiatrist, Dr. Ferrara, thinks that the murderess is a schizophrenic with multiple personalities: in other words, someone who kills perhaps not even then knowing that I did, or remembering fragments of memory that can not properly fix in his mind.


The fact is that five people want for its own reasons, get your hands on the murderer:

Daniel Smith, a state police lieutenant, Steven Hook, a former alcoholic actor, Jack Cross, a journalist rampant; Keller, a local policeman, Valeria Broome, known journalist who was born in the town. The fact is that, if attention is focused precisely on these people, it’s because obviously one of them is the murderer. Already in this, the two authors diverge from the usual survey: you would normally have had to come gradually to five suspects. But here, the five actors are already on the scene from the very first pages: they are presented individually, in their stories, in their weaknesses and in their aspirations.
And almost immediately the five begin to be attracted to each other: Cook falls in love (paid) with Valeria Broome, Keller begins to suspect Cook, but more bias than for conviction based on evidence, and Smith begins his duel with Keller. This in his turn hides the skeletons in the closet: he killed a demonstrator many years before for "excess of zeal" if not "violence" and then he preferred to take refuge in the quiet town of Bloodstone to rebuild its reputation. Bloodstone, which strange name, it has :  the blood recalls. But is not the only strange thing. I say no more.
The fact is that after a while the current deaths perk: there is an attempt of murder (odd), a strange sight, and then two killings, even with the same features: two women disembowelled, and then cut with a diamond-shaped a knife on her thigh.
What you notice is the way to accentuate the tension: the actors are presented individually in great detail, the amount of space of characters is not secondary : in fact the rate is exactly given by the progressive decrease of the space given to each character in the book. First large, then - gradually - increasingly restricted, the character whose turn is appointed, does something and immediately the action and the attention of the two authors go on another. And all of this, according to the flow of a chain of events, the one after the other, the one resulting from another, perhaps that seemed unconnected, but then slowly tend to develop in a predetermined order, that given by the suspicion which tends to materialize at a certain point. And the tension becomes frantic when paragraphs, each devoted to a different character, they become almost like flashbacks.
But is he really the murderess? This is the point.
Because Pronzini and Malzberg tend, when they point to the reflector, to take a step back and say that maybe the spotlight should have been focused on another. In short, everything and its opposite. And when the test is given, and the killer is located, and hunting seems to end, with a change of scene really amazing, the killer is identified in another. That would seem to have understood that he was the killer (the famous multiple personality), and dies. All gone? No. Because with a double final, the two writers show once again that you should never trust appearances. The fact is that "The end" of the novel is really surprising, as an ending of a novel by F. Brown or Thomas Harris almost. The true ending will remain on the stomach.
What I like to emphasize is the so-called stylistic mimesis Pronzini & Malzberg take: when identifying the murderess (which is true) underestimate him, present him with words and descriptions that tend to corroborate the fact that the murderer can not be him, despite the overwhelming evidence against him would seem. It seems almost a conviction sub-liminal. And when they point the spotlight on the fake murderess, present it in such a way that the reader becomes convinced that he is the murderer and not others. The operation of mimesis is needed to prepare the surprise ending, which would not have the force of a punch in the stomach, if you do not give for granted that the murderess had already left the scene.

Finally I would like to recall that Bill Pronzini and Barry Malzberg must have at least watched "Murder Gone Mad" by Philip MacDonald: the same journalist recalls other journalist who was there, but she hasn’t the same function and the same role, and if the atmosphere is rarefied in both the novels and the victims are killed under cover of darkness, is also to say that MacDonald generates power only with the atmosphere (like the great masters of the past, for example Connington or Rinehart and Rufus King), while two writers also resort to stylistic and technical processes. It is also to indicate the ability of visionary Malzberg (well highlighted by Boncompagni in afterword) that more than one occasion, with its baroque descriptions, convinces the reader of the insanity of the murderer.
An extraordinary thriller.